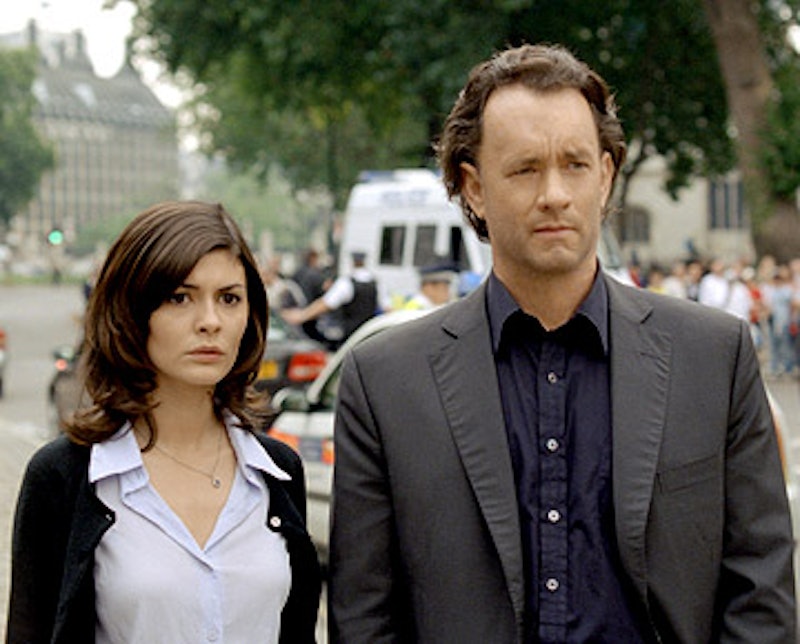 Tom Hanks' Robert Langdon is back, and this time... he got a haircut. All joking aside, it's been seven years since the last film in Ron Howard's Da Vinci Code franchise, which is of course based upon the series of novels by Dan Brown. The films began in 2006 with The Da Vinci Code, which was then followed up in 2009 with Angels & Demons. So now with the third installment, Inferno , hitting theaters, now is the perfect time to go over what happened in the other Da Vinci Code movies.

The Da Vinci Code revolves around a conspiracy about the true identity of the Holy Grail. The film begins with the murder of the curator at The Louvre in Paris, whose body is discovered posed like Da Vinci's Vitruvian Man. Authorities bring in Robert Langdon, a prominent American symbologist with a genius intellect and magnificent flowing hair, to examine the bizarre crime scene. He discovers a coded clue near the body, which leads him to other clues around Europe, all revolving around the works of Leonardo Da Vinci. Eventually, Langdon and the granddaughter of the murdered man, Sophie Neveu, uncover that the murder was part of a larger conspiracy by rogue members of the Opus Dei, who are looking to expose the truth about the Holy Grail: It's not a cup, it's Jesus' last living descendent... Sophie. Langdon and Sophie defeat the bad guys, and Sophie's secret status as the Grail remains protected and unknown to the public.

In Angels & Demons, Langdon returns with shorter but still pretty shaggy hair to deal with... The Illuminati! Surprisingly, Beyoncé and Jay Z do not make an appearance in the film, because the Illuminati plot ends up being a hoax. The pope has been killed, and the Vatican is temporarily in the hands of a young priest named Father McKenna until a new pope is chosen. But a man who says he represents the Illuminati steals a vial of dangerous anti-matter and kidnaps four of the candidates who are in line to be the next pope. He sends a message claiming he will kill the candidates and use the antimatter to destroy the Vatican. Langdon is called in, and following clues in the message, deduces where the murders of the four cardinals will take place. He is too late to save three of them, but manages to rescue the fourth. After pursuing the killer, Langdon is led back to the Vatican, where Father McKenna appears to have just survived a run-in with the killer. The vial of anti-matter is also discovered beneath the Vatican, and it's too unstable to be disabled. McKenna volunteers to fly a helicopter away with the anti-matter, and he does so, parachuting out before it explodes. His heroism results in him being elected pope, but Langdon discovers that he was behind the entire plot. McKenna had murdered the old pope and framed the Illuminati, and after being exposed by Langdon, commits suicide. A new pope is selected, an innocent one, and Langdon lives on to seek out more and better hair products.

That pretty much sums up the first two films, while Inferno will see a now short-haired(!) Langdon searching for clues about a worldwide plague in Dante's Inferno . Should be another gripping yarn filled with mystery, murder, and art, but sadly this time, no fantastic hairdos.