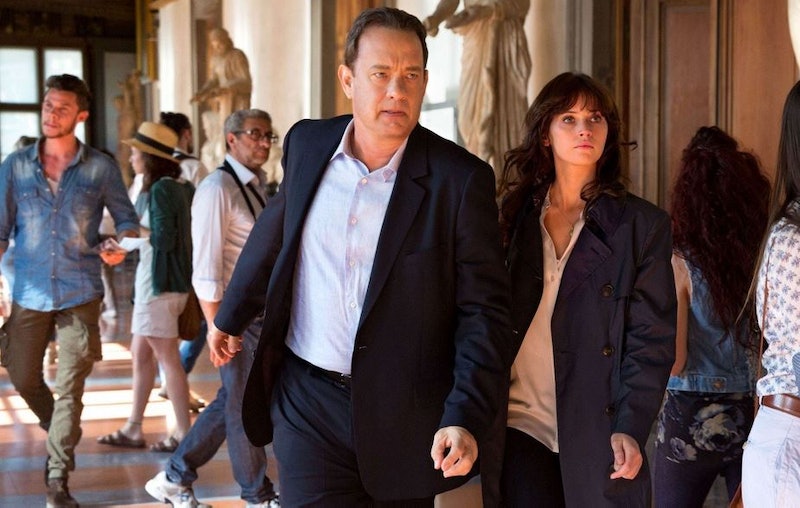 Just when you thought it was safe to go back to the Vatican, here comes another movie in Dan Brown's Da Vinci Code series. Following the success of 2006's The Da Vinci Code and 2009's Angel's & Demons, the movie sees Tom Hanks' Robert Langdon return to unravel yet another conspiracy, this time involving a virus that threatens to wipe out half the world's population. Given the film's Halloween-friendly release date of October 28, coupled with the series' history of creepy and disturbing religious imagery and the frightening new storyline, fans are probably asking: Is Inferno scary?

Inferno isn't a horror film, so it's not scary in the way something like The Exorcist is scary. The film is defined as a mystery thriller; something designed to keep you on the edge of your seat and feeling uneasy, but not necessarily a film that will cause you to sleep with the lights on. However, that's not to say that there's nothing scary in the film. The movie is rated PG-13, largely for violence and disturbing images, including "gory and grotesque images" and "disturbing scenes and nightmarish images" that "may frighten children," according to Parent Previews. So what kinds of nightmarish images are they talking about here?

Hell, basically. If you grew up religious with a frightening image of what Hell looks like, then this movie may disturb you by tapping into those fears. The film's conspiracy revolves around Dante's Inferno , the 14th century epic that describes the nine circles of Hell in grotesque detail. Alluding to this might be enough to frighten some folks, but the movie takes its hellish imagery to the next level thanks to visions Langdon experiences throughout the film. There's fire, people being tortured and suffering, and some generally gross stuff; not to mention some people in those old-timey plague doctor uniforms which I find indescribably creepy (I can't be the only one). To get an idea of what you're in for, Sony Pictures has released a 360 degree video clip of what Langdon's visions in the film are like, and it's pretty scary stuff.

To sum up, Inferno isn't a horror film, but its frightening glimpses of Hell may leave the easily rattled reaching for their Rosary beads.