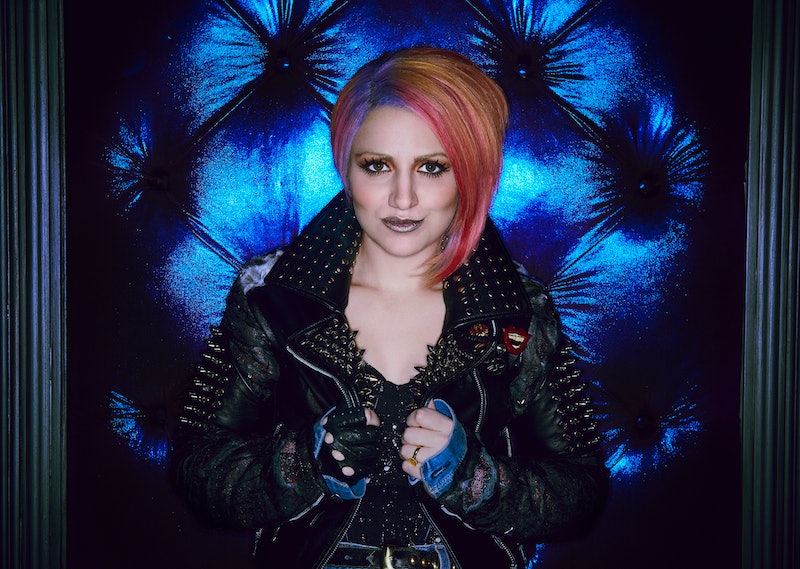 You may have pumpkin spice coming out of your pores by now, but the Halloween spirit is really going to kick up this Thursday when The Rocky Horror Picture Show: Let's Do The Time Warp Again premieres on FOX. A brand new cast — with the exception of a very special cameo appearance — will be shaking it all over the Frankenstein Place to composer Richard O'Brien's score. It's been over 40 years since Tim Curry, Susan Sarandon, Meat Loaf, and the rest of the original ensemble turned Rocky Horror into a lasting, international phenomenon. Now their sparkly shoes are filled by performers who probably grew up watching the original 1975 film. Laverne Cox stars as fabulous mad scientist Dr. Frank-N-Furter; Victoria Justice will don Janet's bra and slip; and Curry will teach "The Time Warp" in a small role as the Narrator. Frank-N-Furter has other company in that party mansion, including some groupies, of course. The queen of all those groupies is Columbia, played by Annaleigh Ashford.

In 1975, the role of Columbia was played by Australian actress and singer Nell Campbell. Ashford is also a multi-hyphenate performer. The 31-year-old actor got her start in New York theater and has found a lot of success on stage. Ashford is also a regular cast member of a premium cable drama and, last year, released a live recording from one of her NYC cabaret performances. Check out a few highlights of Annaleigh Ashford's career so far:

Ashford originated the role of Lauren, an offbeat warehouse worker with a crush on the boss, in the Broadway show Kinky Boots. Her comic timing and Cyndi Lauper-esque performance of "The History Of Wrong Guys" earned her a Tony nomination for Best Featured Actress in a Musical. The show itself took home the Best Musical trophy and a few others. It's still running, though Ashford departed in 2014.

You Can't Take It With You On Broadway

The actress won her Featured Actress Tony soon after leaving Kinky Boots. Ashford took home the award for playing candymaker Essie Carmichael in the 2014 Broadway revival of the Pultizer-winning 1936 comedic play You Can't Take It With You, by George S. Kaufman and Moss Hart. James Earl Jones and Rose Byrne also starred in the production,

Ashford popped up in the first season of the 60s-set Showtime drama as a wisecracking sex worker. By Season 4, Betty Dimello is easily the most capable, likable employee at the Masters & Johnson sex clinic.

If you're in New York and get lucky, you may be able to catch Ashford performing one of her live cabaret shows. If not, this cover of "Come Rain Or Come Shine" is just one of the sultry gems you can find on YouTube. You can also order Lost in the Stars , a recording of one of Ashford's acts at the Manhattan supper club, 54 Below.

With all these resume bullets, it must have been no trouble for Annaleigh Ashford to step into Columbia's heels. You can review her "jump to her left" and her "step to the right" when this Rocky Horror revival finally hits the airwaves Oct. 20.