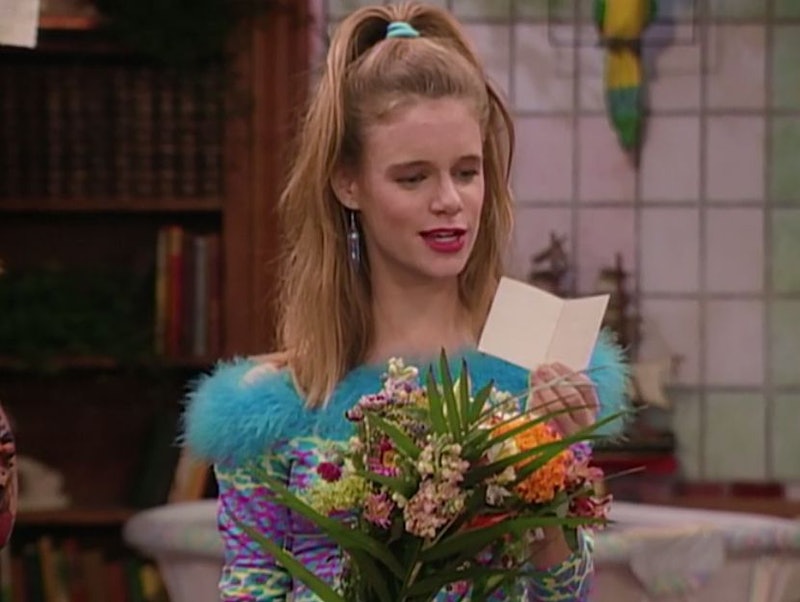 Not a lot was known about honorary Tanner kid Kimmy Gibbler's family during the original run of Full House, but it seems that's all about to change: Jimmy Gibbler, Kimmy's brother, will appear in Fuller House during Season 2. But wait — when did Kimmy get a brother? Don't worry, you aren't forgetting a character from the original series. Though some other Gibbler kids were mentioned here and there during Full House, it was never clear how many there were — so Jimmy is effectively a new character.

E! News described the new Gibbler (who will be played by Switched at Birth's Adam Hagenbuch) as "a male version of Kimmy" — as if the world needed another version of Kimmy Gibbler.

Though we never met Kimmy's family in the series and only got a few mentions of any sibling possibilities in her family, there definitely were hints. It seemed clear she wasn't an only child, and, based off her mentions of them, that they were just as quirky and eccentric as she is. That would certainly explain why the Gibbler parents would let their zany daughter get into so many crazy adventures.

1. She Mentioned Her Brother Garth

Garth sounds like he's just as much as a goofball as his sister. In Season 7, Episode 15, "The Test," Kimmy told Danny and D.J that Wake up! San Francisco couldn't do a story about a "high school junior who flunks her SAT's and ends up as a pathetic drain on society" because it would be too late: "My brother Garth already sold his life story to Hard Copy." Did Garth really try to sell that story? Sounds pretty goofy.

2. She Claimed To Have No Younger Siblings

In one episode Gibbler emapthizes with D.J. on being an oldest saying she's glad that her parents "stopped having kids after me." But that seems to mean they had children before her.

3. She Was Always Coming Over To The Tanners

Why would Kimmy be constantly hanging with the Tanners if she wasn't escaping a lot of family members at home?

Kimmy doesn't appear in the pilot episode, "Our Very First Show," but D.J mentions her while pleading for her own room: She argued that since Kimmy has three sisters and still has her own room, she should get the same privilege. These three sisters were never mentioned again.

When user WTF Full House asked the actress who plays Kimmy Gibbler, Andrea Barber, what was up with the missing Gibbler sisters, Barber responded via her personal Twitter account, "I KNOW! Total continuity error. Sisters never mentioned again. In later seasons, Kimmy had an older brother named Garth." So, the sisters were never mentioned again, but that doesn't mean they didn't still exist in the universe.

6. She Had A Lot Of Misinformation That She Spouted As Truth

A lot of times, younger siblings will take something an older sibling says as the gospel truth, whether or not it's accurate. If you remember, Kimmy would say a lot of off the wall things with the utmost conviction. Where was she learning these things?

7. Her Big Personality Could Be A Coping Mechanism

If Kimmy had to compete with a bunch of other Gibblers for attention when she was growing up, it would totally make sense for her to develop a big personality. What else would get her noticed?

8. Her Parents Didn't Have A Lot Of Time

In "These Better Not Be The Days" Kimmy reveals that she had been grounded by her mother for mouthing off. But she wasn't just grounded, she was grounded to the Tanner house because, as Kimmy put it, her mom "said if I stayed home she'd just be punishing herself." That sounds a lot like the concern of a mother who has a lot of kids with big personalities.

9. She Had No Sense Of Personal Space

Kimmy was always barging in on the Tanners in their own home without even knocking. This would makes sense if she had a lot of siblings — perhaps space was a foreign concept to her.

Whether Kimmy mentioned him in Full House or not, she's going to have a brother in Fuller House. My thoughts and prayers are with the Tanner family, because there's about to be even more Gibblers butting in on family moments than ever before.