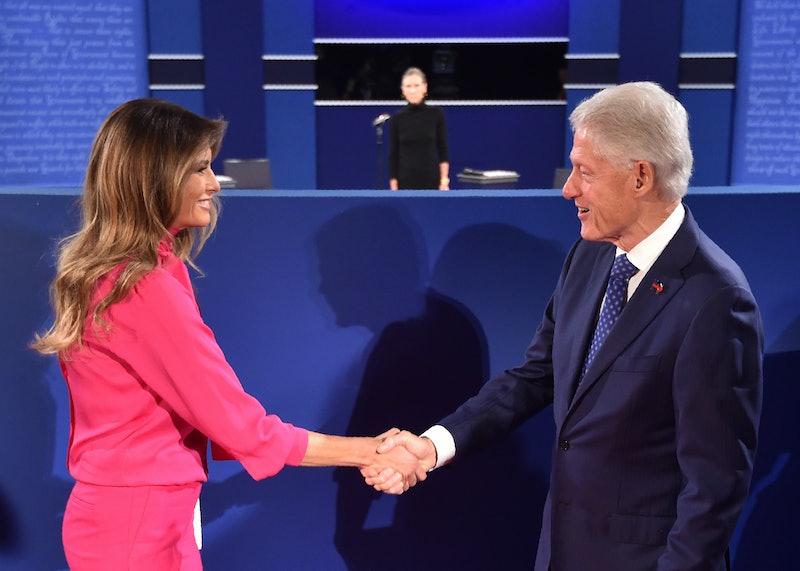 This presidential campaign has not been short on vitriol or mudslinging between the candidates. In the end, however, most everyone can agree on one thing: The lack of traditional niceties is the real signal of the end of civility in politics. The country will probably witness that on Oct. 19, as it's all but assumed that the Trumps and Clintons won't shake hands at the beginning of the third debate. This time, the Clinton camp allegedly requested a new arrangement which will help the families avoid each other entirely, according to two people up to date on the situation who spoke with The New York Times.

The reasoning behind this is that, in keeping with the shark impression from Trump you saw at the last debate, the Clinton campaign is expecting the sort of tactics that you might expect from a wounded predator determined to lash out and cause as much damage as possible. At the last debate, he attempted to make Clinton shake hands with a number of women who accused Bill Clinton of sexual assault (all claims which Bill has denied in the past). The Clintons managed to sidestep that little hurdle, but they don't want to take any chances this time.

As the spouses will be entering the hall from completely different sides closer to their seats, not even Bill and Melania Trump will have to relive the show of awkwardness that they forced viewers to endure before the last debate. On the one hand, this makes total sense, considering Melania has begun voicing her opinion that Bill's past is relevant to the election. On the other hand, it's somewhat sad. It's almost like we're really witnessing the end of decency.

Clinton and Trump, of course, did not shake hands at the beginning of the second debate, although they rectified the situation at the end. It was a bizarre spectacle, however. Why should Trump and Clinton, who despise each other so much, take a break from that to perform an action that clearly neither of them enjoyed, and which no one could have possibly enjoyed watching?

The lack of a handshake to start of the debate showed us what the real state of things is, and it's tense. The level of rhetoric, with Trump yelling about rigged elections and jailing his opponent and Clinton publicly questioning Trump's temperament, is quite frankly unprecedented in modern American politics. The candidates' and their families' desire to avoid such a small interaction as a handshake at the beginning of the debate is the manifestation of that rancor — and it's a dark reminder that no matter how much we might like to disbelieve it, it's real.