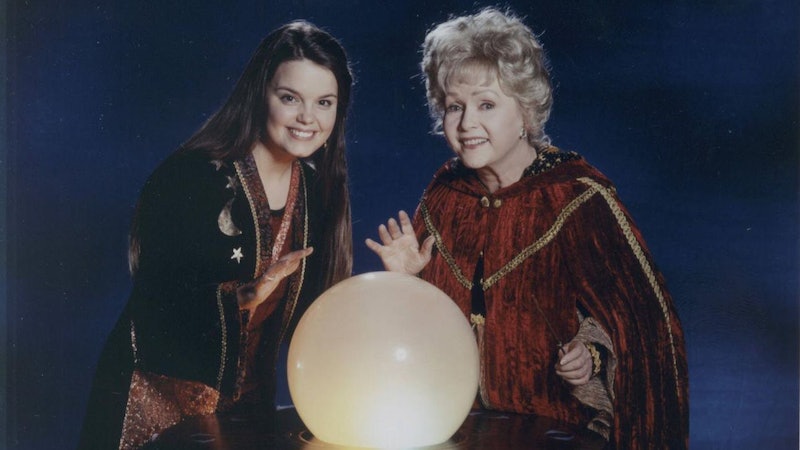 In early '90s pop culture, witches usually weren't shown in a very positive light. The Sanderson sisters are funny, yes, but they also survive by sucking the souls out of children. I still find it hard to watch the nightmare movie adaptation of Roald Dahl's The Witches, even though I adore the book. But witches started to reclaim the narrative a few years down the line. In 1998, families were introduced to 13-year-old Marnie Piper in Disney Channel's Halloweentown , one of its most popular original movies. Played by Kimberly J. Brown, Marnie is a regular kid with a fondness for all things Halloween — a condition that turns out to be hereditary. Brown played the witch-in-training in two more movies: Halloweentown II: Kalabar's Revenge and Halloweentown High. A fourth installment came out in 2006 with one major alteration: Aquamarine actress Sara Paxton played Marnie Piper, not Brown. The recast was a shock for fans and made Return To Halloweentown the odd movie out in this trilogy. But how exactly did changing the actress playing Marnie change Halloweentown ?

Recasts happen for lots of reasons. And when you're dealing with former child actors over a lengthy period of time, you might be dealing with cast members who've quit the business to pursue other things. But Brown is still acting, and Marnie is the lead of the film. More than that, she's a beloved heroine for so many kids who appreciate being reminded that weird is good. Paxton had a tough job in front of her, through no fault of her own. Here's how replacing Marnie changed Halloweentown for good.

1. It Made The Familiar Feel Unfamiliar

The purpose of extending a series is to appeal to an audience who's already attached to the material. The title and the magic remained the same, but the fourth Halloweentown movie sabotaged itself by putting such a glaring update front-and-center.

2. It Raised Questions For Fans

Why the casting switch-up? It depends on who you ask. Paxton told Hollywood.com that she didn't know why Brown wasn't participating, but was excited to get the part. Some sources, including People, allege that scheduling conflicts between Halloweentown and another project Brown was working on were to blame. But in an interview with Seventeen, Brown hinted that some other factors might have been at play and that she was absolutely up for returning. "I was disappointed for the fans," Brown said. "And I guess a little disappointed in general just because I love Marnie and love the series and just would always love to continue to play her."

Paxton is a little taller than Brown and has a different look. If pure aesthetics were the reason for the change, that's definitely a disappointment for fans — especially young women.

3. It Altered The Relationship Between Marnie & Other Characters

The Cromwell/Piper family and friends have been gelling for years. Of course, a new actress in the fold will shift the dynamic a bit, though not necessarily in a bad way.

For my money, Marnie is at her most endearing when she's doing that scrunchy-nosed grin. A-dorable.

5. Marnie Lost Some Of Her Childlike Wonder

Brown's performance struck a chord with so many kids, because — while she was brave and capable — her Marnie also kept a youthful curiosity. (Who wouldn't in Halloweentown?) Paxton's Piper was a bit more sophisticated.

DCOMs are cultural touchstones for '90s kids, because there's a feeling of ownership. Fans feel like these movies belong to them, hence the fan backlash over a main character recast. Even if Return To Halloweentown were objectively the best in the series, fans of the original would still rank it last. Nostalgia is a powerful thing.

No offense to Sara Paxton, but Kimberly J. Brown is the one true Marnie.