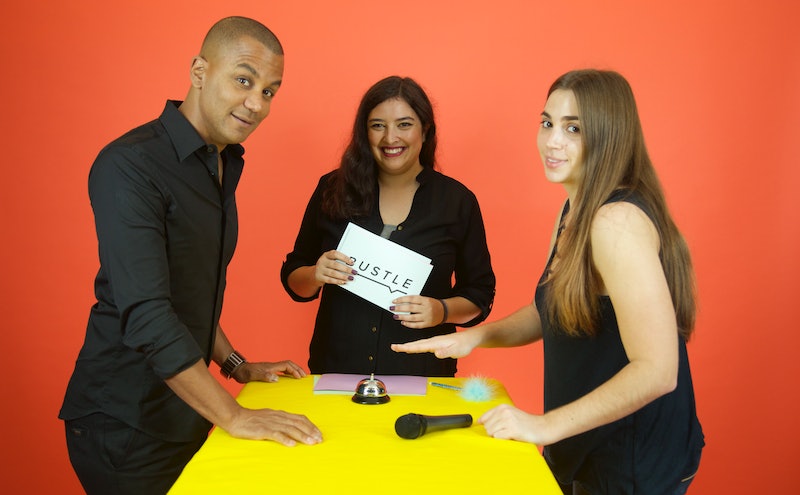 Michel Gerard was a key member of the Independence Inn and Dragonfly Inn teams on Gilmore Girls, so it’s not surprising that Yanic Truesdale, who played Michel for all seven original Gilmore Girls seasons, would have a part in the Netflix revival of the show. But, after so many years away from the show and the character, how well does Truesdale know Michel and the show he was on? Would he be able to answer the tough questions? You know, the questions that set apart Gilmore Girls fans from Gilmore Girls fanatics? Well, when Truesdale visited Bustle for a Facebook Live video trivia game, he proved that he hasn’t forgotten the important details of his lauded character.

To say that Michel was prickly on Gilmore Girls is an understatement — he was sarcastic, cynical, and not a fan of talking to people. Why Lorelai every hired him to do customer service I’ll never know, because one of the first lines Michel ever uttered on the series was, “People are particularly stupid today. I can’t talk to any more of them.” That fill-in-the-blank question was the first trivia question that Truesdale was asked at Bustle, and I’m glad that he got it right. After all, it was the line that set the tone for Michel’s whole time on Gilmore Girls.

The competition was pretty fierce in Gilmore Girls trivia, even though Truesdale claimed that he wouldn’t do that well. Questions included: “What was Michel’s mom’s name?” (It was Giselle); “Which bird was Michel afraid of?” (Swans, of course); and “The Dragonfly Inn exterior appeared in what other shows?” (The Waltons and, more recently, Pretty Little Liars ). Truesdale battled it out against Bustle TV Editor (and Gilmore Girls superfan) Sam Rullo, and it was a tight race. But, even though only one could win, both competitors left happy. There are prizes for everyone at Bustle.

As noted in the trivia game, the average Gilmore Girls script was 70-80 pages, which is longer than most hour-long dramas on account of the fact that Lorelai, Rory, and the rest of Stars Hollow speak so quickly — there are a lot of words to burn through. Truesdale mentioned that the scripts were “so thick” for the Netflix revival, and it just made me more excited for Gilmore Girls: A Year In The Life. Four 90-minute episodes full of fast-talking Gilmore goodness? It’s like a dream!

Unfortunately, Truesdale couldn’t spill any real details on Gilmore Girls: A Year In The Life — he’s as tight-lipped as Michel is obsessed with his dogs Paw-Paw and Chin-Chin. For now, Gilmore Girls fans will have to wait until all four episodes drop on November 25 on Netflix. Until then, I’ll be watching (and re-watching) the series just in case there’s another trivia session. One always has to be prepared.