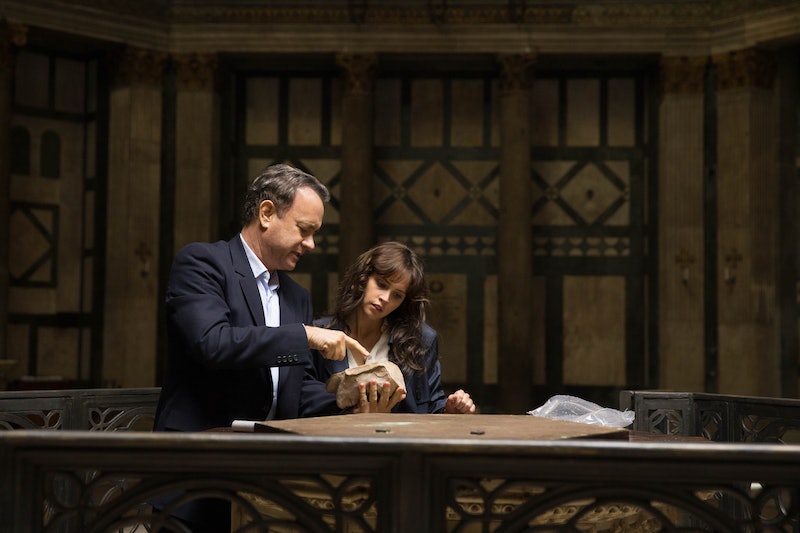 It's a truth universally acknowledged that most houses have at least one copy of a Dan Brown book floating around somewhere. The author struck pay dirt with his bestselling mystery novels Angels & Demons and The Da Vinci C ode , both which were adapted into feature films starring Tom Hanks as symbologist Robert Langdon. It's been seven years since the Angels movie, and Langdon is back with another Judeo-Christian puzzle to solve. Inferno stars Hanks and Oscar nominee Felicity Jones and is based on Brown's most recent novel with the same name. In this cryptic adventure, Langdon wakes up in an Italian hospital with selective amnesia and then must stop a genocidal maniac with the help of a map of the underworld based on Dante's Inferno. (Alternative title suggestion: National Treasure: Euro Trip.) Could this new movie revive the cat-and-mouse series? If it's a success, Inferno could get a sequel.

Columbia Pictures has not announced concrete plans to produce another Langdon movie after this one. But the source material is there. In fact, an earlier Brown novel was in development before Inferno was even published. According to The Los Angeles Times, Empire's Danny Strong was working on a screenplay adaptation of the 2009 release The Lost Symbol. (Inferno came out in 2013.) The publication also reported that Angels & Demons and The Da Vinci Code director Ron Howard had passed on helming that one.

Ultimately, The Lost Symbol movie was scrapped in favor of pursuing Inferno. Tom Hanks told Cinema Blend that the decision came down to the former's similarity to the plot of the first two films. Hanks said:

That was interesting because we actually worked on [Lost Symbol] for a while to see if there was something, and at the end of the day, Washington, D.C. and the question of the Masons was very reminiscent of the theoretical dilemmas of both The Da Vinci Code and Angels & Demons. We had to say that we don't quite think there is something [there] to truly hang on.

In a separate interview with Cinema Blend, Inferno director Ron Howard explained that his team wasn't able to "internally crack" The Lost Symbol as a movie. Fortunately, if he and Hanks want to make another Langdon flick, they won't have to go back to that well unless they want to. In September, Entertainment Weekly reported that Dan Brown's fifth Robert Langdon mystery, Origins, will be released Sept. 27, 2017. According to a synopsis, the plot will see the hero at "the dangerous intersection of humankind’s two most enduring questions" searching for "the earth-shaking discovery that will answer them." Any bets on the two questions? "What's the wifi password?" has to be one of them.

There's a possibility that an Origins movie may not be far behind the novel. But Hanks clarified in the same Cinema Blend interview that neither he nor the studio are contractually obligated to adapt a certain number of these books. "We have no idea if it's going to come down the pike — if we're going to want to jump on it or not," Hanks said. "We'll see."

Inferno will be in theaters Oct. 28.