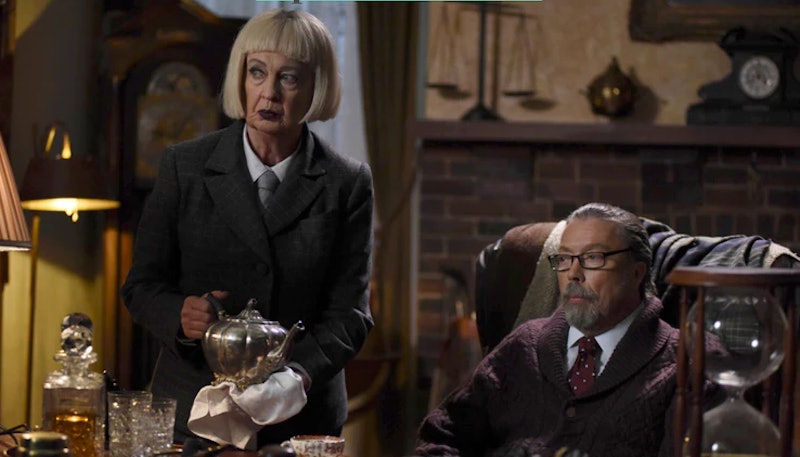 Although, The Rocky Horror Picture Show came out in 1975, it feels as though it never left theaters and has remained fresh for every generation that encounters it. It feels that way, because it’s true. The “longest-running” theatrical release moniker is well associated with the ahead-of-its-time horror musical comedy. And, FOX decided to bring Rocky Horror into 2016 in a new way with their remake which aired Oct. 20. But, just because the film has been modernized doesn't mean there weren't plenty of easter eggs and references to the original Rocky Horror movie.

While there is a new cast, new set, new costumes, and new fans that will be exposed to the story through the wonder of television, appropriate for the voyeuristic story, there are some staples that remain throughout the TV movie — it definitely errs more toward remake than reboot. And, there are plenty of nods to the original film and cast with easter eggs hidden throughout Fox’s Rocky Horror Picture Show. Fans should watch the new Rocky Horror with a careful eye to catch all of the allusions to the 1975 film, but, in case you missed any, I did my best to compile a full list. Here are all of the nods to the 41-year-old The Rocky Horror Picture Show in the 2016 film.

Tim Curry As The Criminologist

The original Dr. Frank-N-Furter, Tim Curry, also stars in the remake as The Criminologist, An Expert.

Theater Ads Before The Movie

Remember the dancing popcorn of yesteryear? This Rocky Horror film mimics the theatrical screenings of the movie. The intro is sung in a theater with signs on the screen that are nods to the film and music to come later. For example, there is an ad explaining that the concession stand is “just a jump to the left.”

The Honeymoon Joke On The Car

The car leaving the wedding has some lame joke scribbled on it, something like we said I do and now we’re doing it. But, the original film had this written on the car, "She got hers, now he'll get his." The upgrade is much better, in this case, at least.

In the graveyard after the wedding, Brad and Janet dance around Mary Shelley’s grave. Mary Shelley is of course the author of Frankenstein. “There is a light” is also inscribed on the epitaph.

Brad’s line, “We'll play along for now and pull out the aces when the time is right,” is accompanied in the remake with actual ace cards falling out of his trousers.

Rainbow Lights In The Lab

In this version of Rocky Horror, Rocky is not suspended in water. So, no rainbow drops are sprinkled into his aquarium. However, rainbow lights shine bright throughout the lab.

Rocky Does A Turn

Though there is no gauze to unwind in this rendition of “Sword of Damocles,” Rocky still does the spin as part of the choreography.

Columbia has lips on the back of her jacket and on her pajamas that are reminiscent of the iconic lips from the original film’s opening credits. She also wears the same Mickey Mouse/matador hat as Columbia did 40 some years ago. I also tried to make out the heart tattoo on her arm, I really hope it models Tim Curry’s tattoo in the 1975 film and has the word “boss” attached to it. But, I honestly didn’t get a good look.

Eddie, played by Adam Lambert, has the same Love, Hate tattoos on his knuckles that the character had in the original film.

When the group sits down to a tense, and tender, dinner, Columbia says, “I hope it’s not Meat Loaf again.” That is reference to the 1975 film when Meat Loaf played Eddie and was served as the meal during this dinner scene.

Did you catch any of your own? It's always nice to see a remake nod to the original and FOX's Rocky Horror did that in spades, or... should I say, aces?