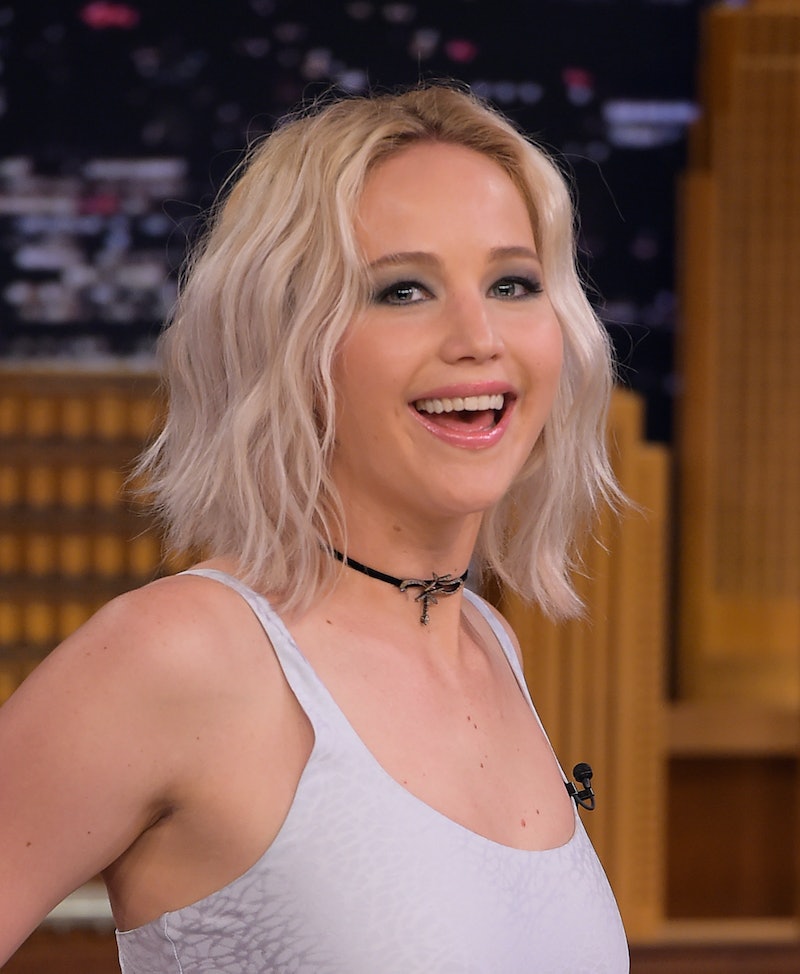 Has Jennifer Lawrence found love with Black Swan director Darren Aronofsky? According to People, a source close to Lawrence says the Oscar-winning actress and the experimental director allegedly have been "hanging out and are casually dating." Which could be a fun way to say "are working on a film together and therefore have been romantically linked," because it looks like Lawrence met Aronofsky on the set of — you guessed it — a film. A film that has yet to procure a title, but that stars other big names like Ed Harris, Javier Bardem, and Domhnall Gleeson.

Back in October of 2015, Variety reported that following the end of The Hunger Games, Lawrence would be working on an Aronofsky project. Since then, not much has been said about the project-that-doesn't-have-a-title, but some enigmatic plot details have emerged on its IMDb page. It's listed as a movie that "Centers on a couple whose relationship is tested when uninvited guests arrive at their home, disrupting their tranquil existence." Sounds vague, but I guess not any less vague than a ballerina on the brink of insanity, or four people from Coney Island struggling with addiction (Requiem For a Dream). In other words, it's on par with Aronofsky's usual work.

As for this pairing seeming a bit random, well, it is and it isn't, I guess, if you consider what the actress told Harper's Bazaar in April. When asked whether or not she had a type, Lawrence said, "I don't think so, because patterns are the work of the devil. If I think about all of my ex-boyfriends, they are all so uncomparable." Lawrence hasn't been in a high profile relationship since she dated Coldplay singer, Chris Martin. Before that, she was in an on and off relationship with her X-Men co-star, Nicholas Hoult. If you put Aronofsky, Martin, and Hoult in a room, you'd have to agree with Lawrence: All three are pretty incomparable.

Taking that into consideration, this move seems to fall in line with what we know about the charismatic and sometimes surprising Lawrence. Sure, there's nothing about being rumored to be dating Aronofsky that's relatable, but it's definitely unexpected.