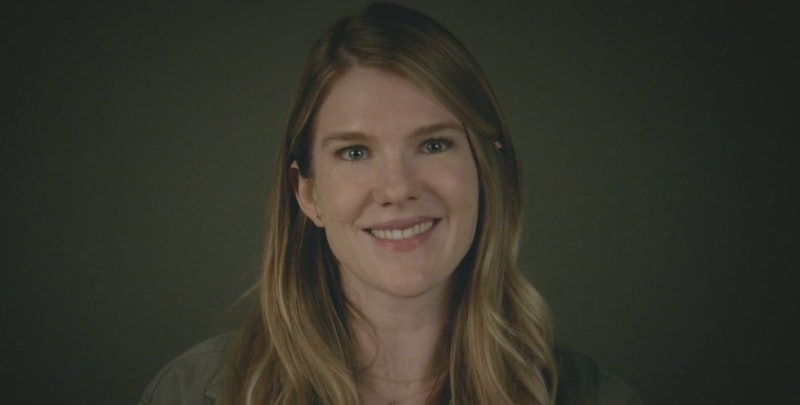 That big Episode 6 twist in American Horror Story: Roanoke delivered in a big way. After five episodes of Shelby and Matt's My Roanoke Nightmare, Episode 6 jumped into the future to reveal the producers were making a sequel that would trap all the actors and their real counterparts in the haunted North Carolina house just in time for the Blood Moon. The real twist came in the final seconds when a title card declared only one person would make it out of the house alive, and you guys, American Horror Story: Roanoke 's sole survivor has to be Shelby.

I know Shelby spent a lot of time running through the woods screaming "Matt!" during her first stint in North Carolina, but horror movie logic and a few hidden clues, suggest Shelby is the Final Girl. Just in case you are not familiar with the concept, the final girl is the female protagonist of a horror movie who makes it out alive. Sometimes she is virginal, but with horror movies becoming more progressive (read: less grossly sexist), final girls are less likely to be punished for sexual transgressions — like the affair Shelby had with the fake Matt, Dominic. Shelby's status as a final girl in training, as well as a few hints from AHS mastermind Ryan Murphy has weaved throughout the story, point toward Shelby living to tell the tale of her second Roanoke nightmare.

Here are all the reasons why Shelby has the best chance of surviving Roanoke a second time.

She Knows The Drill

Shelby, Matt, and little Flora (who thankfully does not appear to be joining the crew at the house of horrors) are the only people who survived the Blood Moon period when the dead walks among the living. The first time around Shelby was not exactly a fierce warrior woman, but she held her own through hauntings, being kidnapped by hill folk, and nearly losing her foot. That has to give her at least a little bit of an edge over her housemates.

The only reason Shelby returned to the house at all was for Matt's sake, and when it comes time to fight back against The Butcher and her army of the dead, I would not be surprised if Shelby channels her inner Ripley. After a character survives the first entry in a horror franchise they tend to be way less damsel and more hero in the sequel. Shelby is far from perfect, but that does not mean she isn't the hero of the story.

There Is A Strong Coven Connection Coming

In a post-Episode 6 interview with Entertainment Weekly, Ryan Murphy revealed AHS: Roanoke would have connections with AHS: Coven . In the interview, Murphy confirmed Lady Gaga's Scathach is the original Supreme, but promised the connections to Coven would go beyond Scathach. Remember, Shelby was already interested in new age pursuits, after everything she witnessed would she really go back into the house unprepared?

I would not be surprised to discover Shelby did some major digging into the occult and discovered some witchy powers all her own. She may even have contacted someone from the New Orleans coven — Cricket did leave a major breadcrumb when he revealed he hailed from New Orleans, after all. Shelby agreed to go back for Matt, but I have a feeling there is more to her story.

She Is A Woman On A Mission

The combination of the house and My Roanoke Nightmare completely destroyed Shelby's marriage, and she wants her life back. In Episode 6, only three people treated the return to the house with any sort of gravity: Shelby, Matt, and Lee. Of those three, Shelby is the character with the clearest mission. Lee wants her name cleared, and Matt presumably didn't want his sister going back alone, but Shelby is in this thing for love.

Having something as strong as a desire to reunite with the person she loves drive Shelby's motivations means she is in this situation with a clear head and a goal, something none of the other characters can claim.

A clever writer over at HelloGiggles noticed Shelby is now wearing three charm necklaces. Previously, Shelby was never seen without her "M" and "S" charms — for Matt and Shelby — and now she has added a third necklace to her collection. Even though the letter is hard to make out, it has led to speculation Shelby and Matt (or hey, maybe even Shelby and Dominic) had a baby between Roanoke installments. If they did, then Shelby has even more of a reason to fight for her survival above all else.

AHS prides itself on being unpredictable, but right now all signs point to Shelby having the best chance of surviving another round of Roanoke nightmares.