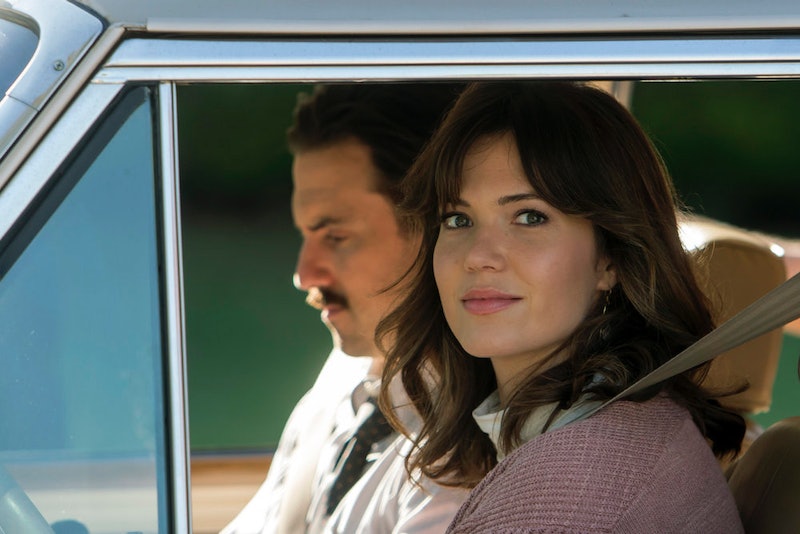 It's always interesting to see parents before they were parents. However, it can be a little hard to swallow, sometimes, knowing that your parents were people before you were born. Take, for instance, This Is Us. Jack and Rebecca were once a happily married couple who were obsessed with the Pittsburgh Steelers (luckily, this tradition continued after there were little ones) and didn't have three kids to worry about. They had friends and nights out at the local bar and dreams of their own. Interestingly enough, Rebecca wanted to be a singer on This Is Us and right before she became pregnant with the triplets, she was going through a little bit of a career crisis.

Am I shocked that Rebecca’s choice of career on the show involved music? Uh, no. Not at all. Mandy Moore sings in many of her acting projects, because it would be a waste to have a talented singer-songwriter like Moore on your show and not put all of her talents to good use. Though the Oct. 25 episode was the first time we saw her sing on This Is Us as Rebecca performed the national anthem at a bar, I doubt it will be the last. Unfortunately, it seems that Rebecca’s career trajectory hasn’t been as successful as Moore’s in real life.

For Rebecca, it’s 1980, she’s 29, the Pittsburgh Steelers (her favorite) are about to win the Super Bowl, and she is still just singing at the local bar, Froggy’s. Rebecca’s life isn’t bad, but she thought she’d be further along in her career by now, and she tells Jack as much when he is insistent that they start talking about having kids. Jack never wanted them before, he says, but now he does because he wants to have them with Rebecca.

Rebecca, though, wrote kids off in her equation because she never wanted to be her mother. Viewers saw a brief glimpse into Rebecca’s childhood — her father, staring at the television, her mother doting on him as he ignored her but to ask for more beer, and Rebecca and her sister shooed away so daddy could watch the game. Rebecca said that she never wanted that for her life, so Jack should have married someone else who only wanted to play mommy if that’s what he wanted.

We learn later in the episode that Kate and Kevin were conceived the same night that the Steelers won the Super Bowl (in the bathroom at Froggy’s, natch), but I wonder, if Rebecca and Jack weren’t so caught up in the frenzy of their love and the big win for Pittsburgh, would they still have had children? Though Rebecca admits to Jack that when she imagines their future, she sees them with kids, she also seemed very insistent about trying to blaze her own path. Had she had a little more time to think about things, perhaps she would have taken another year or two to try and get her singing career off the ground before starting a family. Then again, she could have realized that singing was a pipe dream, and decided to start trying to conceive anyway.

Regardless of what went into her decision to have kids after all, I really want to know what else happened with her singing career, both before she got pregnant and after the kids were born. We don't know much about her life outside the kids once they were born, and though she's clearly talented, that doesn't necessarily mean she found success.

With this storyline, This Is Us brings up how the expectations that we all have for our own lives don't always match reality — Rebecca and Jack never thought they’d have triplets, but here they are. Kevin didn’t think he’d end up in New York, but now he’s in a play. Randall didn’t think he’d want to get to know with his birth father, but William is a happy part of his home. Kate didn’t think she’d find a man like Toby, but he’s making her jicama sticks in the kitchen. Sometimes things don’t go as planned, but they turn out pretty good anyway, and though Rebecca clearly loves her children and being a mom after all, I'm eager to see whether her career expectations were met too.