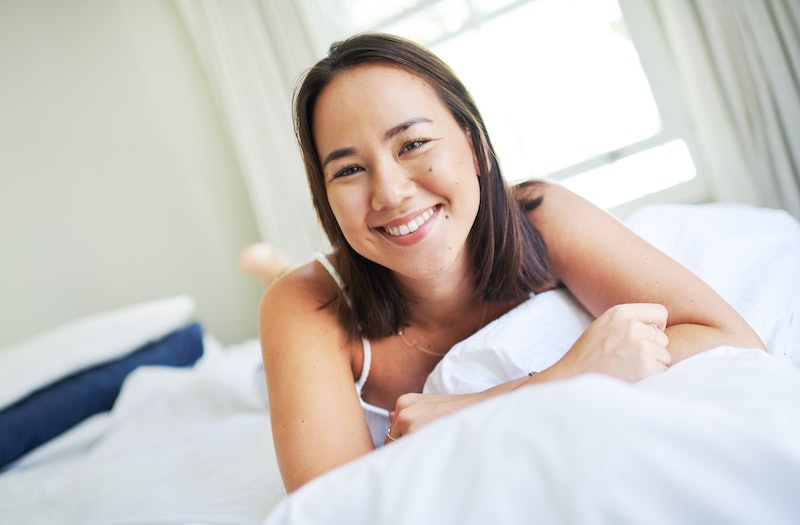 Certain sexist stereotypes suggest that as your your sex number increases, your happiness and self-worth decreases. This only applies to women who sleep with men of course, because guys who boast partner counts in the thousands are held up as gods of game instead of used up "sluts." Contrary to these sex-negative attitudes, however, are multiple studies that say it isn't all so black and white.

Thanks to the tireless efforts of sex-positive feminists, there is more public awareness about sexual double standards. In fact, even President Obama brought the subject up earlier this year, saying: "We need to change the attitude that punishes women for their sexuality, but gives men a pat on the back for theirs.” In this mic drop moment, he became the most high profile man in history to tackle slut-shaming as a serious issue. A woman's perceived or actual sexual activity should have no bearing on her worth as a human being. However, it still might impact her happiness and how her peers interact with her.

According to research by the Utah Department of Family and Consumer Studies, women in the 1980s and 1990s who had sex with exactly two people before marriage (including their husbands), were more likely to get divorced than women who had more partners before marriage. Something about having only one other person to compare your husband to might have something to do with it, the study authors hypothesized.

In a 2013 study published in the Journal of Social and Personal Relationships, women were asked to document their feelings about a hypothetical woman who either had two partners or 20. The female subjects rated the woman with more partners as "less competent, emotionally stable, warm, and dominant," suggesting that internalized misogyny is real, and slut-shaming remains an issue between women.

Given how differently people approach their sex lives, the idea that a number of sexual partners could be "ideal" seems a bit absurd. Nevertheless, a survey by the dating site Illicit Encounters of 1,000 British adults revealed that 10 was perceived as the perfect number of partners to have when looking for a mate.

A study by Chapman University of over 60,000 adults concluded that a woman's BMI has little discernible correlation with the number of sexual partners she has had. Despite the damaging societal pressures women face to be thin in order to be perceived as sexy, women of all sizes are getting busy at the same rate. Researchers did note that underweight women had slightly fewer partners, and suggested that this was because being underweight is often accompanied by other health problems.

5. Millennials Have Fewer Sex Partners Than Their Parents