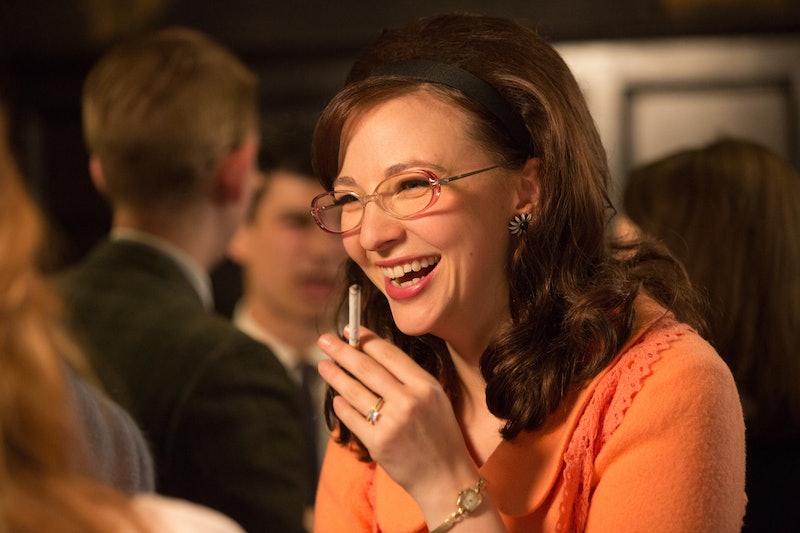 Women used to not be able to write for Newsweek, but that changed when 46 female employees filed a lawsuit against the publication for gender discrimination in 1970. Amazon's new series Good Girls Revolts tells the story of this lawsuit, but puts its own spin on it with the show being set at the fictional News of the Week and using fictional characters. Bustle reached out to Newsweek for comment on the original lawsuit and the show portraying it now, but has not yet heard back. The lawsuit resulted in a settlement in which Newsweek agreed to provide equal employment opportunities to women. But, the fictional take on the story allows Good Girls Revolt to take a few liberties when it comes to the personal lives of the women involved in the lawsuit, including Erin Darke's character on the series, Cindy whose sexual liberation is at the forefront of her character development. Spoilers for Episodes 1-3 ahead.

Beyond the characters' professional lives being impacted by their pursuit of gender equality in the workplace in the late '60s and early '70s, the women on Good Girls Revolt see major changes in their personal lives as well. The character who seems to change the most is Darke's Cindy. The modest News of the Week researcher who prefers to hide away in the photo department rather than work at her desk in the busy pit has a sexual awakening within the first few episodes. And, though the actress who portrays her admits to not necessarily being anything like Cindy, Darke says in a phone interview with Bustle that she understood her right away.

"Cindy is very different from me as a person," Darke says. Yet, she was able to look past that to connect to her. "When I imagined if I had been raised in that time and by parents who hadn't told me that I could pursue my dreams and do whatever I wanted and that I had the same opportunities as everyone else, I feel like she's this alternate universe version of who I could have been," Darke says.

In the series, Cindy is already married and her husband Lenny wants to start a family and is allowing his wife to work only for a year to gather stories for her novel. Once they start a family, Cindy would be expected to leave her beloved job at News of the Week forever. Through Grace Gummer's Nora Ephron observing in the season premiere that Cindy could continue to write and that Lenny may be sabotaging her reproductive freedom, Cindy realizes that she can pursue her dream profession and that maybe she doesn't need to remain unsatisfied in her unhappy marriage. After a sexual encounter with a male coworker in the photo room, Cindy has a moment of self-discovery in a masturbation scene in the third episode.

"Filming those scenes is always uncomfortable. If you were a person who doesn’t find that uncomfortable, then more power to you, but I am not one of them," Darke says with a laugh. However, the awkwardness of the sexually-charged scenes was alleviated a bit by the supportive actors she was working with. She also thought portraying these intimate moments was important not only to Cindy's story, but for women in general.

While many modern women can credit Sex and the City for helping them overcome the stigma surrounding a liberal attitude toward sex, the characters on Good Girls Revolt had no Samantha Jones to look to for inspiration. "The thing is, female sexuality should be this beautiful thing and taking ownership of it is something that I think we, as women, still sometimes struggle with," Darke says. "Like I can't imagine what it was like in 1970." And, though women have made significant strides in how we are perceived sexually, Darke thinks that Cindy on Good Girls Revolt is still an applicable example of sexual empowerment and feminism.

"Being a woman, even in today's world, growing up, I struggled with trying to figure out what is owning my own sexuality as a woman, and what is 'being a slut,'" Darks says. "That is something that I still think women deal with and I know that I did. And I think it is so important to watch a woman and see a woman realize for the first time that it is OK for her to feel pleasure and to own that and to have that as something that is powerful for her — not just something that you are doing for a man."

Because this idea of sexual inequality still plagues women in 2016, modern women may still be able to relate to Cindy like Darke mentions, even though her character's experiences take place in the late 1960s. "There's something about this person who you can feel there's so much in her just trying to get out," Darke says. "There's something that I find so powerful about that."

While Cindy Reston will certainly be relatable to some viewers, as previously mentioned, she wasn't a real woman from history who worked at Newsweek back in 1970 during the lawsuit. Darke sees that as a positive aspect of the show for herself and her fellow actors, like Genevieve Angelson and Anna Camp, and also for the women who actually were a part of this gender equality movement.

"All of our characters are sort of inspired by, and amalgamations of sort of several of the women in the actual lawsuit. None of us, Genevieve, Anna, and I, are specifically based on one person. I think for a couple reasons. Both that it gives us, the show, a lot more license in dramatic storytelling ... [and] when you are portraying one specific person from history, you have such a responsibility to represent them accurately," Darke says. "I hope that the way we're doing it, this way the women who actually lived through this, like these actual women of the Newsweek lawsuit, can watch the show and be like, 'Yes, that is the spirit of what we did, but I don't have to feel uncomfortable in knowing that you are me.'"

So, while Cindy's sexual awakening isn't necessary a true story, Good Girls Revolt is using the freedom of a fictional character to highlight a female experience that is reflective of the time the series is set in — without putting a real woman's sexual history on display. And, as Cindy becomes more empowered in the workplace, here's hoping Darke's character will continue to do the same in the bedroom (and the photo room) and inspire other women of any generation to embrace their sexuality too.

More like this
It’s Official: 'The Bachelorette' Is No Longer A Fairy Tale
By Samantha Allen
Watch The Trailer For Netflix’s Edgy New Comedy 'FAKES'
By Brad Witter
Here’s The True Story Behind 'A League Of Their Own'
By Morgan Leigh Davies
Does 'Locke & Key’s Ending Mean There Could Be A Season 4?
By Sophia Moore
Get Even More From Bustle — Sign Up For The Newsletter