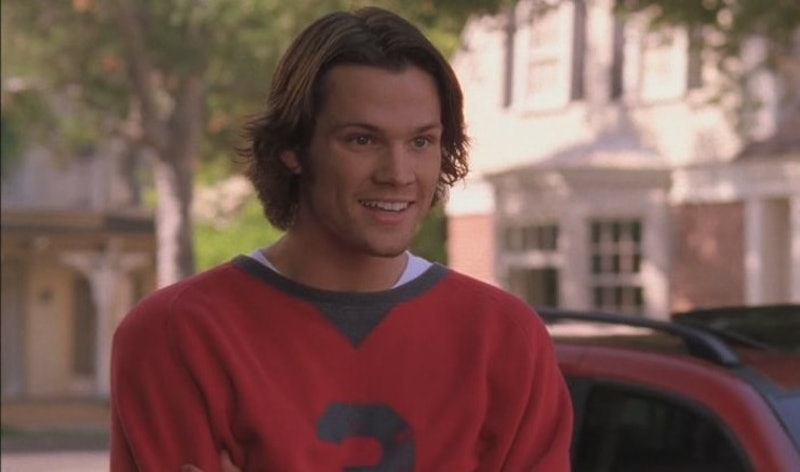 Although I've now watched it approximately 100 times, the latest trailer for the Netflix revival of Gilmore Girls is full of clues. In fact, I'm not sure I actually caught them all yet. One major question I have, though, involves Dean. What exactly is Dean doing in Gilmore Girls: A Year in the Life ? The trailer made a very blatant point to illustrate that Rory is adrift in her life. Lorelai even quips about her having a Jack Kerouac-esque lifestyle. It's also pretty evident that part of Rory's journey to find out who she truly is and where she belongs will involve revisiting the three biggest relationships in her life: Dean, Jess, and Logan. Amidst the revival production rumors, a veritable cottage industry has sprung up around who Rory actually ends up with. Dean's appearance in the trailer could actually confirm a fan theory and, in the process, confirm who Rory actually ends up with.

If you ship Rory and Dean, then you may have been screaming at your computer screen when you saw that he only merited two seconds worth of screen time, compared to Jess's meatier three seconds. I know, I'm mincing time here, but stay with me. This is important. Even though viewers get a glimpse of Dean oh-so-briefly, this can actually reveal a lot about what is happening.

First off, he's in Doose's Market. This was the location of Dean's high school job, the first one he had after moving to Stars Hollow. He's also seen exiting Doose's and the town seems rather quiet outside. (Where is everyone?) Viewers don't know who he's looking at, although he has a rather all-knowing look, right? All things considered, I'm wondering if the "Rory's exes appear in a dream sequence" fan theory could actually be true and may only involve Dean. This idea is further aided by the fact that Jared Padalecki was only on set for one day and that creator Amy Sherman-Palladino had gotten him on board with a really interesting sequence (like a dream sequence, perhaps?). What if Rory is actually daydreaming about the life she could have lived if she had stayed with Dean and put her own ambitions on hold? It would certainly fit with her aimless narrative in A Year in the Life.

Interestingly, one fan on Twitter spotted a detail so small yet so crucial, I'm actually kicking myself for not having noticed it, too. It's the advertisement for cornstarch, folks. In the bottom right corner of the Dean's scene, on Doose's window, is the cornstarch notice.

That small detail could actually tear apart the dream theory. How? It would be weird that Rory's dream would be that detail-oriented. Instead, it recalls one of Rory's first big exchanges with Dean that led to their first kiss in — you guessed it — Doose's. The existence of a sign that is so weighted in Dean and Rory's romantic history adds a certain kind of reality that could mean Dean's time onscreen would simply involve him running into Rory once she has returned from Stars Hollow. A simple "bumping into one another" can be filmed in one day, too, right?

Dean has always been unattainable for Rory. Not because they were too good for each other, but rather, they have always been on different paths in life. Even at the beginning of Gilmore Girls when Rory spoke of going to Chilton, then Harvard, and then traveling the world, Dean didn't know if he even wanted to go to college. It was one of the many differences that soon pulled them apart. This makes me believe he won't be the one Rory winds up with in the end.

Alright, I think that's all I can safely conjecture about Dean's involvement before the fan theory train goes on the tracks. Is Dean destined to stay in Rory's dreams? Just wait and see.

More like this
This 'Gossip Girl' Wardrobe Error Has Gone Viral On TikTok
By Alyssa Lapid
'Friends' Star Maggie Wheeler Offers Support To Matthew Perry After Reading His Memoir
By Alyssa Lapid
Hilary Duff Is “Optimistic” About A 'Lizzie McGuire' Reboot
By Alyssa Lapid
Mel B Thinks These Celebs Should Play Them In A Spice Girls Movie
By Alyssa Lapid
Get Even More From Bustle — Sign Up For The Newsletter
From hair trends to relationship advice, our daily newsletter has everything you need to sound like a person who’s on TikTok, even if you aren’t.