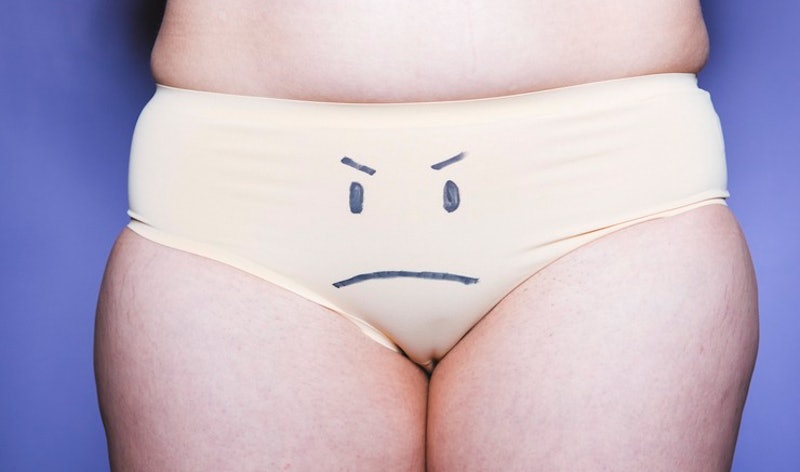 Years ago, I slipped my carefully-coiffed groin area into a warm bath and opened Caitlin Moran’s How To Be a Woman . Widely hailed as both the British Tina Fey and a young Gloria Steinem, Moran had this to say about pubic hair: “[A] grown, modern woman should have … a lovely furry moof that looks — when she sits, naked — as if she has a marmoset sitting in her lap.” I glanced down at my lovely Brazilian and thought, ew.

And, no, thank you, I did not want to use the creepy-sounding word “vagina,” nor was I crazy about sexual harassment lawsuits. Can't a guy tell a joke anymore? Not if you let the feminazis run things, I thought. Take your burning bras and saggy boobs back to Oberlin and leave the rest of us alone.

My minimalist pubic hairstyle all started in my last year of college, when I moved up the street from the sweetest little sex shop in Oakland, California. The shop was quite tasteful: pastel fabrics draped along the walls, everything spotless and well-organized. I went in with a few girlfriends as a joke. We snuck exaggeratedly wide-eyed glances at one another and trembled with suppressed giggles as we rented a movie. The trip earned the highest compliment we tossed around in those days: “It was crazy!”

Then one day when I went to get my eyebrows done, I decided on a whim to have the ground floor cleaned up as well. My boyfriend loved my new bareness, and the whole process — first the outlay of time, money, and pain tolerance, then ingrown hairs — didn’t bother me all that much.

I dutifully climbed onto my hands and knees, the esthetician’s white paper crinkling beneath them, so as not to disappoint the male doctor at my third child’s birth.

In law school, something about my lack of feminism started to itch, so to speak. “You know,” my friend threw out all nonchalance as we ran along New York’s East River bike path, “people think you talk too much in class. They find it annoying and, I don’t know, pushy.” I’d suspected others saw me as “a gunner,” someone shooting their hand in the air in hopes of a corresponding rise in grades. But obnoxious? Really? I took the criticism to heart and began sitting in the rear of the classroom so I could ensure I only spoke when no one else wanted to.

After just a few days, my Property Law professor asked me to come by her office. I explained why my new modus operandi was for the best. “Don’t you see what’s going on here?” she asked. “You’re pretty much the only woman in my class who speaks her mind like the men do,” she declared. Seeing the skepticism on my scrunched up face, she pleaded, “Just listen for it.”

Sure enough, other female students often qualified and dissembled: “Correct me if I’m wrong, but could Justice Brennan possibly have been trying to say...” The top men in our class, however, interjected their opinions frequently and forcefully — and they were admired for it.

Symbols carry power, and I now see the value in a naturally fierce mound — a Hill, if you will.

Still, I was no feminist. I mean, the things those broads come up with! Everything becomes offensive. But then I worked at a law firm in Boston. I did good work, and I knew it. Yet my first review criticized me for being too demanding of support staff. The male partners regularly threw mantrums over typos and filing hiccups. I dropped my work off with a “please” and picked it up with a “thank you,” but everyone knew I too expected first-rate work product. I couldn’t help it; I’d been spoiled by a fantastic legal secretary at my clerkship the year before. Once again, the word “bitch” floated on the air, and I breathed it in, vowing to soften.

When I got pregnant the following year, I received a lovely gift basket from the firm with delicate pink gifts for my unborn daughter. I thought nothing of it, but then I had a son two years later. I saw no differences in my kids’ activity levels and interests, but plenty in the way others treated them. “Be careful,” people would shout as my daughter climbed — but when my boy scaled the same structure at the same age he heard only "look at you go!" “We do not hit,” they chided her when she roughhoused — but his elbow throwing merely elicited fond smiles and “he’s such a boy.” Her aggression was cabined and tamped down; his tolerated, even fostered.

Though still doubtful of feminism generally and women like the writer Peggy Orenstein in particular, I wanted to know more about “princess culture” and other ways adult conceptions of gender might be impacting my kids. I read and liked Cinderella Ate My Daughter , and started following Orenstein on Twitter.

Introducing an article on the health risks of genital grooming, Orenstein wrote: “Removing [your] pubic hair isn't like shaving your legs. It's like shaving your eyebrows. Don't shave your eyebrows.” More digging turned up her article "Our Barbie Vaginas, Ourselves" and a different Times piece declaring a full bush a “growing trend” for celebrities and civilians alike, “the fuller look creeping back”— in part, in order to emphasize a woman’s control over her own body, which should be perfectly acceptable au natural.

And yet, I dutifully climbed onto my hands and knees, the esthetician’s white paper crinkling beneath them, so as not to disappoint the male doctor at my third child’s birth.

Which brings me to an evening before the primaries, when I stood in a neighbor’s living room holding a glass of wine and trying to explain why I disliked Hillary so much. Yes, she’s more of a centrist than I’d like, and too much of a hawk on foreign policy — but that didn’t stop me from supporting Obama. “She’s just, cold,” I told the dinner party guests, “sometimes smug and, I don’t know, power-hungry."

My host gave me the oddest look, somehow both confused and amused: “She’s like you,” he said, “she’s smart, ambitious, and has no patience for bullshit.” I couldn’t sleep that night, and sometime before sunrise, at 35-years-old, I became a feminist. That day, I chose to give Hillary my vote — and my Brazilian.

Because it turns out the more you say “vagina,” the prettier it sounds. Because sex jokes aren’t funny when told in a context that condones sexual coercion. Because it’s time for women — especially assertive ones like me and my daughter — not to have to soften and smooth ourselves to be favorably reviewed by lovers and peers, coworkers and constituents.

Moran calls pubic hair a “politically charged arena,” a “palm-sized triangle ... top-loaded with more psychosexual inference than marital status and income combined.” Symbols carry power, and I now see the value in a naturally fierce mound — a Hill, if you will.

More like this
Wimbledon Alters All-White Kit Rule Amid Candid Period Discussions
By Catharina Cheung and Rachel Mantock
Iran Has Issued A Death Sentence Over Mahsa Amini Protests
By Catharina Cheung, Darshita Goyal and Maxine Harrison
10 Thanksgiving Alternatives You Can Celebrate This Month
By Katie Mitchell
13 Nail Art Ideas Inspired By Every Song On Taylor Swift's 'Midnights'
By Olivia Rose Ferreiro
Get Even More From Bustle — Sign Up For The Newsletter