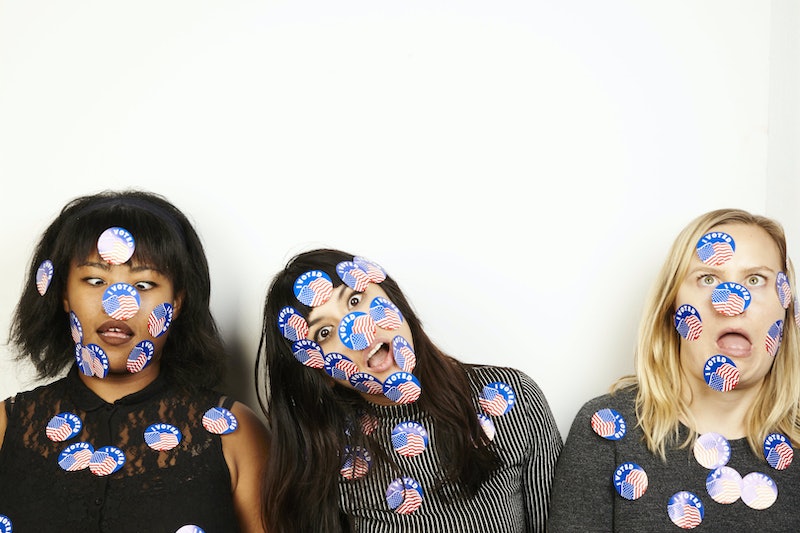 It was nearly 150 years into our country's history before women were granted the right to vote (and that was after a 70-year-long fight for suffrage). Women have had the right for less than 100 years. That's a common reason why women say they're voting in 2016 — though considering the political climate this election season has suffered through, it's certainly not the only one.

Although the women who fought for our right to vote might never have imagined a woman running for president — honestly, they probably never imagined a candidate like the Republican nominee, either — they laid the groundwork for women to have a say in elections.

Whether they're voting for a cause they deeply believe in, voting to ensure their voice is heard, or voting to make a difference in society, these 30 women — and millions more — are voting this Nov. 8, come hell or high water.

"I'm finally old enough to vote, and it is a privilege that many people around the world don't have. I'm voting because I CAN!"

"To honor the legacy of everyone who fought to give me this right."

"I'm voting because my civil rights as a young woman of color are still up for debate. In 2016."

"I'm a felon that can vote. I've been helping people register all last month because they didn't know felons can vote. A judge told me that felons and people from different walks of life need more than other to people to collaborate with our government because we have interests and experiences that no one else has. I vote because I feel like women are silenced enough and the only person who can ensure my voice is heard is me. If they can't handle the shouting, then maybe they shouldn't have created an environment where silence is expected."

"To put our suffrage to work. Even if the system is broken, we have to try."

"To make a difference and exercise a right that women fought for."

"Because I'm old now and know it's important to be involved. Our choices create our society."

"I'm voting because I can't imagine not voting and not letting my voice be heard. It's a privilege to be able to have a say in who gets to run our country, and I'd never take opportunity that for granted — especially in an election that matters as much as this one."

"I am grateful to be a United States citizen. Women have long had to fight for many rights and voting is just one of them. Voting is not just a right, it is also a privilege. Every eligible person should be participating."

"I'm voting because Black women have been fearless at the forefront of each socio-political and progressive movement in America. In order for our voices to be heard, we must demand a seat at the table."

"I voted because as a single mom of two, I have an obligation to my family to vote to assure we have a positive future and access to programs that sustain us."

"Because contrary to popular belief, we're not just electing a president this year."

"When we were small, my sister and I used to play this movie and march around the living room singing along with this song. I realize it's about the British women's suffragette movement, but it was certainly my first introduction to the fact that women weren't allowed to vote at one time (not even 100 years ago in our country). I knew then that I would always vote when I turned 18. 'Our daughters daughters will adore us/And they'll sing in grateful chorus/Well done, sister suffragette.'"

"I'm voting for a number of reasons: 1. Because thousands of women fought for over 100 years to gain women voting rights in the US, and I owe it to them 2. Because I care about the policies my government makes that affect me, and I owe it to myself 3. Because it is not just a right, but a privilege not all people in this world (or even in this country) are allowed to exercise and 4. Because most of my students aren't old enough to vote, and I want to make sure that someone is looking out for their interests, so I owe it to them."

"First and foremost, I am voting because it is our duty as American citizens to exercise this right. That said, I always vote in all local, state and national elections no matter what the issues or who candidates are on the ballot. Of course, this election year carries an immense weight, and I cast my vote with that in mind because I want to see Americans make a collective statement to stand up for what is right, fair and true in our nation's values of freedom and equality. I also vote to actively take part in making history when we as a nation elect Hillary Rodham Clinton as the first female President of the United States! #ImWithHer"

"I vote because I can. As an expat, I have lived in places where people did not have the opportunity to vote for their nation's leader and in places where it was mandatory to vote. From living overseas, I have learned more clearly what it means to be an American, and I value my freedom and the rights that I have as an American citizen. I think everyone should vote and their collective voice be heard. As a woman, I think it is our obligation to continue to vote as it is a right that we have not had for a very long time, and we need to ensure that women's input is part of the collective voice that shapes our country's future for generations to follow."

"I'm voting (well, voted already) because I see up close and personal how the people in Washington both do make a difference and don't make enough of a difference."

"I'm voting because the moment you stop thinking one person can help make a difference, you stop believing that you matter."

"The reason why I voted is because my vote represents my voice. I use my voice to make decisions that will shape my future in the way that is beneficial for me as a woman, a person of color and a human being."

"Voting is a privilege granted by citizenship. I am glad to go to the polls, exercise my privilege to vote, and join as one of many to make a difference."

"I am voting because as an eating disorder survivor and mental health advocate, I want to make sure there is a candidate in the White House who would protect and expand healthcare. Also, I want a president who will advocate for women and will defend the right to our own bodies."

"Because it is so important to be involved in shaping what the next years will look like."

"I vote every election, on every level; federal, state, local. It's important that I contribute to the society I live in. This year it seems more important because a woman finally have a chance to hold the top office."

"I vote because THEY think I won't!"

"I am voting because my vote is supposed to matter. Voting is a responsibility we need to accept to preserve this privilege granted to us through our democracy."

"I'm voting this year, just as I have every election since I was allowed to in the first place. I think everyone should vote, and I'm part of everyone."

"I've never voted before, and I feel like right now is a crucial time to vote."

"This year has perplexed my feelings about my 'voting right.' Hearing conspiracies and irrational chatter has made my action feel more dutiful than ever. Will my vote make a difference? Who knows for certain. I'm still going to do what's right."

"I am voting partly because it is my civic duty that many women (and men) before me fought for, but I am also voting because who I vote for and what they stand for represent our country to other countries and even to ourselves. I am voting because who we vote to be our next president will affect: my life, my safety, my access to good and safe healthcare, the education of my future children, our environmental choices and the well-being of our economy, including social security and jobs. I want to be a part of the conversation for where our country is going, and my voice won't be heard if I don't say something. Voting is saying something."

More like this
Read Dan Levy's Heartbreaking Message After The Club Q Shooting
By Stephanie Topacio Long
Iran Has Issued A Death Sentence Over Mahsa Amini Protests
By Catharina Cheung, Darshita Goyal and Maxine Harrison
All The Muscles You Work When Doing Deadlifts
By Carolyn Steber
Amazon Just Released These Incredible Black Friday Deals & They're Selling Out Fast
By BDG Commerce
Get Even More From Bustle — Sign Up For The Newsletter