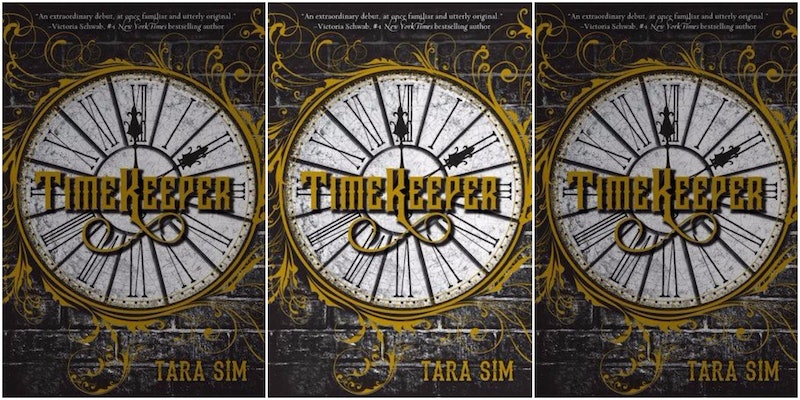 When reading YA fantasy — and I read a lot of YA fantasy — there's one thing I've really made an effort to look for in the last year: diversity. After reading a 1,001 books with pseudo-European fantasy settings where white, cisgender, heterosexual characters fall in love, I started to want more from my reading experience. Tara Sim's Timekeeper is one of the many books that fulfilled my mighty need for more diverse stories. The LGBTQ+ romance that forms the centerpiece of the steampunk novel is one of the best I've read this year, but, more than that, it had two things that are, sadly, still not a guarantee when it comes to such romances. First of all, the characters' problems had absolutely nothing to do with the fact that they weren't heterosexual. Second of all, spoiler alert, the characters had a happy ending.

Timekeeper tells the story of a young clock mechanic named Danny Hart, who lives in a version of Victorian England where clocktowers control time itself. If the clocktower breaks, whole hours can go missing or time in the town ruled by the clocktower can Stop entirely. The latter tragedy happened to Danny's father, and Danny is also suffering from PTSD due to a explosive accident that follows him to this day. When he's assigned to a clocktower in a small town called Enfield, he meets and falls in love with a clock spirit named Colton. However, relationships with clock spirits are forbidden, and a series of bombings is threatening to Stop time in even more cities across the country.

So, yeah, Danny has got a lot going on. I could wax poetically about all the virtues of this novel all day long, but I'll spare you my praise. Instead, here are the top five reasons why Timekeeper is the LGBTQ+ fantasy I've been waiting for.

I am not going to stand here and cast aspersions on novels in which the focus is on figuring out your sexuality and how it fits into your perception of yourself. Those novels are incredibly important, especially for young adults who are questioning their sexualities and want to read books that let them know that they are not alone in the questions they are asking and the issues they are facing. But I think it's equally important to present books like Timekeeper, wherein Danny's sexuality is something that he is confident in, and which does not present an issue to be overcome in his romantic relationship. He knows what he likes and who he wants, and that's just as important to read in a YA novel.

2. They Are Stronger Together Than Apart...

Listen, there are some very good reasons in this universe to not be dating clock spirits. For one thing, when a clock spirit loses control of their emotions, their clocktower goes haywire, which has some crazy effects on time in that town. Poor Enfield, you guys. Poor Enfield. And Danny does try to do the right thing here and keep his distance from Colton at first. However, ultimately, he realizes that their relationship is their strength rather than their weakness — and that other similar relationships with clock spirits in the past shouldn't be taken as a warning to avoid them entirely.

Danny may be comfortable with himself and his sexuality, but not everyone around is. Timekeeper doesn't incorporate Victorian intolerant views on homosexuality into this fantasy world, but Danny's sexuality is yet another strain on the relationship between himself and his mother Leila. Society is largely indifferent to same-sex relationships, especially in the city of London where Danny lives. However, Leila reacts to Danny coming out with a deafening silence that widens the gap between them. Not only is that unfortunately very true to life, but it's neatly woven in with the numerous issues between Danny and his mother, normalizing it as just another of the many humdrum problems they need to work through.

4. This Relationship Is Actually The Least Of Danny's Concerns

Let me tell you a little about the life of Danny Hart. His father is trapped in a Stopped town, and the giant gaping hole in his house where his father should be is having a really detrimental effect on his relationship with his mother. He's recovering from a traumatic incident that has all eyes on him as he tries to return to work without freezing up or freaking out. He's in an intense rivalry with some other young clock mechanics, chief among them the incredible, intelligent, sharp-tongued Daphne Richards. Everyone's treating him with kid gloves. Clocktowers are being bombed all over the place. At the bottom of that very long list is the fact that he enters an illegal relationship with a clocktower spirit, OK?

Guys, I'm really biased here. But Danny and Colton's relationship is so well-written that I can go from cooing over how cute they are to sobbing over what idiots they are to fanning myself over their heated, charged moments, all in the course of a few chapters. Let's just say that, if anything tries to come between these two in future books, they're going to have me to deal with.

Like I said, I read as many diverse YA fantasy novels as I can, and quite a few of those have LGBTQ+ romances in them. But Timekeeper is a triumph among all of them. If you read only one such book this year, then please let it be this one.

More like this
The Most Anticipated Books Of August 2022
By K.W. Colyard
The Best Enemies-To-Lovers Books To Read Now
By K.W. Colyard
10 Must-Read New Books Out This Week
By K.W. Colyard
I've Read The Harry Potter Books 30+ Times & This Plot Hole Haunts Me
By Kelsey Stiegman
Get Even More From Bustle — Sign Up For The Newsletter