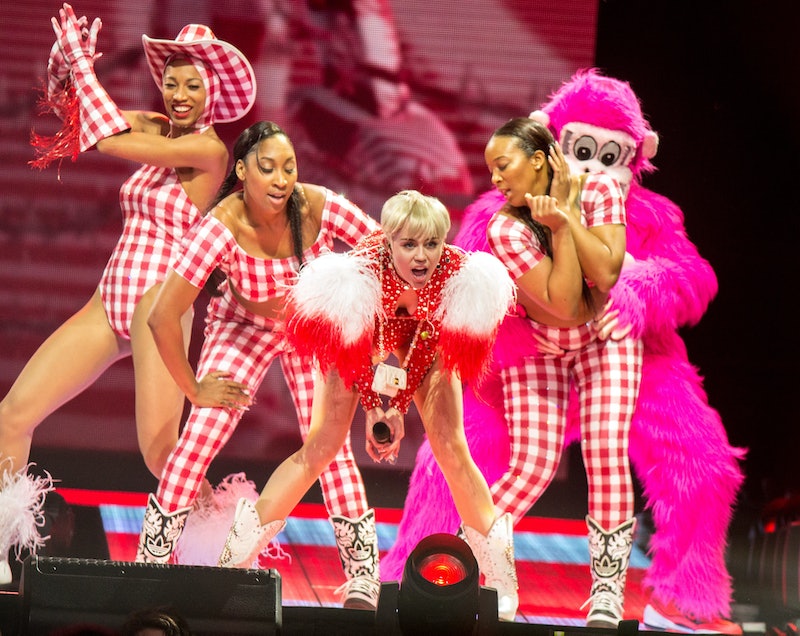 How well do you know Miley Cyrus? Well enough to ace a college class? According to Complex, Skidmore College will be offering such a course this summer. The exact name of the class is "The Sociology of Miley Cyrus: Race, Class, Gender, and Media" and according to the flyer, the class uses Cyrus as a basis for covering "transitions to adulthood", "allies and appropriation", and "gender stratification and the hyper-commodification of childhood". All right, so it's a lot less celebrity trivia and a lot more sociological analysis, but Skidmore College couldn't have picked a better subject for study.

After all, Cyrus's name is a common feature in the news for everything from posting pictures of herself rolling a joint to considering herself one of the biggest feminists in the world. If there's anything Professor Carolyn Chernoff can count on, it's that she'll have lots of recent material to discuss while the class is in session. And Cyrus isn't the only celebrity who has ever been the subject of a college class. Courses on the Beatles have been offered at many universities over the years, including one at the Skidmore College Department of Music simply called "The Beatles", and recently Beyoncé has been the subject of a women's studies course at Rutgers University.

For those of us who fooled ourselves into believing that watching Extra was an important part of doing homework, now it could make up the entire assignment. Why stop at Miley Cyrus or Beyoncé? I can think of at least four other celebrities who should get a class on them next.

The Kardashians are already an interesting study in business and marketing. After all, there are very few people that can answer the question of what they're famous for besides the reality shows they acquired for being famous. Imagine taking a marketing and public relations course filtered through the lens of the Kardashians and writing essays on how you, too, can turn your name into a brand.

West may be a polarizing figure as a person, but no one can deny that he does some amazing things with music and rhyme. A music theory course that involves a lot of lying on your back listening to West's albums one right after the other sounds reasonable, as long as it's followed by an essay on West's stylistic choices and why and how they work for each song.

Page is a current media and celebrity darling for her decision to come out of the closet, so using her as the basis for a gender and sexuality course that examines the importance of celebrities speaking up and speaking out on behalf of all the people who would otherwise be too scared to would be interesting. Knowing Page, she'd probably agree to come in as a guest speaker.

One Direction is a cultural phenomenon, no matter if most of their fans are below the legal drinking or driving age. The British-Irish band could easily be the subject of a sociological course along the same vein as the one on Lady Gaga. "One Direction and the Sociology of Fame" has a nice ring to it. Or "The Cultural Impact of Zayn Malik's Eyelashes: A Sociological Analysis of One Direction".