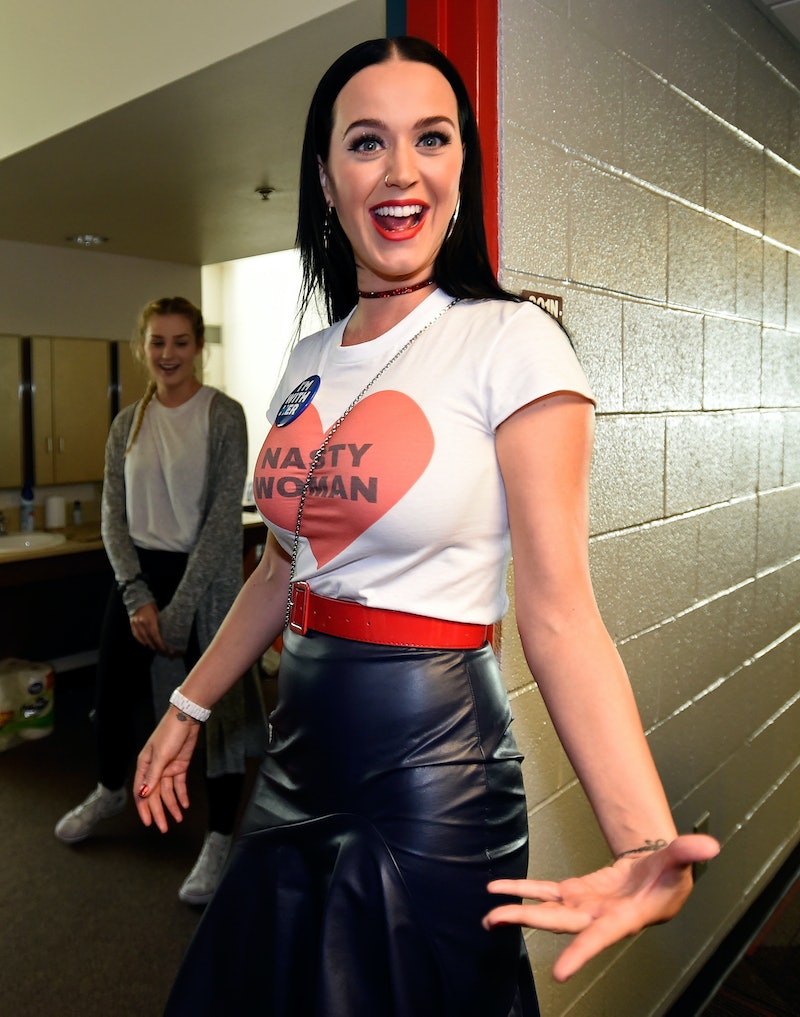 With the intensely stressful U.S. election less than two weeks away and Halloween just around the corner, it makes sense that the two events may collide in some ways. People are surely anticipating seeing a slew of horrifying, bizarre, and cheaply thrown together attempts at costumes which parody the two main presidential candidates, but there are probably also some who want to show their support with a positive, political ensemble too. And if you happen to be of the latter category, then there's something you definitely need to see — Katy Perry's Hillary Clinton costume, which takes her already strong support of the candidate to the next level.

Sharing a picture of her on-point costume via Instagram with the caption, "Having a little pre party before I take office #IMWITHME," Perry looks barely recognizable as the Democratic nominee. Wearing a set of facial prosthetics and some clever makeup, along with Clinton's now iconic red pantsuit, Perry's costume provides the perfect middle ground between the fun of Halloween and the pressing importance of the upcoming election. And I must say that Perry's laidback, delighted facial expression — combined with that fresh-looking martini — is totally making the look happen for me. See for yourself:

Perry has been an incredibly vocal supporter of the candidate throughout Clinton's entire campaign. Back in 2014, for instance, the singer offered to write Clinton's campaign theme song for her (with Clinton responding via Twitter that "Roar" already was that song), and 2016 has further seen Perry consistently sharing her support for Clinton via social media and delivering impassioned performances at her political events.

So Perry's decision to actually dress up as Clinton is the clearly the obvious next phase of her support for the candidate. It makes total sense. After all, the singer is already known for her quirky sense of humor, style, and love for grand costumes (I mean, remember Perry's Cheetos costume?). When you combine those traits with her current passion for politics, then it actually feels like a pretty obvious move. How did no one see this coming, guys?

Considering how intense and fraught the current political climate is in the lead-up to the election, Perry's costume also provides some much-needed and lighthearted relief. Whatever your political opinion is or whomever you're supporting in the election, I think everyone can agree that it pays to find time every now and then to take a deep breath and enjoy some whimsical catharsis from it all.

Perry's Clinton costume certainly makes an additional (and powerful) statement of support to her candidate of choice, but it also does it in a really fun way which I totally applaud. And seriously, I will pay good money to see video footage of Perry in that costume laying down some serious dance moves. Because that's my kind of political candidate right there.