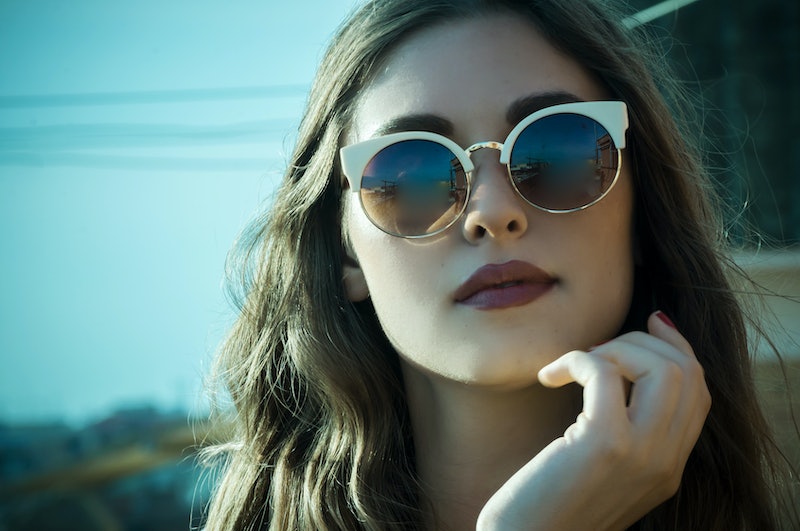 At this point, I'm used to the eye-rolls and "femi-nazi" barbs when someone asks if I'm a feminist and I respond in the affirmative. This does not bother me, because I feel confident I am on the right side of history by believing in equality. That's what feminism is, you know — the belief that all people are equal. Unfortunately, though, there are many things feminism does not mean that have somehow become woven into the fabric of modern-day feminism in Western culture.

Did you know that only 23 percent of women and 16 percent of men even subscribe to feminism? Despite the fact that a majority 82 percent of both genders say they do believe that men and women should be social, political, and economic equals. The problem is that there is that people seem to be having a hard time distinguishing between what feminism actually is and how it's perceived.

This pushback isn't new to feminism. Historically, there have been detractors at critical junctures all along: Picketers who protested women's suffrage, author Marabel Morgan's regressive yet top-selling manifesto The Total Woman in the '70s, contemporary anti-feminist groups such as the Tumblr-based blog Women Against Feminism. There's clearly a disconnect about the movement and, to be honest, it's kind of heartbreaking that the sacrifices of so many feminists to get us to this point are being marginalized and dismissed as part perceived hate rhetoric.

So let's dive in, shall we? To really get to the root of what feminism the movement means, we need to talk about what feminism doesn't mean.

Y'all, STAHP. Feminism is not a doctrine that advocates demonizing men. Feminists can — and do — have male allies and friends. Yes, there are feminists who are men. If you feel the actions of someone you assume believes in feminism are more indicative of misandry than advocacy for equality, know that is not feminism. Feminism is about equal rights for all, and it is a battle being waged by all genders.

It hurts to hear people cite this as part of the reason they reject feminism. To say people who believe in equality are "playing the victim" implies that marginalized people are not and have not been victims of a society that often invalidates the abuse and/or diminishing of their rights. Feminism is about bringing to light the injustices that have been committed against women in the name of patriarchal values in the hope they may lead to greater change — and the same is true for injustices that have been committed against people of color, people with disabilities, LGBTQ people, and so very many more. You can't "play" the victim if you actually are one.

There isn't a field guide for feminism circulating that mandates that everyone has to stop shaving their body hair. How is this something people actually believe? If it so happens you don't want to shave your body hair (because it's your body and your choice), of course feminism welcomes you with open arms — just as it does hetero women who are quote-unquote "girly" and like to get glammed up. It should be mentioned, though, that the idea of shaving as "girly" is kind of ludicrous. Who decided having hair wasn't feminine? Psh. Again, equal rights for everyone have nothing to do with how you look, what your preferences are, who you find attractive, or anything else in that vein. It's about equality.

See also: traditional values. If you are a hetero couple raising your children with traditional values, well, OK. That's cool. Contrary to seemingly popular belief, feminism does not mean bashing traditional gender roles like the stay-at-home mom or the male "provider." If anything, feminism is supportive of those roles because feminism aims to ensure everyone — regardless of gender — has access to the same fundamental rights without fear of reprimand or persecution. Naturally, this also means that feminism advocates for families who are not heteronormative. It is not about shaming or alienating anyone. Feminism is a movement built around inclusivity. It's about not being forced into any roles you don't want to have — but about having the choice to follow them or not follow them as you see fit.

A False Sense Of Entitlement

Diminishing The Focus On Equality For All

Perhaps it's the "femin-" at the front of feminism that offends people's sensibilities. Although, this is silly, no? The whole of humanity is called "mankind." America has always been defined as the land where "all men are created equal." It's semantics. At its root, feminism is about fighting for equal rights for everyone. So, yes, men should have equal rights, too. You know why it seems like feminism focuses more on other genders? Because we do not have as many rights as men. We have to level the playing field before we can enter maintenance mode.

Inventing Issues Where There Are None

The gender wage gap exists, and it's more imperative that we solve the problem than ever. Why? Because in six out of 10 American families, women either shoulder the responsibility of being the breadwinner or share it. More women are working than ever before, and we're still only making earning roughly 77 percent that which is earned by our white male counterparts — and that's a generous figure; it gets even worse for women of color. Violence against women is also a major issue — according to RAINN, 90 percent of adult rape victims are women. So is intimate partner violence; according to the National Coalition of Anti-Violence Projects (NCAVP), about one in 10 LGBTQ survivors of intimate partner violence experienced sexual assault at the hands of those partners. Reproductive rights remain under attack, as evidenced by the recent threats to defund Planned Parenthood and reverse Roe v. Wade. Also, adult women make up the largest group of sex trafficking victims. This is just the tip of the iceberg. No one is inventing these issues. Feminism seeks to address them because they already exist.