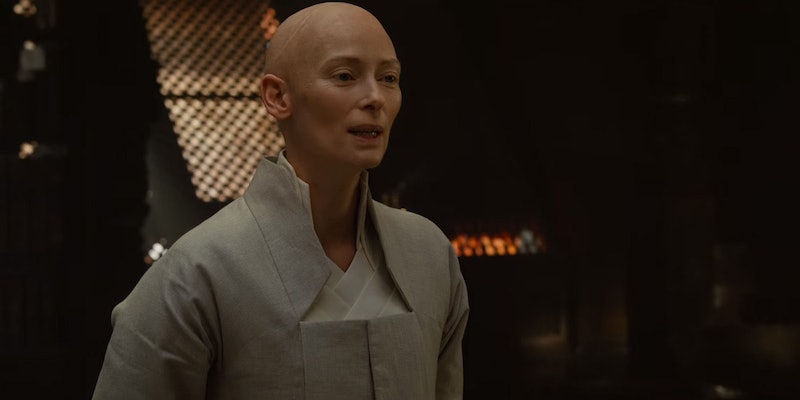 The next entry into the Marvel Cinematic Universe is disrupting the usual parade of square-jawed men in primary colored suits. Doctor Strange is a visual departure from the Avengers-related canon and that includes character design. One of the most striking images in the Doctor Strange trailer is Tilda Swinton and her minimalistic turn as The Ancient One, a master of the mystic arts who's lived a long, long life before she meets Stephen Strange. The look of the Ancient One trades in Swinton's famously androgynous presence. The actress plays the mystic dressed in a simple grey garment with a completely bare head. Fans may be wondering if the Ancient One's extreme haircut is achieved by make-up or created organically. In other words, did Tilda Swinton shave her head for Doctor Strange ?

Swinton has never seemed like the type of actor who lets vanity limit her. And her personal style usually skews more Ziggy Stardust than Vanna White anyway. (So many impeccably tailored suits in aggressive colors.) It's hard to imagine that she'd be squeamish about taking a razor to her hair for a role. And indeed, she wasn't. Swinton spoke about the character choice in an interview hosted on Marvel's official site. Not only did she agree to make the drastic change, she felt that it helped her to find her way to the Ancient One a little faster. She said:

It certainly centers everything. Because we’re making shapes and these shapes are pretty rocking, they’re all pretty graphic. We’re filling a big universe, and so the look and the sort of plasticity of us is really important to us when we’re striking poses here.”

If you're interested in Doctor Strange and its hairdos, you are probably aware of the blowback Marvel received for casting Swinton in this role. The Ancient One is depicted in the comics as an older Asian man; the movie's take is Celtic. The change has garnered criticism for cultural appropriation and erasure, and in the same Marvel interview, Swinton addressed the claims of whitewashing by saying that the comics version of the Ancient One actually inspired the departure. "The comics are the root…the source. I think, if anything, that it dignifies the comics and it says, ‘Yeah. This is a strong enough, robust enough source. We can bend it,'" she said.

After the first trailer went public, Entertainment Weekly revealed that they had been sworn to secrecy about Swinton's look after a visit to the set. “You’re not going to talk about what I look like, because we mustn’t!” she told the magazine. “Please! It would be such fun if people don’t know anything."

According to Entertainment Weekly, Swinton and Marvel made the call together to transfer Ancient One's traditional shorn look from the comics to her interpretation. The androgyny the shaved head conveys is absolutely intended. “I think it’s all in the eye of the beholder,” Swinton said regarding the Ancient One's identity. “You know, your gender comes out of the mouth of the person who’s addressing you.” You can see Swinton's "rocking" shapes in 3D or 2D when Doctor Strange opens wide on Nov. 4.