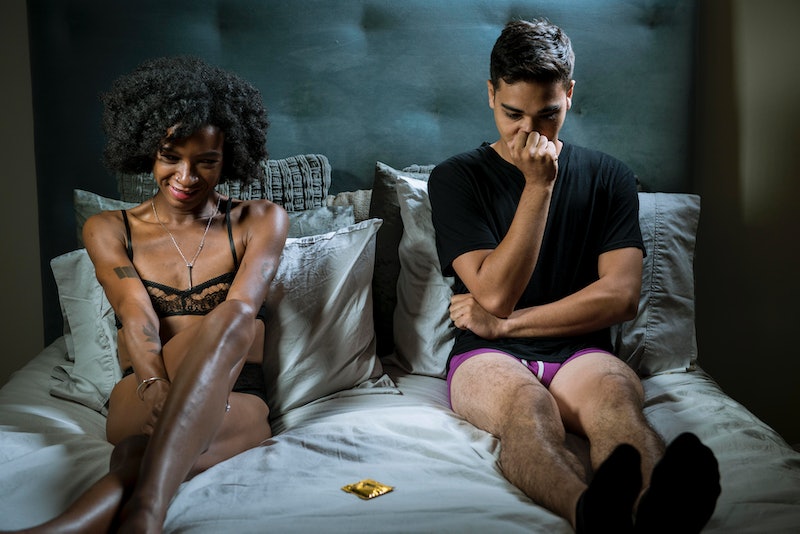 When’s the last time one of your friends told you they had a cold? Or a rash? Or even explosive diarrhea? You can probably think of at least one time recently when a friend complained about one of those illnesses — most of us can. But when’s the last time a friend told you they had chlamydia? Or gonorrhea? Or even HPV? Obviously I don’t personally know your friends but I’m going to guess that you’ve maybe had a conversation like that once in your life, if ever at all. That’s because we just don’t talk about STDs — even though we should.

Now, before you jump to “Well, all of my friends are careful!” or “No way any of them has an STD!” here are some statistics for you. According to the CDC, a full 50 percent of gonorrhea cases and 65 percent of chlamydia cases were in people ages 25 and younger in 2015. Chlamydia had a six percent rise and gonorrhea had a 13 percent rise between 2014 and 2015. Oh, and let’s not forget HPV — which the CDC says that “nearly all sexually active men and women” will get at some point — and herpes, which is present in one in every six people between the ages of 14 and 49. So, yeah, statistically? Quite a few of your friends probably have or have had an STD.

“By ignoring our sexual health, we have enabled a generation of women with more STDs than ever before,” Meika Hollender, co-founder of the eco-friendly condom company Sustain, tells Bustle. “And if you think that you're not at risk because of where you live, who you sleep with, or your demographics, think again. It’s time for all of us to talk about sex and safe sex more openly and honestly, because STDs can be life changing.”

And while I agree completely with Hollender about the potential life changing nature of contracting an STI, I’d also like to add that a lot of the common ones are more annoying and inconvenient than life changing — as long as they’re diagnosed and treated quickly. For example, most cases of both chlamydia and gonorrhea can be treated with a course antibiotics. HPV and herpes, on the other hand, are not currently curable but present in most people as minor skin irritations. So, yeah, not a lot of fun but also no more life changing than a nasty flu or irritable bowel syndrome.

But whether we’re talking about STIs that don’t show any symptoms at all or ones like HIV, which requires a lifetime’s course of treatment, here are seven reasons we need to be talking more openly about our sexual health.

For the first time in a decade, STD rates were on the rise in 2014, according to CDC data. In 2015, there were 1.5 million reported cases of chlamydia, which is the highest rate ever. And because chlamydia can show minor or no symptoms, especially in women and other people with vaginas, there are potentially many, many more unreported cases. Chlamydia can also spread to the uterus and fallopian tubes if left untreated causing pelvic inflammatory disease and potentially affecting fertility.

2. We Talk About Every Other Kind Of Illness

Whether it’s the flu or intestinal distress, our culture isn’t particularly shy about talking about most illnesses — unless they involve our reproductive system. A conceivable reason that this one part of our bodies isn’t talked about is sex negativity.

“As a generation, we have gotten so good at taking our health and wellbeing more seriously,” Hollender says. “From green juice, to oil pulling, there are too-many-to-count media sites and bloggers dedicated to the newest and greatest in wellness. But, what about sexual health? Why is that ingrown pubic hairs, and digestive issues get more attention than what's going on with our sexual and vaginal health? The reason is, there is still a stigma attached to discussing sexual health.”

The only want overcome that sex negativity, then, is to talk openly about what’s going on with our genitals, the same way we talk about any other type of illness. Making this step, however, can be really, really hard. But sit for a minute and think about it: What’s actually more shameful about chlamydia than the flu? The only difference is that it’s transmitted with your genitals instead of your mouth. That’s it. If you believe in sex positivity, you can see how absurd it is to feel shame over one body part being ill as opposed to another.

“One friend just told me the other day that her co-worker tested positive for ZIKA — which can be transmitted sexually — and she was totally freaked out,” Hollender says. “I'd have to guess that her reaction would be way different had he just had a cold.”

4. NOT Talking About STDs Can Be Life Threatening

Left untreated, certain STDs can cause serious health issues. The obvious one is HIV, which develops into AIDs and is fatal, if it’s not treated. Another one is syphilis, which can result in blood vessel and heart problems, blindness, mental disorders, and even death if left untreated, according to WebMD. (Oh, and BTW, syphilis had a 19 percent increase between 2014 and 2015.)

In Hollender’s piece about why we need to talk more about STDs, she recalls an instance when a friend of hers who tested positive for chlamydia but was so embarrassed that she didn’t tell anyone and because she wasn’t showing symptoms, she didn’t get it treated. She ended up in the ER because of “intense pelvic pain and inflammation.”

New research has shown that the ones that can be treated by antibiotics are morphing, making them harder and harder to treat. Antibiotic-resistant gonorrhea has developed in parallel with the rise in STDs and it has the medical establishment extremely concerned.

To put it simply, if we keep spreading and treating these illnesses, they become resistant to our medications to the point where we can no longer treat them. And then, suddenly, gonorrhea is no longer just a minor inconvenience but a potentially debilitating illness.

6. Everyone Is At Risk

While STIs are more common in young people and women, there is no sexually affected demographic that is not potentially at risk for contracting one. Even people who believe themselves to be in monogamous relationships are at risk: A 2015 study by researchers at Ball State University compared STD rates in monogamous and non-monogamous people and found that people who cheat were less likely to use condoms than those in ethically open relationships. They also found no difference in percentage of people with STDs between the two groups.

7. The CDC Even Recommends It

In its list of things that need to be done in order to stop the rise of STDs, the CDC includes “talk openly about STDs.” Can’t get much clearer than the country’s agency in charge of disease control telling you to talk about it, can you?