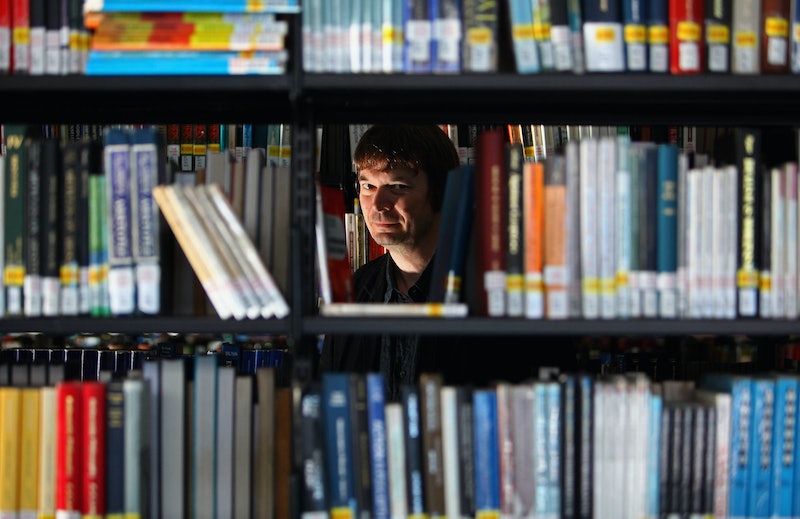 Every time I see vague creative inspiration — like this t-shirt, which proclaims “I just want to drink coffee, create stuff, and sleep” — I want to remind people that not everyone can be an artist, just like not everyone can be a rocket scientist, and there's nothing wrong with that. But a recent Technology piece in the New York Times is pushing a similar idea as that well-meaning but ultimately vapid t-shirt: today, everyone can be a writer, if they just have the right app. What a fun, modern opinion to have, right? The democratization of creative writing. In truth, it's a completely ridiculous way to approach the arts.

The piece, called “Web Fiction, Serialized and Social,” explores a social media-type storytelling app called Wattpad, in which “writers” — which means anyone — can post serialized stories and receive “feedback” — which mostly means praise — from fans. Anyone with an internet connection can sign up and write, and if they capture the attention of other users, they have a shot at something like online celebrity. Maybe they'll even get a publishing deal.

The Times treats Wattpad like it's the second coming of creative writing, when really, it's just the next version of LiveJournal or Xanga or Blogspot, but with greater user interaction. It's a free platform on which to jot down your feelings — only in this case, they tend to take the form of poems or fan fiction. And don't you dare stress about editing; Wattpad is all about fun and immediacy, eliminating all the silly "work" from the writing game. “Everyone's been given permission to be creative,” says a source in the article. Later: “[Today's fiction] is social, informal and intimate, with the results not only consumed but often composed on the fly.”

But today's fiction is not at all informal and composed on the fly. Today's fiction is a firecracker of powerful — and powerfully edited — voices, like Zadie Smith, Karen Russell, and Chimamanda Ngozi Adichie, not to mention older, already canonized writers like Toni Morrison, Marilyn Robinson, and Cormac McCarthy. This is what today's fiction looks like, and it's explosive, terrifying, tender, diverse, stringent, maddening, mind-broadening, and incredibly taut all at once. And they all have book deals and editors. And they all work hard.

People love to accuse the literary establishment (that is: agents, editors, publishing houses) of being gatekeepers in a negative sense, as though there are a million Toni Morrisons banging at the door of Random House as Random House polishes their silverware and ignores the Toni Morrisons. But are there a million Toni Morrisons banging at the door? Are there a million Cormac McCarthys? And are they all wearing that dumb t-shirt? Sure, the publishing establishment isn't perfect, and it's a hard, bloody battle to rise to the top — of course, a battle that has, historically, been worse for some than for others — but today it's easier than ever to add your writerly voice to the fray. We have self-publishing and free online submissions and more online journals than anyone could possibly read. Writing doesn't need more Wattpad. Writing needs people focused on curating all the noise.

Because not everyone is an artist, and some of the noise is just noise. We're all really into reading articles on creativity, and we're really into banners that say “Make Things,” but decoupaging a tea kettle based on a Pinterest tutorial does not make you an artisan, just like using a writing app does not make you a published author. What is this “everyone's been given permission to be creative” shtick that the Times quotes? “Permission to be creative" is a MacArthur Genius Grant, not something that the world hands you on a platter just for being born. Like anything else, creativity — if we want to be so vague — is something individuals have to hack out time for, have to make happen for themselves, have to go after Virginia Woolf's A Room of One's Own, have to force themselves to "create" with tooth and nail. For writers, generally, the “creativity” happens in solitude, and then the literary establishment steps into the process at some point to help out.

Wattpad makes people feel like artists, and maybe they're right. Maybe if you get 10,000 fans commenting on your novel, you're an artist. After all, what defines an artist is the act making art. Okay. But the writing on Wattpad is completely devoid of any editor's (or agent's or publisher's) hand. And the Times is cool with that, because this is the fiction of the future, or something. “Wattpad is not the sort of site where writers talk about suffering for their art or spend hours searching for the mot juste,” the article reads. Because that's what losers do.

But good writing usually does require suffering for your art (“Every good writer I know needs to go into some deep, quiet place to do work that is fully imagined” —Jonathan Franzen) and it does require searching for the mot juste, the “right word,” and struggling with language itself (“Don't tell me the moon is shining; show me the glint of light on broken glass” —Chekov). And it's hard. And this means not everyone will get to be a famous author. And that's good. Because without that struggle and searching, we get the writing on Wattpad, which produces poems like this one, that the Times quoted: “I’m broken/More than you could ever see/But you still insist/To love me.”

We need a literary establishment just like we need highways: to help us get where we're going faster. Because everyone has the right to write, but no one is obligated to listen.