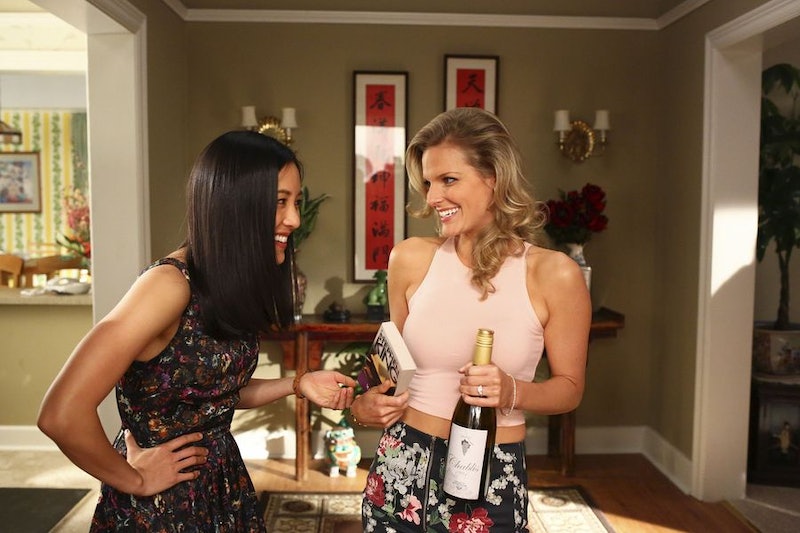 Fresh Off The Boat boasts one of the best ensemble casts on television. Everyone on the show is talented and hilarious, but I have always been especially drawn to Honey, played by Chelsey Crisp. Blessed with certain assets and plagued by an ugly rumor, the women of Orlando were wary of Honey from the start, but she formed a close bond with Jessica (played by Constance Wu) almost instantly. They’re since become my favorite relationship on the show, and Crisp tells Bustle that she loves Honey and Jessica's friendship on Fresh Off The Boat too, and for a great reason.

“I think Constance and I are really proud of the fact that virtually every scene we’ve ever done passes the Bechdel test," she says. "We rarely are just talking about Marvin or Louis. Certainly, we do talk about them, obviously, as that’s a part of any real female friendship, but they’re silly together and they can be serious together. They run a business together, [and] they give each other a hard time."

Yes, she said each other. While Jessica is the tough one in her family, her dynamic with Honey is completely different. "One of the things I personally love is that Honey is one of the people on the show that Jessica can’t get away with too much with," Crisp says. "You get to see a different see of Jessica when she’s with Honey — I think you get to see her be a little more vulnerable."

Even when Crisp isn’t playing Honey on Fresh Off The Boat, she’s part of another important female dynamic, as she's in the all-women improv group, Duchess Riot. The women have played about three shows a month throughout Los Angeles for the past six years, and Crisp hints that they'll may have even bigger things on the horizon.

“We are working on a feature, and we’re also developing a show at the moment. I can’t say a great deal about either, but in terms of the group in particular, it’s such a strong group of women," she says. "It’s eight women with all different backgrounds in comedy, all performers, most also writers." Hopefully, you'll be seeing even more of Crisp soon, but in the meantime, she can reveal more about what to expect on Fresh Off The Boat this season.

“The biggest piece of news is Ray Wise, who plays my husband, Marvin, was just made a series regular, so there’s going to be a lot more Marvin," she says. "He becomes more of a permanent fixture in our world. I have been told by our show runner [Nahnatchka Khan] that we will be meeting his ex wife — Nicole’s mom. We’ve laid all this of what the history of Marvin and we don’t know if it’s true or not — if he left his wife for her or not — I don’t know what the writers have planned, and I’m pretty excited to see.”

Something else you can look forward to when watching Fresh Off The Boat every Tuesday at 9 p.m. on ABC? An element of Honey that Crisp thinks some fans may have overlooked. “I almost never shoot scenes without a drink in my hand,” she says. “I always have a wineglass in my hand on that show. It’s really subtle — we’ve never talked about it!”

Between the constant presence of a drink, more background on her relationship with Marvin, her always compelling friendship with Jessica, and Crisp's own comedic prowess, it's safe to say that Honey will continue to be a standout character on Fresh Off The Boat.