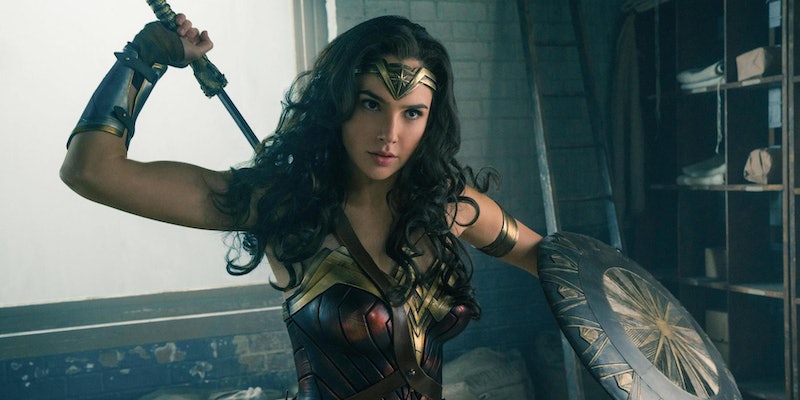 Ever since the DC Extended Universe got off to a rocky start with 2013's Man Of Steel, each movie in the franchise has gotten harsher and harsher critical reviews. However, the new Wonder Woman trailer will absolutely help ease your mind and once again get you excited about a movie with the DC logo in front of it. Given that it's the first movie of our modern superhero renaissance to feature a solo female lead, there's a lot riding on the success (or failure) of Wonder Woman. But the latest trailer proves that there's more than enough reason for hope.

Helmed by Patty Jenkins, the film goes back in time to show the backstory of Diana Prince, the character played by Gal Gadot and introduced in March's BvS. And while there are plenty of the DCEU's trademarks on display here — including slow-motion action shots, a building shooting beams of energy into the sky, and plenty of high-octane explosions — there is also a lot on display in the two-minute trailer to set Wonder Woman apart from the rest of the franchise. In fact, I don't think it's too early for me to say that this looks like it will be the best film in the enter DC Extended Universe.

Don't believe me? Here are the seven most encouraging signs.

So far, the DCEU has existed either in the greys and browns of Man Of Steel and BvS or the neon of Suicide Squad, but Wonder Woman looks to mix it up with some bright primary colors. From the striking red of Diana's dress in the trailer's opening shot to the vivid blues and greens of the hero's native island, the movie already looks beautiful.

For its first two films, the DCEU's most significant female characters consisted of a crinkly-eyed, supportive mom and a reporter with a proclivity for falling from high places. Things took a dramatic step forward with Margot Robbie's kick-ass portrayal of Harley Quinn in Suicide Squad, but even then she was just one member of an ensemble that still consisted almost entirely of men. So it's nice to see Diana not solely interacting with a supporting cast of famous male faces, but also surrounded by a veritable army of fierce warrior women.

The Marvel Cinematic Universe gets a lot of flak for its so-called "villain problem," but the DCEU hasn't exactly provided a plethora of memorable antagonists, either. I'm already more intrigued by this mysterious masked woman than I was by General Zod or Lex Luthor or Enchantress.

4. A Determined And Noble Hero

Henry Cavill's Clark Kent is a strangely reluctant superhero, seemingly resentful of the fact that he his powers require him to save the world. Ben Affleck's Bruce Wayne is a literal murderer, branding the criminals he apprehends so they'll be killed in prison. And the entire Suicide Squad had to literally be coerced under threat of death to stop a witch from taking over the world.

So it makes for a nice change of pace to see a lead character who actually seems motivated to be a hero of her own volition. "I cannot stand by while innocent lives are lost," Diana says. Beautiful.

5. Pride In The Source Material

Former DCEU films have downplayed their more fantastical elements and trying to ground them in a "realistic" and "gritty" environment. So it's thrilling to see them embracing some of Wonder Woman's more delightfully ridiculous characteristics — like her bullet-deflecting bracelets, featured in not one but two sequences in this trailer alone.

Wonder Woman seems by far the lightest entry in the franchise so far — while not sacrificing the real-world stakes inherent in a WWI-set story. "It is our sacred duty to defend the world," Diana proclaims before climbing determinedly onto the battlefield alone. It's our hero's unshakable belief that she can and will defend the world that sets her apart from some of the franchise's more glum films.

One of the main distinctions between the DCEU and the MCU has been the latter franchise's penchant for quips and pop culture references in the face of danger, as contrasted with the former's more serious tone. But Wonder Woman looks like it will finally bring some much-needed humor into the universe to leaven the deadly seriousness.

Wonder Woman will lasso her way into theaters on June 2, 2017, but you can watch the trailer over and over again until then. I know I will be.