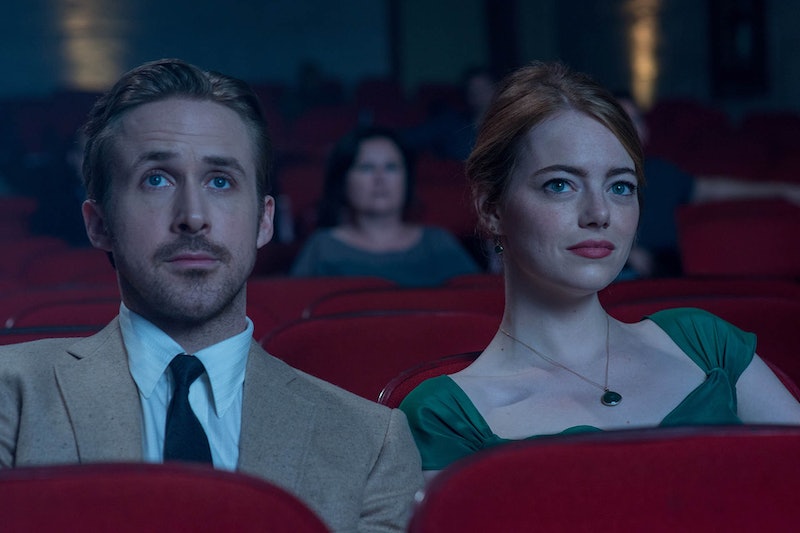 Fans have already seen two teasers for La La Land, the upcoming movie musical (and heavyweight Oscar contender) from Whiplash director Damien Chazelle, featuring stars Emma Stone and Ryan Gosling soft-shoeing their way through a series of beautifully filmed sets. Neither teaser gave much of an idea of the actual movie plot, though, with each focusing on a song performed by one of the two leads, rather than anything resembling dialogue or exposition. But the new full La La Land trailer finally provides some spoken words, and the best idea yet of what to expect from the candy-colored song-and-dance extravaganza.

In this two-minute glimpse at the film, viewers get a better sense of the story, which involves Stone's Mia and Gosling's Sebastian. They're two struggling artists in LA (she's an actor he's a musician) who meet-cute, fall in love, and experience all the pressures of making it as a couple and artists in the big city. While that may sound like a downer, the new trailer actually shifts away from the slower, more melancholy tone established by the first two teasers, and instead highlights the energy and optimism that also pervade the original musical.

Here are nine moments from the La La Land trailer that are sure to sweep you off your feet — maybe even literally.

It's always fun to watch great actors pretending to be slightly worse actors. The trailer opens with a scene of Mia at an audition. It doesn't go well, starting things off with that familiar melancholy tone — until a chance encounter with a gorgeous pianist changes things for the better.

The beloved character actor earned his first Oscar for playing a fearsome jazz instructor in Chazelle's last feature, 2014's Whiplash. He has a small part in La La Land as an equally fearsome club owner. Only Simmons could fire someone — on Christmas, no less — with such aplomb.

It may just be clever editing, but the trailer presents this scene as the moment Mia and Sebastian meet. And what an introduction! Mia has barely said five words before their lips lock, and the trailer explodes into an upbeat celebration of life, love, art, and the City of Angels.

This enchanted dance number, which takes place at sunset above the iconic Hollywood sign, is seen at various times interspersed in little pieces throughout the trailer. I can't wait to see the whole thing uninterrupted; I'm a sucker for a good soft-shoe.

5. This Say Anything Homage

Prepare for La La Land to do for car horns what Say Anything did for stereos. John Cusack may have rolled up to your crib blasting Peter Gabriel at full volume, but Ryan Gosling just honks and waves until you acknowledge his adorable presence. (The neighbors might not be so pleased, though.)

How many breathtaking dance sequences are there going to be in this movie? Here's another one in which Sebastian quite literally sweeps Mia off her feet and into the stars in LA's famous Griffin Observatory. Talk about a heavenly date.

7. This Pearl Of Wisdom

After Mia frets that, "Maybe I'm not good enough," Sebastian responds with this gem: "This is the dream. It's conflict, and it's compromise, and it's very, very exciting." These are words that pretty much every struggling artist should hear.

Oh, what's that? You want another elaborate dance sequence? How about this one, seemingly set on a crowded LA overpass during rush hour, as commuters get out of the stranded cars and belt out a song into the sunny sky? God, I love the magic of movies.

Eventually, the trailer reaches such a fever pitch that it's all just a montage of scenes so full of color, movement, and energy that it's practically dizzying. When was the last time a trailer made you feel so alive?

La La Land will tap dance its way into our hearts on Dec. 9 — and hopefully pick up a bevy of Oscar nominations soon after. Fingers crossed.