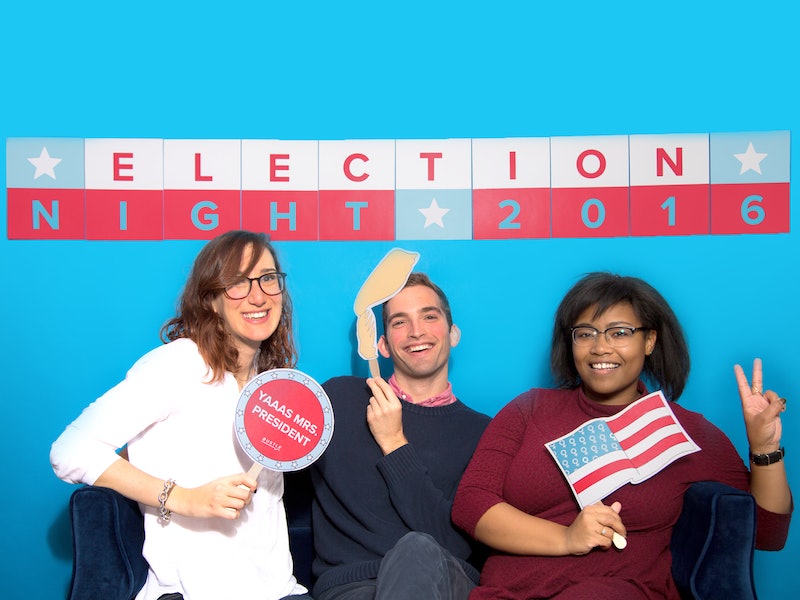 Congratulations, my fellow Americans — you've almost survived the 2016 election cycle. No matter what ends up happening come Nov. 8, you will be able to look back on these tumultuous times and regale your grandchildren with WTF tales of what it was like to be a Millennial voter during the most monumental election in recent memory. And, to celebrate the near end of such a historic election, you deserve to throw an election night party that will go down in history books as well. In the bizarre words of Donald Trump, we're talking about a bigly celebration here, people.

Granted, it's entirely possible that you plan to spend election night at home alone, armed only with a bottle of wine and a Snuggie to protect you from the chilly knot of anxiety that's taken up permanent residence in your stomach But, if you're going to be sitting there glued to your TV anyway, you might as well bring along a few friends for this bumpy AF ride. That's where Bustle's election night party pack comes in. Whether you're looking for election night decorations, drinks, or distractions, here is everything you need to throw a bash just as remarkable as the fact that this election, in all its terrifying glory, is finally over. And, now that you have your party plans all figured out, all you have left to do is go vote (seriously — go vote).

1. Hang up a banner that explains what's happening.

It's election night 2016, baby, and given the last couple of months, you're likely feeling pretty delirious. Instead of going all out with that DIY tie-dyed star-spangled banner you saw on Pinterest, assemble this easy garland in a matter of minutes.

Print out each page of letters that makes up the garland (there are 10 pages total). Line them up in the order you print them out. Watch as they magically form the words "Election Night 2016." Tape them to a wall of your choosing. Wonder at the marvels of modern printing technology. There — you're all done!

You're a Millennial, this is a big night, and you're going to want to make sure you have fleeting photographic evidence all over your Instagram Story that you were here to experience it.

From cut-outs of both candidates' faces to a uterus holding an American flag, there's something in this pack of photo prop printables for pretty much every single person at your party. Print out your props, tape them to your craft sticks, and hey! Remember that fancy election night banner you made? It doubles as the perfect backdrop for your makeshift photo booth. You can watch the Instagram likes roll in as you watch vote counts roll in. How's that for multitasking?

3. Come up with a cocktail menu.

Switch things up from the usual bottle of wine you reserved for those long presidential debate nights, and go for a drink that will really make this feel like a party. Your menu for the night:

The Bittersweet Independent: A classic whiskey lemonade guaranteed to take the edge off — no matter what happens. Ask for a dash of bitters to match your mood.

Print out the full menu here, so that guests know what they're imbibing. In the spirit of being open-minded, try one of each.

4. Play a classic game of Pin the Candidate on the White House.

Ah yes, a party favorite. For the sake of your own sanity, you're going to need to tear your eyes away from the television at least once during election night. Gather up your fellow patriots, and play a quick game of Pin the Candidate on the White House.

Tape a picture of the White House to the wall. Print out your candidates and add double-sided tape to the back of each piece. Blindfold your closest friends, spin them around once, and, well, you've been to birthday parties — you know how the rest of this game plays out.

The election only comes around once every four years, so make sure you're celebrating properly. Or, you know, just order a pizza and do whatever you want to while away the hours until a winner is announced. But come on — a game of Pin the Candidate on the White House? That's brilliant.

More like this
The 8 Best Chew Bones For Puppies, According To A Vet
By Andrea Hannah
25 Things I've Reduced My Life To, In Addition To WFH In My PJs
By Ginny Hogan
Your Daily Horoscope For August 12, 2022
By Mecca Woods
The Spiritual Meaning Of The August 2022 New Moon
By Nina Kahn
Get Even More From Bustle — Sign Up For The Newsletter