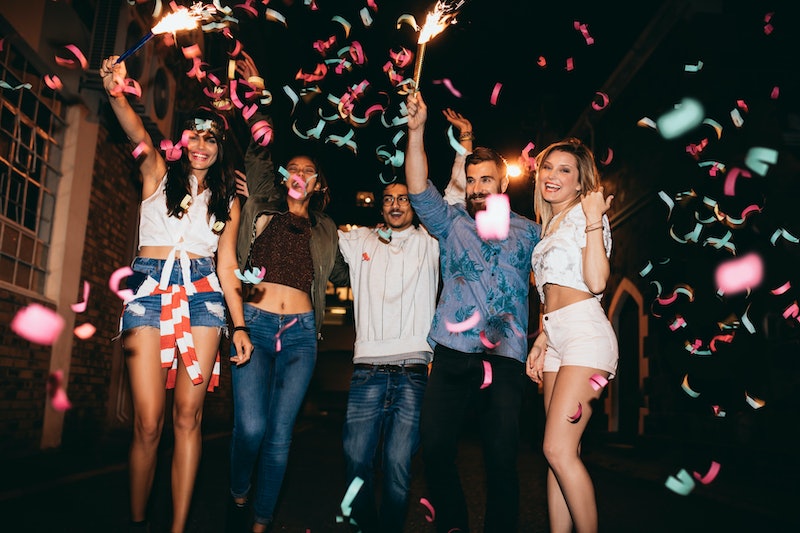 The 2016 election season has been absurdly long and full of scandal, controversy, and WTF just happened moments, so it's surely time move forward with a fun party on election night. To commemorate (or commiserate) the end of the season and the country's new president (again, you'll probably either commemorate or commiserate that too depending on the results), why not throw a festive election party with some of your politically-active friends? Because one thing will be for sure on Tuesday, Nov 8, 2016: the 2016 election season will be over that night.

Sure, an election party has the potential be tense depending on who you are inviting, so keep things light and celebratory to ward off any angry fighting between guests. Make sure you follow along with the live election coverage on TV so you don’t miss a thing and prepare plenty of fun games and themed food (and drinks, of course) to keep everyone busy during the long wait until the new president is announced. Here are some ways to get in the election spirit and celebrate, from karaoke and red, white, and blue jello shots to presidential trivia and candidate props, because after this year, you deserve it.

1. Get Your Party Playlist Together

The first step to any party is to make a festive playlist. While you’re at it, make it a karaoke-friendly night. Try out a portable karaoke mic like this one from Urban Outfitters ($40) and belt your heart out to Miley's "Party In The USA" or R.E.M.'s "It’s The End Of The World" depending on the results.

2. Game On With Presidential Trivia

Make it trivia night at your party and write out questions and answers related to this campaign season. You can ask a variety of questions like Q: What TV host talked with Trump about his tendency to not “wait” and “just kiss” women? A: Billy Bush. Or other presidential trivia. Another option is to play Truth And A Lie with the candidates’ tweets. Write out some of their tweets and make up a few yourself then have your guests guess which one is the fake.

3. Drop Red Balloons (Maybe Some Blue And White Too)

No one can forget the Clintons' faces when the red balloons dropped at the DNC. Pay homage to one of the iconic moments from this year’s race and get some red balloons ($5 from Etsy).

Give everyone the choice of Trump or Clinton mask ($2) when they walk in the door and have them share their cards of who they support. Nothing is funnier (or more terrifying) than a room full of Clintons and Trumps.

5. Spell It Out With Balloons

Spell out the names of candidates or go for something funny. You could even change it up depending on the live results. I don't know about you, but I’m leaning towards “Yikes” or “Bernie.” These from Urban Outfitters ($6 each) let you buy each letter that you need, versus a whole alphabet.

Making elephant and donkey cut-out cookies are simple and festive, but if you’re an ambitious baker, try mini cakes. My Baking Addiction’s simple cake recipe is perfect. Who says you can't have your cake and eat it too? Get the recipe here.

This nearly goes without saying, but you’re going to need something to drink. So why not make it a festive one? Try out The Kitchn's two-ingredient wine sparklers. Garnish with the leftover cake fruit and toast your friends. Get the recipe here.

At the end of the night, a champagne toast is (hopefully) in order. Instead of champagne flutes, get your hands on some election-themed mugs, like these ‘bad hombre’ and ‘nasty woman’ mugs from Etsy ($30). The mugs bonus as party favors too. Cheers to friends, politics, and the strange ways of the electoral college.