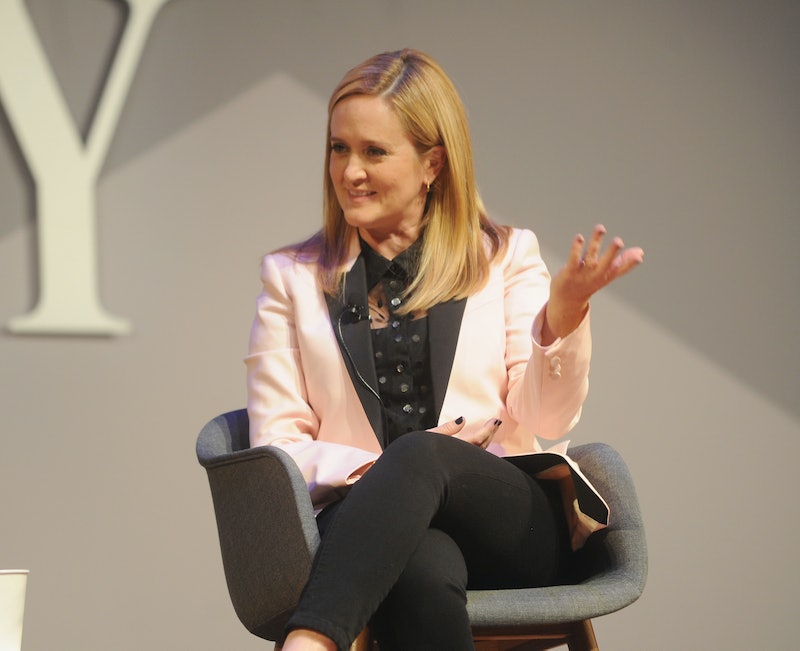 In the final stretch of what has been a stormy election season, comedian and Full Frontal host Samantha Bee has been open about expressing her views during this stressful time for our country. Thursday, during her panel at the Fast Company Innovation Festival, Bee spoke out about just how much of an impact this election has had on her and on America. "It’s like I’m slowly dying inside," Bee told the audience. "The election has rung us out. We are ready to move on."

As much as the election has been a whirlwind for the entire nation and as much as it has been exhausting for everyone involved, it's not over yet. There are still plenty of issues to be addressed and votes to be cast before we can all (hopefully) take a deep breath and relax a little.

And then there's the sexism and misogyny that have been key topics of conversation for both major political parties during this election — something we'll certainly be dealiing with for years to come. And shen she was asked whether she believed a Hillary Clinton presidency would improve sexism in the United States, Bee could only laugh at the prospect of such a coveted but seemingly distant idea.

"I think it will amplify misogyny to a degree that has just never before been seen," Bee said. Bee implied that, with Clinton as president, there would only be more opportunities for certain people to project misogynistic ideas onto her and her decisions.

As much as the nationwide discussion of sexism and misogyny make for ample material for her comedy show, Bee does not believe the future of our country is something to laugh at.

"I think that will be rich territory for us to mine on the show, and that is the only upside to it for me because I'm very fearful about it," Bee said. "No, I don't think it will solve anything. Certainly, the problem of racism was solved under Barack Obama (audience laughs), so yeah, It's going to be horrible. I like to say it'll actually be a tsunami of misogyny."

And unfortunately, the country has already experienced a taste of that tsunami thanks, in great part, to some of things Clinton's opponent, Donald Trump, has said publicly.

And, oh man, does Bee have some things to say about Trump. On Monday, Bee went all in, making the case that Trump can't read in a segment called "People Are Saying..." But Bee drove the joke home even harder on Thursday.

"Someone on my staff has been amassing data for six months and I think we cracked the nut on Donald Trump," Bee said. "It’s not his tiny hands. It's that he has a learning disability that has gone unaddressed, and he lives with the shame of that. That’s my armchair diagnosis. I'm an amateur psychologist."

Regardless of whether Bee's "diagnosis" holds true, it does ring clear that this election is not something to be overlooked by anyone. At such a crucial tipping point for our country's future, Bee hopes everyone is on the same page as election day gets closer. "Hopefully, we’ll make the right decision and hopefully we’ll have some peace from that … I’m looking forward to two weeks where I don’t say the words 'Donald Trump,'" Bee said.

We won't know until Tuesday if Bee's wish will come true. Until then, the only thing you do is go out and vote.