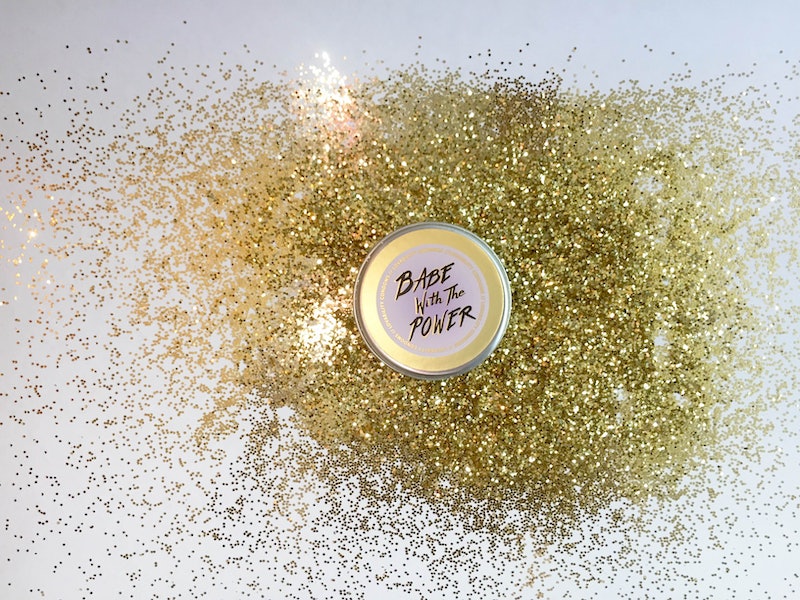 I'll be the first to admit I'm a bit condom-challenged. I'm all for sex positivity and everything, but the moment I get in front of a drug store clerk with a package of rubbers, my eyes start darting uncontrollably around the room. So, when I found out about Lovability Condoms, which are designed to combat embarrassment and convert shy women like me into proud condom-carriers, I was all about them.

Lovability condoms are different from standard ones in a few different ways, the most notable being the packaging. They come in sparkly tins with cute sayings like "babe with the power" and "talk feminist to me," which serve a dual purpose: to prevent the condoms from getting punctured and to keep them private (or not-so-private, since they're so pretty you kind of want people to find them) when they're in your purse. They even come with "F*ckboy repellant" to remind you there's no pressure to use them with anyone who doesn't deserve your affections.

Founder and President Tiffany Gaines designed them after discovering that a lot of her friends weren't comfortable buying and carrying condoms and wanting to change that. And they did change that for me! Here are some reasons I recommend them to anyone who wants to step up their condom game.

1. Those Tins Really Do Look Awesome

Who ever decided that condoms would come in those usual ugly packages? Seriously, every condom should come in a shiny tin like these ones. Plus, once you're done using the condoms, you can use them to carry pills or other small objects.

2. It's Easy To Put Them On The Right Way

OK, so I'm condom-challenged in more than one way. Maybe I have a bit of a problem figuring out the right way to put them on. Not so with these. Rather than the typical plastic wrappers, they come in shallow containers so you know where the top and bottom are and you can't rip them. They also stick up in the right direction more than your standard condoms. No more messing it up and having to take out another one (or worse, putting them on the wrong way then flipping them over and putting them on again, which can pose a risk for STIs).

You'd think lubrication would be the norm given how much better they make condoms feel, but sadly, it's not. It is with these, though! The vegan, all-natural latex condoms are lubricated with long-lasting silicone so they make safe sex feel good.

4. They're Starting A Revolution

Seriously, condom companies like Lovability are changing the way we view safe sex — and sex in general. The more people who carry condoms proudly, the less shame will surround women who openly enjoy sex and the less onus there'll be on women to singlehandedly prevent pregnancy.

Lovability Condoms, Gaines explains, are far more than just condoms. They're "a tool for women to proudly assert power over their bodies and future." Cheers to that.