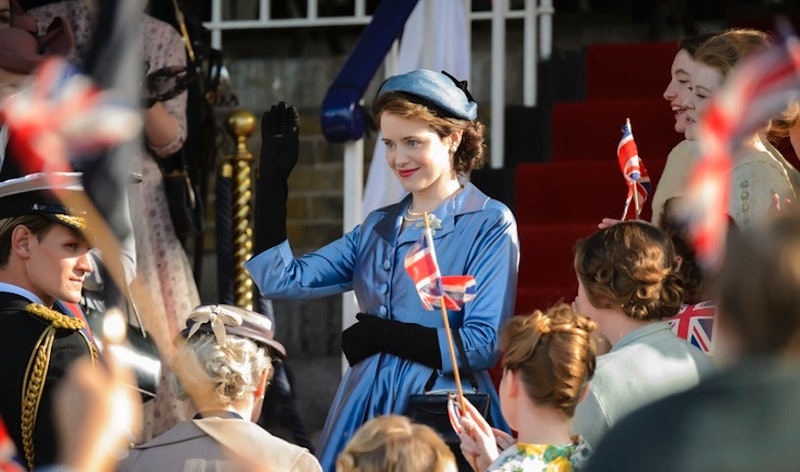 If I had my way, there would be endless seasons of The Crown , Netflix’s new hit show that chronicles the life and reign of Queen Elizabeth II. After marathoning the first season, I was crossing my fingers that the show would eventually cover some of those more modern moments in royal history. With an entire lifetime of drama and political stakes to portray, there's certainly enough ground here for this amazing new show to last for quite a while. So when the show’s creator said he wasn't thinking about anything beyond The Crown Season 2, I started to worry about how many seasons of The Crown there would be. With an entire reign to cover, there needs to be plenty more where the first came from.

The official answer first: Netflix has already promised that this show will be one of the streaming service’s biggest yet. It’s ambitious in scope and budget, because it's been officially announced that there will be at least six seasons of 10 episodes each of this new show. But that doesn’t mean that it will end with Season 6. I could see The Crown carrying on for seasons to come if the reception is strong enough. Especially when you consider just how long Queen Elizabeth has been steering the British ship.

Luckily for us, descriptions of the scope of the show include modern day issues facing the royal family. The show intends to follow the entire length of Queen Elizabeth’s reign. That means that some of the most famous royal events in recent history, like Princess Diana and the marriage of Prince William to Kate Middleton, will likely be included. That might be reason enough for royal fans to celebrate, but, with Queen Elizabeth’s reign still in progress, I could see there being more than just six episodes. Who knows what will befall the royal family after the show catches up to the 21st century?

Hopefully only good things, of course, but enough good things that it will necessitate future seasons of The Crown. I don't know about you, but this anglophile wants the show to last forever. And, if I had my way, it definitely would.

More like this
'The Crown' Season 6 Has Suspended Filming "Out Of Respect" For The Queen's Death
By Bustle Staff
Kate Middleton Wore The Ultimate '90s Power Suit
By Sam Ramsden
'The Last Of Us' Episode 4 Put Twitter Into An Emotional Spiral
By Alyssa Lapid
Netflix Shut Down 'Bridgerton' S3 Rumours About A “Very Dark” Storyline
By Bustle
Get Even More From Bustle — Sign Up For The Newsletter
From hair trends to relationship advice, our daily newsletter has everything you need to sound like a person who’s on TikTok, even if you aren’t.