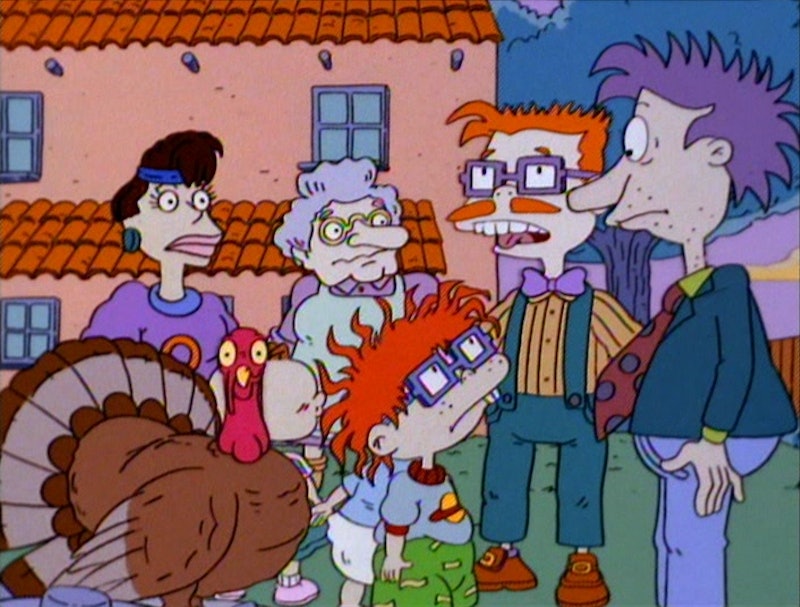 As I prepare to wrestle a large bird into the oven and lovingly baste it for hours on end, I can't help but wish I had a time machine to set the calendar back some 20 years. There were certain things every '90s kid did on Thanksgiving that made the holiday special (even though there were no presents involved). As a kid, Turkey Day was pure fun: We didn't have to worry about the supermarket rush, the never ending food prep, the inevitable family drama, or the exhausting cleanup; home from school for a four day mini-vacation, we were free from responsibility! Today, as I stare at my pre-Thanksgiving to-do list, I try to live in that warm and comforting memory just a little bit longer.

As the fourth Thursday in November rolls around once again, I can't help but be a little jealous of '90s me. I'll go out on a limb and say that the '90s were the best decade for holidays. From the TV specials to the toys and games, the '90s had it all (plus Beanie Babies). So before holiday stress settles in, let's all take a moment for some good ol' nostalgia by remembering Thansgiving traditions that every '90s kid will find as familiar as the taste of canned cranberry sauce:

Every November, children in classrooms across the country would make these iconic "crafts" to celebrate Thanksgiving. As a '90s kid, I remember proudly tracing my hand on a piece of paper and coloring in the outline red, yellow, and brown with my Mr. Sketch scented markers. Heading home for the Thanksgiving break, my best hand turkeys would undoubtedly be stuffed in my Lisa Frank backpack to be used as decoration around the house. Why these were so popular, I'll never know, but it just wasn't Thanksgiving without them.

Performing In A School Thanksgiving Play

While they may have fallen out of favor today, in the '90s you couldn't get out of elementary school without participating in a school production recounting the tale of first Thanksgiving feast. The short play, usually performed at an assembly for parents, was sure to include all the major players such as the Mayflower, the Pilgrims, and the Native Americans... and would be heavily edited, of course. Historically accurate? Not so much. And maybe a little weird and troubling in retrospect.

Waking Up Early To Watch The Macy's Thanksgiving Day Parade

Despite having the day off school, in the '90s, you wouldn't find any kid hitting the snooze button on their Nickelodeon alarm clock. With a start time of 9:00 a.m. EST, kids across the coutry would wake up with the sun and tune in to NBC to catch all their favorite cartoon characters float down 5th Avenue in all their oversized, inflated glory: Arthur, Rugrats, Spiderman, Goofy, Garfield, Bart Simpson, and Barney were just a few of the special appearances.

Whether you were cuckoo for Cocoa Puffs or you gotta have your Pops, cereal was an important part of every '90s kid's balanced breakfast. While these bowls of oats and other grains might have been a little on the sweet side, they tasted amazing and had prizes buried inside — which, let's be honest, was really all that counted! Even though as adults we tend to forgo large meals before a big Thanksgiving feast, as kids, we did no such thing. I still have fond memories of watching the parade while attempting to balance a bowl of Cinnamon Toast Cruch on my lap. It was surprisingly difficult, but totally worth it.

Celebrating The Day Off With Holiday TV Specials

If you weren't interested in watching the National Dog Show after the Macy's Thanksgiving Day Parade (it was really more of an adult thing, right?), what better way to celebrate your free time than by flipping the dial to one of the numerous holiday TV specials? It wouldn't take you much time at all to find a rerun of A Charlie Brown Thanksgiving or one of the annual Friends Thanksgiving-themed episodes (Monica with a turkey on her head, anyone?). These excellent '90s gems were sure to make you feel all warm and fuzzy inside, while getting you in the mood for turkey!

Bundling Up To Play Outside

After consumming an admirable amount of TV, around 1 p.m., parents would usually take a break from holiday prep long enough to realize that you haden't moved from the screen since early that morning. For your own health or to claim the TV for football, you would be cruelly kicked outside "to play." This was well before the time of cellphones or laptops, and if you were sent to play outside, that's exactly what you had to do. To occupy this idle time, you would have to make your own entertainment by jumping in a pile of leaves, kicking a ball around, or biking around the neighborhood. If you were lucky, you grabbed your Game Boy to play Donkey Kong until your hands got too cold; otherwise you had to (gasp!) invent your own games.

Thinking Really Hard About What You Are Thankful For

As a '90s kid, you were probably asked multiple times to reflect on what you were grateful for around the end of November. In all likelihood, you had to disclose these thoughts at school or around the dinner table, so the pressure was on to find a good thing to share. Of course, you could always say "my family," but everyone said that. In order to be the best at giving thanks, you had to come up with something unique, something true to you as a person. But for some reason when you said, "I'm thankful for my new Tamagotchi," people didn't look too impressed. Go figure?

After an hour or two of fresh air, it was time to get dressed for the big event! This would usually entail putting your most colorful plastic barettes in your hair and laying out your best '90s clothes. But no matter the outfit, for some reason your mom would make you don a scratchy sweater that would leave you itching all throughout dinner. The only thing that could fix the injustice of the wool sweater would be apple pie for dessert, so the evening wouldn't be entirely ruined afterall.

Helping To Decorate The Table

While the adults finished up making the food, usually it would be up to the kids to give the dinner table some festive autumnal flare. Jazz up the Thanksgiving table with colorful leaves you pressed at school, or those aforementioned hand turkeys. As a kid, you weren't quite sure where the fork and knife went, but definitely knew you had to be on good behavior and not decorate with all your Ninja Turtle action figures to get presents come Christmas.

You may love it now, but back in the day you thought that red stuff tasted "so gross."

Turkey comas were as good in the '90s as they are today. Thankfully, we can still fall asleep early and log a long night's rest without worrying about school or work on Friday. Hooray!