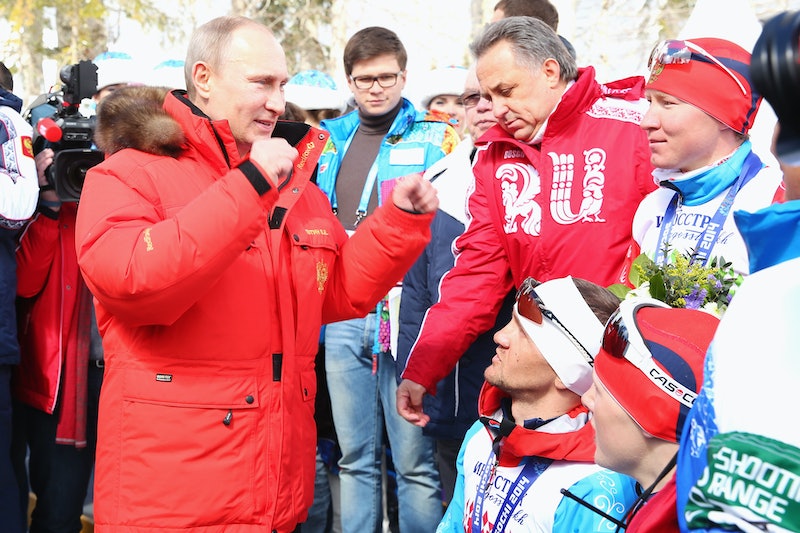 As Russian troops inch precariously close to Ukraine's border, President Obama has reiterated that President Vladimir Putin should move Russian military forces back now to reduce tensions with Ukraine and the rest of the world. The United Nations Security Council plans to meet Friday to discuss reports that Russia is deploying troops close to Ukraine's border for more than just military practice exercises, as Russian authorities claim.

The buildup of roughly 50,000-100,000 troops also reportedly involves concealment of supply lines, which could signal a long-term plan to invade by the Russians. Which shouldn't be a gigantic surprise, because since moving quickly to take over Crimea on March 18 — and Ukraine's combat dolphins to boot— Putin has shown a blatant disregard for international rules and diplomacy.

Here's the shortlist of things Russia has decided it could care less about...

Putin basically laughed in the face of the United Nations after the organization voted Thursday for a resolution recognizing the annexation of Crimea as illegal. Russian representatives argued that Crimea was always part of Russia — at least, until 1954, when Soviet leader Nikita S. Khrushchev gave the peninsula to Ukraine.

But the resolution is only symbolic, of course. And Russia's not buying it.

“The counterproductive initiative with the General Assembly’s resolution only complicates efforts to stabilize the internal political crisis in Ukraine,” according to the Russian Foreign Ministry's website.

U.S. ambassador Samantha Power condemned Russia's action. “The chaos that would ensue is not a world that any of us can afford,” she said.

Russia's reaction to getting kicked out of the G8? "Meh."

The now-seven members of the most industrialized countries in the world voted Monday to suspend Russia from the team, because the country violated international law in its swift takeover of Crimea.

The G7 now comprises the United States, Britain, Canada, France, Germany, Japan, and Italy, taking it back to its 1998 roster without Russia.

“G8 is an informal organization that does not give out any membership cards and, by its definition, cannot remove anyone. … All the economic and financial questions are decided in G20, and G8 has the purpose of existence as the forum of dialogue between the leading Western countries and Russia,” Russia's Foreign Minister Sergey Lavrov said.

So Russia equates the G7 with nothing more than a high-rollers club. Besides, it's got more pressing matters to attend to now, like all those military troops hanging out at the Ukrainian border.

Sanctions, smanctions. Russia thinks it can make do perfectly fine by itself, thank you very much.

Last week, Obama announced economic sanctions of 20 Russian officials and one bank. The U.S. House has legislation in the works to expand the sanctions and provide Ukraine with economic aid, but it's been delayed by the slow-moving Congress (shocker). The European Union has threatened stronger sanctions.

Even though Russia's credit gets shakier by the day, Putin doesn't seem too worried about the whole thing — probably because Europe imports a good chunk of natural gas and minerals from Russia.

"It is very difficult to replace gas and oil from the global market in the short term. … This discussion is even maybe dangerous for Europe and will not bring the desired effect in Russia," says Stefan Meister, senior policy fellow at the European Council of Foreign Relations.

But if Russia's economic relationship with the rest of Europe was cut off, it could be quite hurtful, experts say. If Europe decreases or ceases its energy imports, Russia's wallet would take the fall.