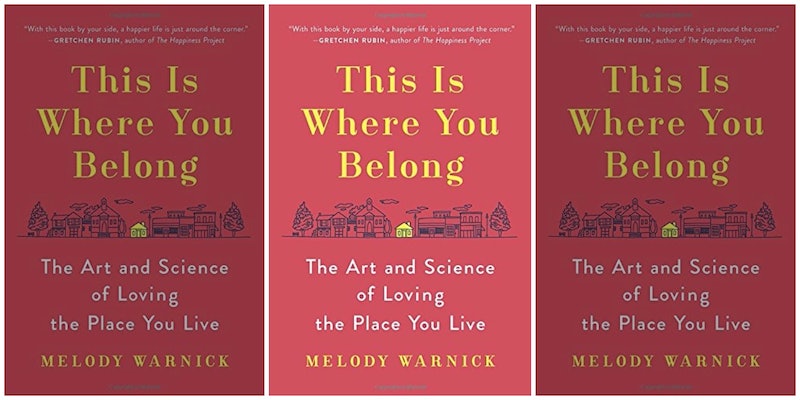 In the television show Parks and Recreation , Leslie Knope — played by Amy Poehler — tirelessly works for the good of her town, Pawnee, despite the fact that her community doesn't love her back. At all. She’s kicked off her city council. She’s yelled at in meetings. She's accused of sexual misconduct with no evidence. She’s asked to resign in disgrace from her job in the Parks Department. Many viewers found themselves drawn to Leslie Knope's struggle in Pawnee because it rang so true to their own. I felt it myself when I moved to a new city.

In her book This Is Where You Belong , Melody Warnick talks about feeling displaced in a new city. She writes about her experiences moving to Blacksburg, Virginia, and thinking: “What if I try my hardest to love this place?” Her experiment forces her to come to the realization that the people of Blacksburg are shockingly indifferent to her struggle. Not hostile, but indifferent. They have their own things going on. People who are well connected to their place often don’t empathize with new folks, and that can prohibit transplants from being able to connect.

It's a lonely feeling. I know from experience.

I feel this constantly in my small city in Ohio. I moved here about a year ago, and I bought a house with my new husband. We bonded over the fact that we wanted to live in a community where people were different from us — a place where our views would be challenged but where we would also know everyone deeply.

Some of the aspects of living in a small city from Warnick's book rang true for me. There is a small but thriving group of community-engaged individuals who are trying to breathe life into a stagnant economy here. My husband and I have been pretty tireless about walking around town, introducing ourselves, and trying to start friendships with our neighbors. But it’s a very long process to find people who have the time and inclination to become close friends with someone new.

But we've had some success, and I've managed to stay positive with help from Warnick's book. In a chapter called "Stay Loyal," she writes that you would move forever if you tried to find the perfect town. Our success has been that we haven't given up; we haven't moved away. We built a Little Free Library in our yard to give books to the middle schoolers who pass by on their way to and from school. We've started a neighborhood newsletters. We've gone to parties, even when we felt awkward, and we've supported local businesses. It's working. Slowly.

What I love most about Melody Warnick's book is she discusses a term that perfectly pinpoints the emotions I feel in this rollercoaster ride to acceptance: place attachment. Basically, place attachment is how much we care about the place where we are. It's important to acknowledge that many people don't choose their place, but instead have it chosen for them. I hope that the lessons of the book can make people intentional about the places they live even if they cannot measure up to Blacksburg, because I really believe there’s something valuable about making sense of the towns and cities where we abide.

I recently had my first dinner party for people I had met since moving to my town, which is one of Warnick's suggestions. She writes about having neighbors over for dinner as if it's a rather commonplace suggestion, but for people in the millennial generation, I don't think dinner with near-strangers in one's home is common. I spent the day cooking and cleaning, getting the house ready for these people, who I'd met everywhere from political campaign meetings to restaurants to the local community garden. About 20 minutes from the start of the event, I nearly broke down to my husband — one of the most social people who was supposed to be attending — had a conflict. I was terrified, in a real but very first-world-problem kind of way, that people would have a terrible time and would not connect at all. I wanted to cancel.

Luckily, it was too late to cancel. So, in an attempt to save face, I also managed to have a wonderful party. The people who came seemed happy to have a place to discuss things they loved: our city came up a lot, but so did having dogs, and how people met and fell in love, and favorite kinds of food and upcoming business ventures. I tried to hold on to the feeling that I had when everyone had gone home and the house was fairly empty again: it was the feeling of belonging just as elusive and explosive as Warnick makes it out to be.

Warnick references a friend whose philosophy in a new town is to "show up to everything; talk to everyone." There's a certain amount of privilege inherit in this advice, and it isn't realistic for everyone. I admire anyone who is able to take it to heart and does so, but I am especially proud to be carrying it out in a town full of people whose experiences and lives do not mirror my own. It's a small kind of courage, but little victories, like the dinner party, make me think I can get to where Warnick is at the end of the book: still occasionally fatigued with the effort it takes to be place-attached, but feeling settled all the same.

More like this
Are Virgo & Capricorn Compatible In A Relationship?
By Kristine Fellizar
Indian Matchmaking’s Viral Revealed A Major Clue About Her Relationship With Aashay
By Radhika Menon
Nicola Walker’s IRL Husband Is No Stranger To TV Screens
By Darshita Goyal
Virgo & Sagittarius Zodiac Compatibility, According To Astrologers
By Kristine Fellizar
Get Even More From Bustle — Sign Up For The Newsletter