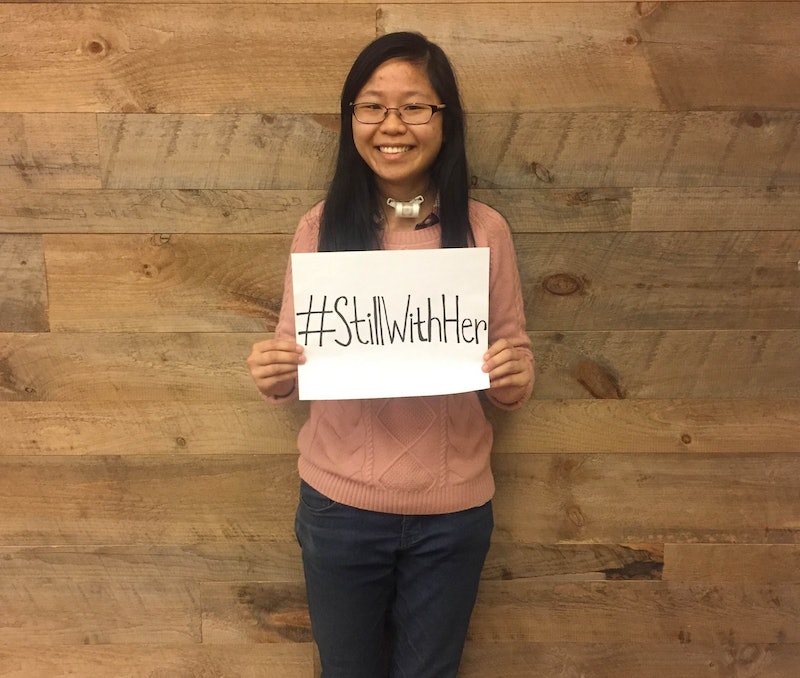 It was 3:45 a.m. when I got home on Tuesday night (or rather, Wednesday morning) after Donald Trump won the presidential election. I had work the next morning at 10, but I refused to go to bed. Instead, I popped some leftovers into the microwave and did some cleaning around the apartment. I don't make a habit of doing mundane things during the wee hours of the morning, but I hadn't eaten all day and it felt like the adrenaline in my body needed to wear off. But honestly, most of all, I just didn't want to go to bed, only to wake up the next morning and realize with horror that this entire election wasn't just a nightmare.

Flashback to 17 hours earlier, when I had just arrived at the Jacob K. Javits Convention Center in New York City, where Hillary Clinton was hosting her election night party and was expected to give her victory speech. For the majority of the day, I stood (sometimes sat) in line outside the Javits Center along with hundreds of other people. Chants of “It’s time. It’s time. It’s time for a woman in the White House!” filled up the sidewalk. In the afternoon, I got to know several Hillary superfans, from millennials with their faces painted blue and their shirts covered in "shattered glass" metaphors to 70-year-old women who'd followed Clinton for decades and couldn't wait to finally, finally witness a female presidency.

They told me about their newfound optimism for the future, their personal struggles with breaking through glass ceilings like career advancements and minority stereotypes, and their thoughts on why Clinton meant so much to them.

It's not just that I (and many others) believe Clinton was the most qualified and experienced candidate for the job. Sure, she was Wellesley College's first student ever to deliver her class's commencement address, a twice-elected U.S. senator, and the secretary of state when the United States killed Osama bin Laden. But she also was, still is, and always will be to me a symbol of the feminist movement and the power of inclusivity. (Remember the time she visited Beijing in 1995 and declared that "women's rights are human rights," and the time she helped secure health care for eight million kids?) A win for Clinton would've sent the message that people of all identities across the spectrum deserve an equal chance to reach their fullest potential.

Ultimately, Clinton has done more for this country than many of her male counterparts, including Donald Trump, and I was waiting for the moment when she could finally get the credit she deserves as our new leader.

Personally, I felt like I needed to sit this through and stick with Clinton and all of her supporters until the end. I didn't want to leave.

I was there at Javits Center that night working as a politics writer for Bustle, but I was also there as a disabled woman of color who supported Clinton and believed she would make the nation better for all Americans. There was something special about being in the company of others who were so excited to back a woman in a male-dominated race, and who wholeheartedly believed the exact same thing as I did. Strangers-turned-friends reserved my seat when I had to go pee. Someone offered me food. I bonded with their kids.

Perhaps, that's why it was so heartbreaking when we finally found ourselves in the middle of the Javits Center later that night (under a glass ceiling, no less), standing in utter shock, grief, and solidarity with one another as more and more states turned red on the giant television screen in front of us.

On my way out, I saw a woman whom I'd befriended earlier, a 59-year-old superfan wearing a "Caution: Shattered Glass" T-shirt. Her face was red and splotchy. I gave her a tight hug without a single word, and for a moment we held on to each other for dear life.

Nobody was clapping, making small talk, or munching on snacks like before. Everyone was standing with their coats on, their eyes glassy and glued to the screen. My home state, the swing state of North Carolina, turned red. So did Florida. Some people started sobbing silently, having already done the math. People knew what it meant, yet nobody dared to say it out loud: Hillary Clinton was losing.

Around midnight, when a political analyst on MSNBC said he believed that it was all over and Trump was going to win the election, I burst into tears for the first time.

I was heartbroken, and I still am. I couldn't believe that this, that Donald Trump was what millions of American people really wanted. Political analysts and social media commentators were attributing the shocking results to a variety of reasons: social acceptance bias, the media's lack of comprehensive reporting and overly confident predictions backfiring, and the Electoral College (because Clinton won the popular vote).

Some people started to leave, because the results were in and they felt like there was no point in sticking around for the misery, even if that meant missing Clinton's potential address. Different people deal with bad news in the ways that are best for them, and that's totally respectable (as long as they're safe and non-harmful). Personally, I felt like I needed to sit this through and stick with Clinton and all of her supporters until the end. I didn't want to leave.

The television screen went blank after a while. At 1:48 a.m., the song "Ain't No Mountain High Enough" began to emanate throughout the Javits Center. Thousands of people started to clap and sing along quietly: "If you need me, call me. No matter where you are, no matter how far." Journey's "Don't Stop Believin'" came next, along with shouts of "Hillary! Hillary!" I started to choke up. Even in the midst of this horrible, unexpected period of defeat, thousands of people who had been here all day were, in spite of everything, #StillWithHer.

Shortly before 2 a.m., Clinton's campaign chairman, John Podesta, appeared at the podium with the news that Clinton wouldn't be coming after all. For a split second, I couldn't help but feel a little let down, especially since thousands of men and women who had waited all day were now crushed and desperately needed something to hold onto. But then I tried to imagine what Hillary, Bill, Chelsea, and the Obamas must be going through, and I just couldn't.

For every crack in the glass ceiling that we make, we're that much closer toward a more equal, accessible, and tolerant society.

After Podesta left, the crowd immediately began to disperse. On my way out, I saw a woman whom I'd befriended earlier, a 59-year-old superfan wearing a "Caution: Shattered Glass" T-shirt. Her face was red and splotchy. I gave her a tight hug without a single word, and for a moment we held onto each other for dear life. Not more than an hour later, I was back home microwaving leftover pasta.

For the past couple of days, I've been experiencing waves of strong, mixed emotions. Anger. Fear. Sadness. Confusion about what it will mean to live as a disabled woman of color under a Trump presidency.

But today I noticed a shift in people's responses to the election. People are urging the Electoral College to vote for Clinton on Dec. 19. They're thanking Clinton for everything she's done and pledging to continue being a champion for good. They're sharing lists of soon-to-be vulnerable organizations to donate to, including Planned Parenthood and Trans Lifeline. They're personally reaching out to their friends from marginalized communities.

In spite of everything that's happened, I believe that love still trumps hate. This was painful for a reason. We worked so, so hard to get to where we are now, and yet we failed. But our job is far from over. For every crack in the glass ceiling that we make, we're that much closer toward a more equal, accessible, and tolerant society.

Hillary Clinton brought us together, gave us the confidence and motivation we need to continue fighting. Like she said in her concession speech, "I still believe as deeply as I ever have that if we stand together and work together with respect for our differences, strength in our convictions and love for this nation, our best days are still ahead of us."

I agree, Hillary, and I'm still with you.