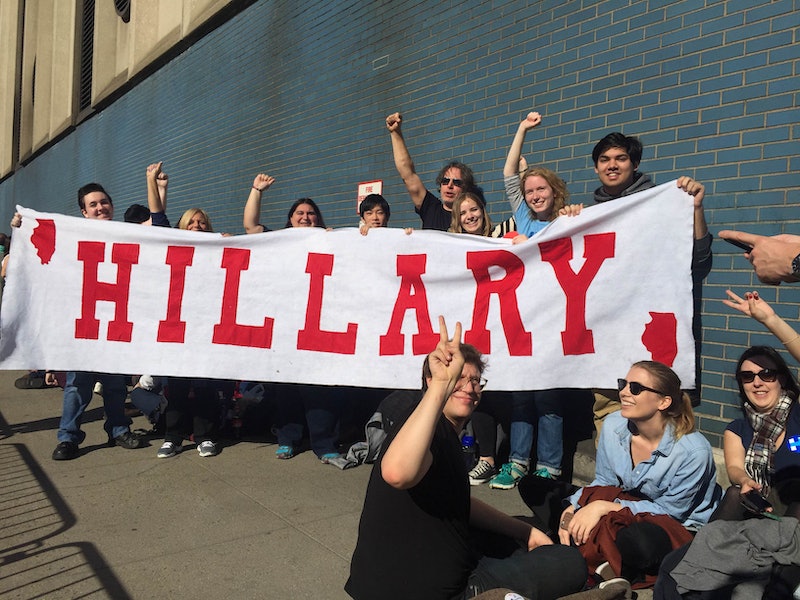 While millennial women have not always been Hillary Clinton's biggest fans, for the older generations of women, the prospect of seeing a female president of the United States for the very first time feels unreal – in the best way possible. On a sunny Tuesday morning, the final day of the 2016 presidential election, I am waiting to get inside New York City's Javits Center, where Clinton will give her election night (victory?) speech. As I stand in line, many women from the Baby Boomer generation tell me different variations on the same concept: that this is a dream come true. Many said they've closely watched and followed Clinton’s journey through politics for decades, and it’s all led up to this night.

One woman, Deborah Gavito, tells me that seeing a woman possibly become president reminded her of what it felt like to see gay marriage legalized, in that she never thought it would happen. There’s a short-haired woman, Liz Maratta, wearing Clinton’s campaign stickers as earrings. She tells me that she’s been waiting in line here since this morning. Another woman is wearing at least five “I’m With Her” buttons pinned to her t-shirt.

These women are excited, animated and confident that Clinton is going to come out the presidential winner Tuesday night. None of them are passive supporters or attending just because they didn’t like the other options. They talk as if she’s already won. I asked 11 of these women to describe what it’s like to experience the possible Clinton win in person — and in one word.

“(Hillary Clinton) has been so resilient, so strong. I have a sense of her history from the time she was First Lady. No matter what, she gets up and works…It’s unbelievable that we’ve had an African-American president and now we’re going to have a female president. It represents possibility.”

“I’m proud that a woman is finally going to make it as president of the United States. I think it’s important to celebrate firsts and breakthroughs. She’s such a qualified candidate that we’re lucky that she’s the one to do it.”

“To me, (Hillary) just has stuck to her convictions from when she was very young. She hasn’t wavered. She’s slayed all these dragons and spitting fire, and she always won. That just shows the power of us women, that we can do it. ‘Herstory’ is being made tonight, instead of ‘history.’”

“The toughness that (Hillary) exhibits every day of her life – you have to be fearless to be in a leadership role because you’ll have to make decisions about people, about policies that may not be popular, but you still got to function. You’re gonna have a minority in every decision that you make... I admire her tenacity to continue to learn and continue to grow, and constantly search for answers that will make things better for all, not just for her. She has withstood the test of time.”

“I’m here because I strongly believe that Hillary is going to win. I want to be here and witness history in the making. I also want to show that I’m a Hillary supporter, not just anti-Trump. I think what it shows is that our country is continuing to progress… I see a female in office as an extension of the continued growth in our country becoming a united America.”

"I'm 71 years old and we have the most qualified candidate in my lifetime. (Hillary's) going to change things for the better for my children and grandchildren, and everyone who is going to come after."

"It's historic but that's not the reason I'm voting for (Hillary). She's incredibly smart, dedicated and persistent...One of the things I admire the most about her is she's a pragmatic progressive who knows how to get things done. She reaches across the aisle. People who have worked with her like her, both Democrats and Republicans.

I wouldn't vote for a woman president who isn't qualified. But I think the fact that she is a woman is historic. When I was in college, I was a political science minor and noticed there weren't many women in politics. At the time, it just never occurred to me. I don't think a lot of women would've gotten away with a lot of things that Trump has done this election. If [Hillary] had said, 'What a nasty man,' I can imagine what the press would've done with that.

"Believe it or not, in the fourth grade in 1962, a teacher asked me what I wanted to be and I said mayor of New York. Most women wanted to be secretaries or mommies. They asked me, "Where did you get that from?" And I said, "I don't know, it's just what I aspire to be." My teacher was very surprised. Fifty-four years later, there's going to be a woman president. I felt like I had a vision."

More like this
It’s Official: The Bachelorette Is No Longer A Fairy Tale
By Samantha Allen
The 5 Best Underwear For Preventing Wedgies
By Lisa Fogarty
Beyoncé & Madonna’s “Break My Soul” Remix Honors A Group Of Black Icons
By Stephanie Topacio Long
Are John Legend & Kanye West Still Friends? The Singer’s Latest Update Is Candid
By Brad Witter
Get Even More From Bustle — Sign Up For The Newsletter