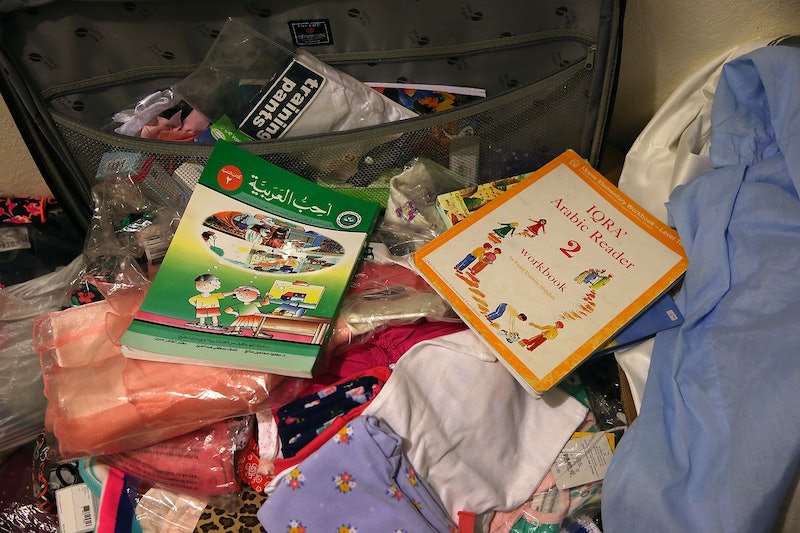 It might not feel like it yet, but technically, it's finally spring! That means no more snow (please God), which is great, because Mother Nature really outdid herself this year. We also now have longer days, which equals more happy hours, and less seasonal affective disorder. Yes, in a couple months, this winter will be but a faint nightmare we're all repressing.

But spring isn't all fun and floral dresses: The season also means that it’s time to clean house. Yes, spring is a great time to take stock in your belongings and life, and to say goodbye to those things and people you probably should have ditched at the start of the New Year, but had a hard time letting go of. (Yeah, we know all about that booty call.)

Here's your definitive plan of attack.

Seriously, throw yourself in there with the fervor of a thousand mother-in-laws. The general rule of thumb is that if you haven’t worn it in six months, you needs to toss it. Apparently, women have only worn 20 percent of their wardrobe in the last three months, and 15 percent of their clothes have never even been worn in the first place. What are you waiting for? If you don’t wear it, then sell or donate it to make room for new stuff you'll never wear! There are tons of people who would love to get their hands on that Madewell dress that’s now out of stock. If you’re a “parting is such sweet sorrow” type, then try pawning off your beloved frocks to your friends first. At least you can keep tabs on them that way.

TAKE STOCK OF YOUR FRIENDSHIPS

Not only are toxic friendships an overall pain in the ass, but they can also emotionally and physically wreak havoc on your world. If you’re in a toxic friendship, you know it. If your stomach twists and turns at the very thought of hanging out with this particular person — or if every time you see them you feel like utter shit — then it’s time to say adieu and make more room in your life for good friends.

It's important to come to the breakup sesh prepared. Not only should you absolutely, positively do it in person, but also have specific points as to why this relationship isn't working out, without placing blame entirely on them. It's hard to make someone see where they may fall flat as a friend, so proceed with a cautious honesty that shows that, despite the breakup, you're hurting, too. You'll be glad you did it.

This is where we get literal. Think about all that dirty snow and salt that attached itself to the bottom of your boots all winter long, then decided to melt in your home, leaving behind dirt, crud, and whatever the hell else. Whether it means shoving your vacuum in places you didn’t even know it could possibly fit, or getting on your hands and knees to scoop up the dust bunnies that invaded your humble abode, just do it. Your summer is going to be way too fresh and clean for that mess.

You’ve probably spent more time inside than outside this past season because, let’s be honest, this winter was hell for everyone besides Californians. Between the heat you had torqued up to stave off hypothermia and the dry winds themselves, your skin needs some serious spring cleaning. There’s no time like the present to get your pores unclogged and your epidermis moisturized, moisturized, moisturized! Hell, if you can stand being bound in one of those full-body moisturizing wraps without feeling like you’ve been placed in a straitjacket and are now starring in your own version of One Flew Over The Cuckoo’s Nest, then do that, too. Your skin will thank you for it.

If you’re the type of person who hoards cans of food as if you’re preparing for the apocalypse, STOP IT. For starters, the end of the world is not 'nigh (I don’t care what that dude’s sign in Union Square says), and even if it was, you’d be sick of lima beans after two days, so you’d be fucked anyway. Besides, think of how much your local soup kitchen would love all those can goods. Buy some fresh produce instead.

Yeah, we said it. If you’re spring cleaning the outside of your body, why wouldn’t you want to spring clean the inside, too? I had a colonic once (and honestly, I felt like I was stoned as hell after it), but my fellow writer and friend Amelia McDonell-Parry, EIC of The Frisky , was kind enough to give a play-by-play of her colonic experience. Does it hurt? No. Are they literally sucking shit out of your bottom? No.

Instead, "a tube the circumference of my pinky finger" was "inserted in the rectum” and it gently flushes out all that waste by loosening "the gunk inside your intestines that doesn’t come out during your daily bowel movements." Just think about all those years of waste being removed! Why wouldn’t you want to spring clean that stuff out of your life?

GIVE YOUR CAR A MAKEOVER

Similar to all the dirt that corrodes the floor of your home, that junk is also doing the same thing to your car (if you're so unlucky as to need one, that is). Wash the outside of your car — by hand if you have the patience — and pay special attention to the wheels. Make those headlights shine again as if they’re pearly new, and vacuum all that salt and sand from the floor mats. Love your car and it will love you back. Too bad the same can’t be said for every person you meet.

Why? Because just like your skin, your hair has dried the hell out from the winter and it deserves just as much love and attention as everything else on this list. Maybe you can even try out the cut of the year.

Yes, in a land far, far away... where dust bunnies are real bunnies and the Polar Vortex is just the stuff of fairytale villans, your hair and skin will always look fresh and you won't even need a jacket. Welcome to spring.

More like this
64 Genius Gift Ideas For Every Single Guy In Your Life
By Teresa Newsome, Mia Mercado and Brittany Leitner
How To Incorporate Goblincore Into Your Home Decor This Fall
By Alexis Morillo
The 5 Best Sheets For Your Purple Mattress, According To Reviewers & The Brand
By Vanessa Spilios
The Industrial Home Decor Aesthetic, Explained
By Emma Carey
Get Even More From Bustle — Sign Up For The Newsletter