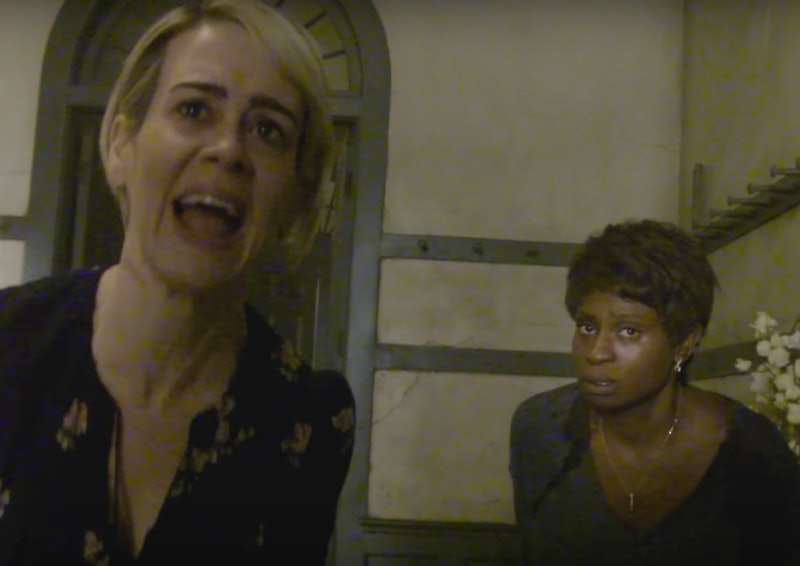 In order to survive the woods after being cast out by her fellow colonists, Thomasin White was saved by the witch in the wood back in the 1500s and became the blood-thirsty Butcher. And now, in modern times, it looks like Lee is the new Butcher on American Horror Story. After being left in the woods by Monet and Audrey, the witch of the wood encountered Lee and offered up a pig's heart for her to eat. And with that, the Lee that fans (real and fictional) had come to know from My Roanaoke Nightmare sold her soul to the witch.

The real Butcher is still kicking around on the property, so Lee hasn't necessarily replaced the OG colonist killer. But Lee has joined her ranks in becoming a deranged murderer to stop the living from occupying the land. Yes, Lee may have been a murderer before when she killed her ex-husband Mason, but she has officially lost it — all thanks to the witch of the wood.

Just like My Roanoke Nightmare had shown Kathy Bates' Thomasin dying in the woods alone when she was saved by Lady Gaga's witch (through reeanactments, of course), a similar scenario happened to Lee. She was injured by the Polks because they freakin' ate her flesh and when the witch produced a pig's heart for her eat, she took the chance to be saved with no hesitation. Except that meant selling her soul to the witch, which made her murder Monet, attempt to murder Audrey, and conduct some human sacrifices on the two fans of My Roanaoke Nightmare .

Although Lee seemed back to her normal self after the Blood Moon had passed and the police found her, she was still responsible for a ton of deaths. Audrey didn't forget that and tried to kill her — but was killed by the police in the process. Lee ended up being the only survivor of Roanoke, but it came with a price — and a mighty big one at that.

More like this
Everything You Need To Remember Before Westworld Season 4
By Brad Witter
What’s New On Netflix: 'Stranger Things' & 'Mean Girls'
By Arya Roshanian
At 14, Kate Berlant Had A Wheelie Backpack & One Line In 'Lizzie McGuire'
By Samantha Rollins
Don't Expect To See Your Fave Modern Royals Depicted On 'The Crown' Season 6
By Jack Irvin
Get Even More From Bustle — Sign Up For The Newsletter