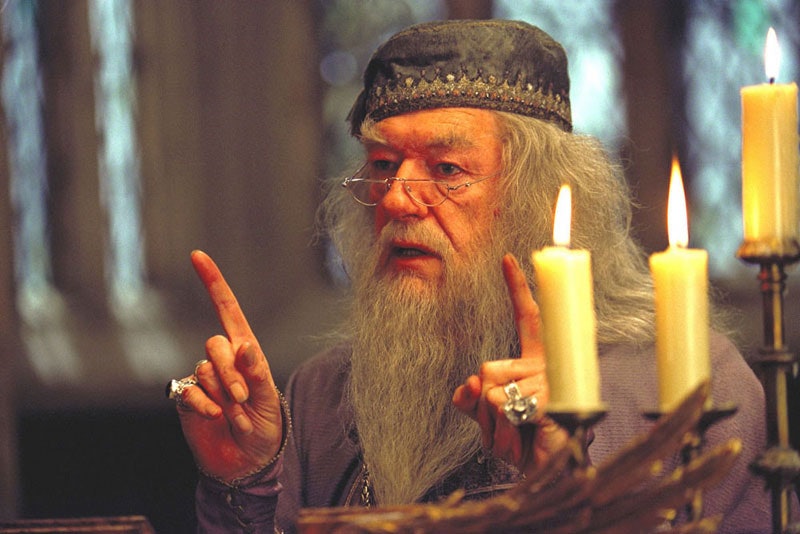 Sometimes Harry Potter is exactly what you need to make a situation better. Ever since the book series was released, it has been providing hope and inspiration to fans. That's just how powerful J.K. Rowling is. So, if you're in need of a little pick-me-up in the aftermath of Tuesday's election, the following words of wisdom may ease your pain. Here are 23 Dumbledore quotes many can relate to after the 2016 election. He never failed in providing words of wisdom, nor did he ever stop in trying to lead and mentor Harry.

It's kind of scary how much of what Dumbledore said in both the books and the films corresponds to how many are feeling ever since Donald Trump beat Hillary Clinton and became president-elect. If Emma Watson's hopeful tweet didn't suffice, then maybe Dumbledore can help guide you to a more peaceful and positive place. Really, the following quotes just might even make you look at the 2016 election in a whole new light and even give you that fighting power you've been searching for.

With that, let Dumbledore be your voice of reason for a short while and here's hoping he can help make you feel at least a little bit better, esepcially since it's obvious he understands exactly where you're coming from.

1. "It is our choices, Harry, that show what we truly are, far more than our abilities."

2. "Happiness can be found even in the darkest of times, if one only remembers to turn on the light."

3. "Words are, in my not-so-humble opinion, our most inexhaustible source of magic. Capable of both inflicting injury, and remedying it."

Isn't that the truth?

4. "Do not pity the dead Harry. Pity the living, and, above all, those who live without love."

Love is so important right now.

5. "Numbing the pain for a while will make it worse when you finally feel it."

As hard as it might be, sometime it's better to feel pain.

6. "You care so much you feel as though you will bleed to death with the pain of it."

This one probably hits home for many.

7. "It is the unknown we fear when we look upon death and darkness, nothing more."

Not knowing what will happen can sometimes be the worst.

8. "Age is foolish and forgetful when it underestimates youth."

This one is for millennials.

9. "It does not do to dwell on dreams and forget to live, remember that."

Don't give up on life and your future.

10. "Remember, if the time should come when you have to make a choice between what is right, and what is easy, remember what happened to a boy who was good and kind and brave because he strayed across the path of Lord Voldemort."

Some important food for thought.

11. "The truth. It is a beautiful and terrible thing, and should therefore be treated with great caution."

Isn't that the truth?

12. "It is a curious thing, Harry, but perhaps those who are best suited to power are those who have never sought it."

13. "It is important to fight and fight again, and keep fighting, for only then can evil be kept at bay though never quite eradicated."

Always speak your mind, no matter who it may be to.

15. "It is my belief that the truth is generally preferable to lies."

16. "Soon we must all face the choice between what is right, and what is easy."

A lot of people can probably relate to this one right now.

18. "Youth cannot know how age thinks and feels, but old men are guilty if they forget what it is to be young."

19. "While we may come from different places and speak in different tongues, our hearts beat as one."

We are stronger together.

20. "This pain is part of being human . . . the fact that you can feel pain like this is your greatest strength."

21. "As much money and life as you could want! The two things most human beings would choose above all — the trouble is, humans do have a knack of choosing precisely those things that are worst for them."

Talk about a double meaning.

Unity is much more powerful than divisiveness.

Dumbledore really gets it, doesn't he?

More like this
Alan Rickman's Diary Reveals Why He Considered Leaving 'Harry Potter'
By Darshita Goyal
This Episode 6 Moment Foreshadows Viserys' Fate On 'House Of The Dragon'
By Grace Wehniainen
Nicola Coughlan Shared A Lady Whistledown Excerpt From ‘Bridgerton’ Season 3
By Grace Wehniainen, Alyssa Lapid and Sam Ramsden
Read The First Pages Of Emma Rosenblum’s Highly Anticipated Debut, 'Bad Summer People'
By Samantha Leach
Get Even More From Bustle — Sign Up For The Newsletter