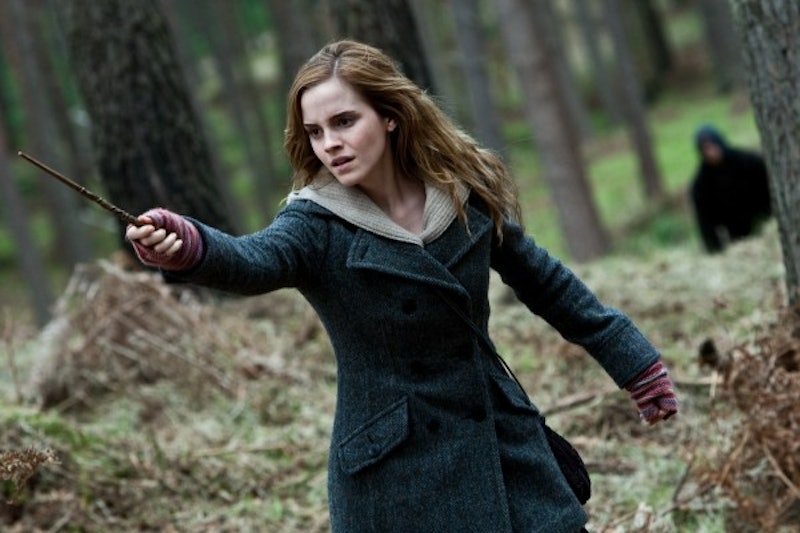 Brave. Heroic. Kind. The list of words to describe the characters in Harry Potter can go on forever. The one word that always pops into my head when I think about HP is "strong" — specifically for Harry himself. At 11, I was living my average elementary school life with recess, mediocre cafeteria food, and reading as many books as I could. I most certainly was not told I'm a wizard (though I desperately wanted to be), or was I facing the darkest wizard of all time. Harry Potter is as strong as they come, and J.K. Rowling was one of the first major influences in my life to teach me the importance of having inner strength.

I learned that strong friendships are worth everything. I learned that emotions didn't make me weak, but that experiencing pain and heartbreak made me stronger. I learned that you have to be strong in order to make difficult choices. All in all, it's safe to say that the reason we're all still so attached to the Harry Potter series is because it helped us grow into strong, independent, and nerdy adults.

There have been plenty of times where I've felt mentally weak and it's hard to gain the strength to keep trudging through the day. So if you're in need of a pick-me-up today, or maybe a friend of yours deserves to be reminded of how strong they truly are, I've gathered a few strong and important quotes about strength from Harry Potter.

1. "We are only as strong as we are united, as weak as we are divided."

2. "Remember, if the time should come when you have to make a choice between what is right and what is easy, remember what happened to a boy who was good, and kind, and brave, because he strayed across the path of Lord Voldemort. Remember Cedric Diggory."

3. "Harry, suffering like this proves you are still a man! This pain is part of being human … the fact that you can feel pain like this is your greatest strength."

4. "We must all face the choice between what is right and what is easy."

— Albud Dumbledore, Harry Potter and the Goblet of Fire

5. "It is important," Dumbledore said, "to fight, and fight again, and keep fighting, for only then could evil be kept at bay, though never quite eradicated."

6. "You might belong in Gryffindor,Where dwell the brave at heart,Their daring, nerve, and chivalrySet Gryffindors apart..."

— The Sorting Hat, Harry Potter and the Sorcerer's Stone

7. "There are much more terrible things than physical injury."

8. "It's going to be all right, sir," Harry said over and over again, more worried by Dumbledore's silence than he had been by his weakened voice. "We're nearly there ... I can Apparate us both back ... don't worry ..."

"I am not worried, Harry," said Dumbledore, his voice a little stronger despite the freezing water. "I am with you."

9. "You're the weak one. And you'll never know love, or friendship. And I feel sorry for you."

9. "Lord Voldemort's gift for spreading discord and enmity is very great. We can fight it only by showing an equally strong bond of friendship and trust."

11. "It is a curious thing, Harry, but perhaps those who are best suited to power are those who have never sought it. Those who, like you, have leadership thrust upon them, and take up the mantle because they must, and find to their own surprise that they wear it well."