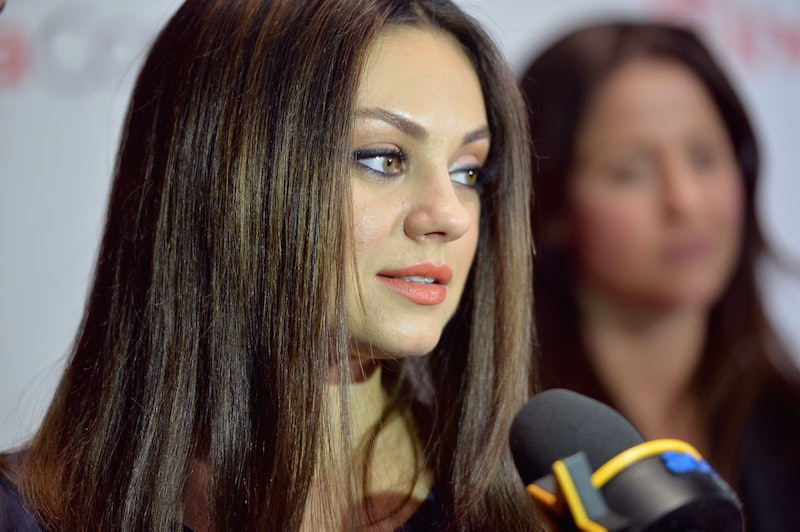 The future Mrs. Kutcher apparently needs a little bit of help when it comes to filming dangerous movies. Mila Kunis has said Channing Tatum "saved her life" when the two were filming Jupiter Ascending. Apparently, the two actors have become pretty darn close since filming the potential summer blockbuster.

When the two spoke to E! News at CinemaCon in Vegas, they expressed total adoration for one another (but in the friend-zone, ya'll). Tatum said:

It was fun. I've known Mila for a little while now, but we never really got the chance to hang out and get to know each other [...] And then in this seven month period, I don't think we had a day where we weren't literally stuck to each other.

Aww, BFFs. Well, you gotta be close with your screen partner when you're filming dangerous stuff. The movie, which is helmed by the duo behind The Matrix , the Wachowski brothers, looks pretty awesome. It follows Jupiter Jones (Kunis), a janitor who discovers that she has the same genetic code as The Queen Of The Universe, which means insanity will ensue! Tatum is supposed to assassinate her, but he ends up teaming up with her instead to form a really attractive duo.

As with any exciting feature, filming some of those more action-oriented scenes proved to be particularly physically demanding, causing the actors to go a little haywire... Kunis, in particular. Tatum pointed out that Kunis had some run-ins with the cameras. (In his words: "Mila almost had an unfortunate meeting three or four times with a camera or two.")

Kunis's response? "But Chan saved my life, literally." Tatum insists it was only once; the ever-so-humble actor said that it was the stunt guys who REALLY were her heroes. Fine and all, but can a stunt double do this?

Check out the trailer for the movie, which will arrive on July 18, below: