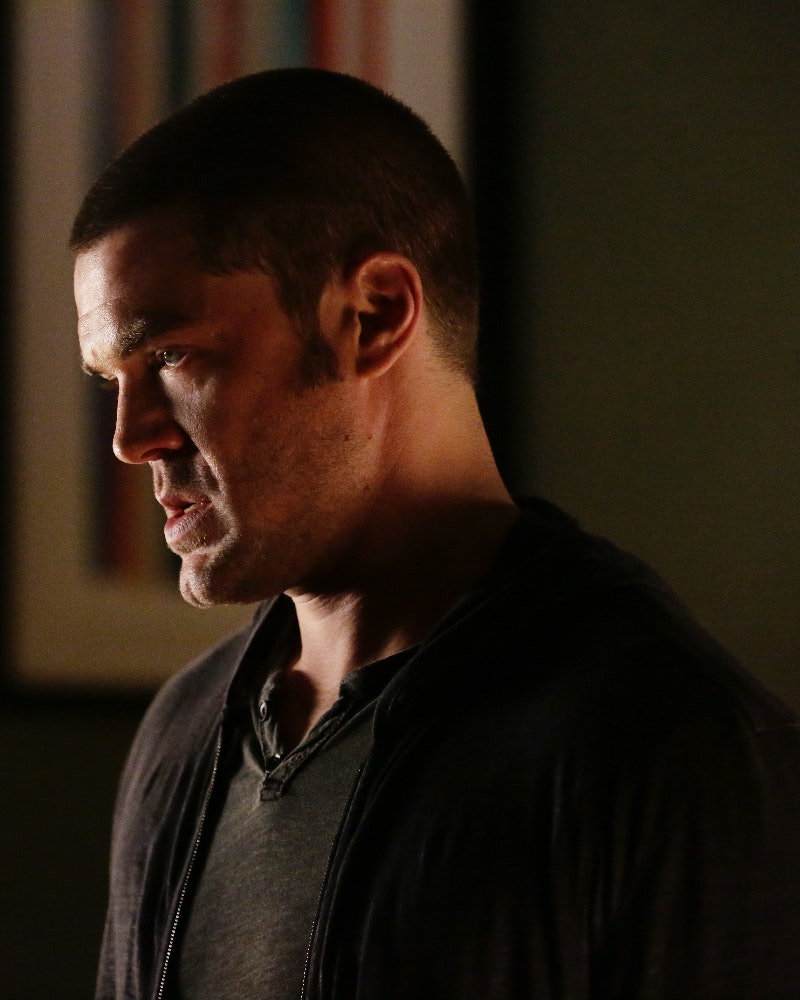 While the events of the fire on How To Get Away With Murder are still unclear, we are shortening the list of who could be dead. In Thursday's episode "No More Blood," Connor was eliminated. It sucks that he has spiraled so much that he hooked up with Oliver's former short-term flame, but at least he's alive. A confrontation towards the end of the episode hinted that Frank could be under the sheet on How To Get Away With Murder as his plan to re-enter Annalise's graces totally backfired.

This season, Frank has been going town to town attempting to fulfill his employer's darkest wishes like some kind of fairy god-murderer. First, he shoots Wes' father, then he offs Bonnie's abusive father, and finally went after the woman who hired him to crash into Professor Keating's car, which resulted in the death of her unborn child. It's an odd way to make amends, but the twisted logic is there.

Then, after confronting Laurel, he went to Annalise. Their argument ended in Frank holding a gun to his own head, Annalise begging him to pull the trigger, and Bonnie begging him not to. Woof. There's still a week between that scene and the house fire. I can't imagine how things manage to get even more intense. Plus, Laurel is definitely in the burning house, which does not bode well for Frank.

However, I personally don't think it is Frank that dies in the fire. However, Annalise is clearly very upset about who is under the sheet, and unless she was doing that to cover up her own crime, then that means it probably isn't Frank. Right? Plus, I think having Frank die after going on this revengeful redemption odyssey is far too easy. Maybe the guy under the sheet is that annoying kid from the law class. Maybe it's Nate. Maybe it's someone from a past mystery night, come back to haunt them. Maybe it's Wes' half brother, who Frank framed for killing their father. While it may seem like the options are dwindling down on HTGAWM, this show is good with twists — so I wouldn't ever settle on the obvious answer. There's almost always something more to it.

More like this
The ‘Squid Game’ Season 2 Renewal Teases A Creepy New Figure & A Return
By Brian Anthony Hernandez and Bustle Editors
What’s New On Netflix: 'Stranger Things' & 'Mean Girls'
By Arya Roshanian
At 14, Kate Berlant Had A Wheelie Backpack & One Line In 'Lizzie McGuire'
By Samantha Rollins
James Marsden Kept Teddy’s Westworld Season 4 Return A Secret “For Years”
By Brad Witter
Get Even More From Bustle — Sign Up For The Newsletter