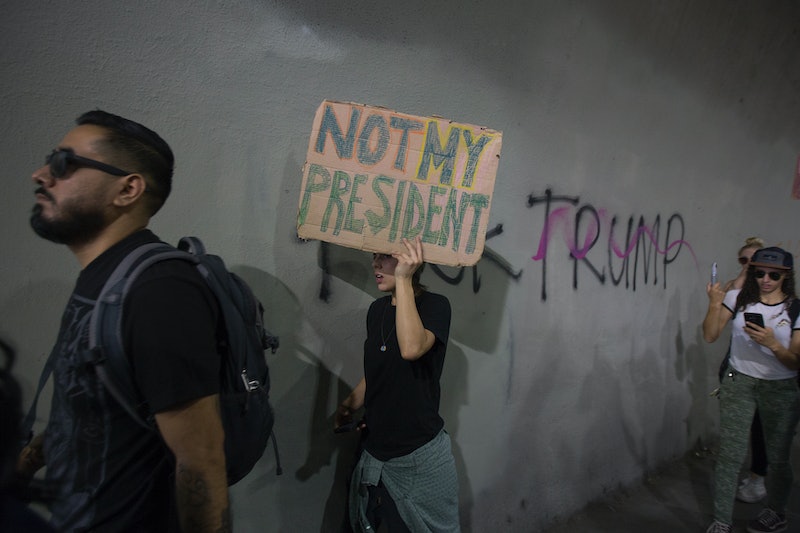 Mondays often bring a fresh start, an opportunity to leave a bad week behind and tackle life anew. But liberals woke up this morning to more of the same. Donald Trump is still President-elect — and despite a half-hearted admonition to his supporters to "stop it" with the hate crimes that spiked in recent days, he still demeans those protesting his election and all it implies, calling their numbers "small" and their fears "unfounded." In response, Dems are increasingly circulating articles and petitions giving shape to liberal fantasies about how Hillary Clinton could still be president.

Some focus on missing votes for Hillary Clinton and vote tampering, refusing to admit that Trump is the victor under our nation’s electoral process as it usually functions. Others say there's still more than one path to the White House: "faithless electors" could endorse the popular vote instead, or Trump could somehow be shown to fail to "qualify" for the presidency.

Even when accepting a Trump presidency, liberals continue to dream. Maybe Obama can secure a Supreme Court seat before leaving office! Maybe blue states can form their own country! Maybe California can play hardball, keeping Trump in line by threatening to withhold its natural and technological bounty. Maybe he won't be so bad?

The stages of grief shine forth — denial, anger, and bargaining are all represented as liberals grapple with their crushing new reality. But can any of these liberal fantasies about a Trump presidency actually happen? Let's take a look.

A Washington Post article written prior to election night has been making the rounds on social media. It contends that Hillary Clinton will “probably take more of the mail-in and provisional ballots that can’t be counted until the days and weeks after the election,” since these tend to lean left. The theory is that getting closer to Trump could place Clinton within recount range in several states. In that event, it’s anyone’s game. In 2000, Florida discovered 60,000 “undervotes” and 110,000 “overvotes” after election night.

Clinton could still win Michigan, which has yet to be called by CNN, and she’s only down by about 68,000 in Pennsylvania. In Wisconsin, she’s around 27,000 votes shy of Trump, which amounts to about 12,000 away from the state’s 0.5 percent recount threshold. Those three states would tip the balance. Alternatively, if Michigan, Wisconsin, New Hampshire, and Arizona are eventually called for Clinton, she and Trump would tie at 269 electoral votes, a widely-shared Newsweek article points out.

Could It Happen? The beauty of this vision is that Clinton would win under existing rules. The downside is that it’s basically impossible. Since Clinton would get more but not all of the absentee vote, the total number of missing ballots needs to be many times higher than the distance she stands from recount territory. Even more mathematically damning, of these states, only Arizona offers widespread mail-in voting. It just won't fly.

Under this conspiracy theory, the results are just too awful to be true without interference from Russian hackers. A petition calls for a bipartisan audit of the election results pointing to irregularities, like the county in Texas that elected the state’s first African American female sheriff but went to Trump.

Could This Happen? Despite tampering fears — including of "fractional magic" software used in 20 states that apparently allows for ballots cast for a particular candidate to be counted as a fraction of a vote, undetectably and with whole numbers ultimately being reported — there’s no known evidence to back this one up.

A popular New York Post article raises the specter of “faithless electors,” those electoral voters who follow their conscience or the national popular vote rather than supporting the candidate chosen by the voters in their state. It doesn’t happen often, but it does happen. Only 24 states bind their electors, and even then, usually only a monetary fine stands in the way of going rogue.

A Change.org petition, urging those pledged to Trump to support Clinton instead when the members of the Electoral College convene on December 19 in their respective capitals to vote, already has more than 4 million signatories, and others have talked about crowdfunding to cover the expenses of faithless electors. A Huffington Post writer argues that the action isn’t just legal, it’s the only way to honor the Constitution: “the Electoral College ... was designed to prevent just this situation: the rise of an unqualified demagogue like Donald Trump.”

Could This Happen? Most estimates put the number of GOP electors who would need to flip at around 40. That’s 40 of the Republican faithful who have to not only lose their faith but also simultaneously declare allegiance to the religion they’ve spent years denouncing. Even if 40 voters did go rogue, a joint session of Congress will still convene on January 6 to decide whether the electoral votes are “regularly given.”

Historically, this review has been about process, screening for things like double votes. Now, theoretically, a pro-Clinton decision wrought by faithless electors could just get rubber-stamped as usual, but the odds of that happening in a Republican-controlled Congress are slimmer than Kate Moss in 1993. Paul Ryan and crew would undoubtedly take the “regularly given” law to empower them to intervene.

If the Senate and House agree to reject the flipped votes, it would leave neither candidate with 270. When that happens, the House gets to choose from the three candidates who received the most electoral votes. That would include Clinton, Trump, and a third option for whom almost no one in the country voted. If the two chambers split on what to do, things only get worse.

So it technically could happen. The question is how many of our electors are willing to brave a constitutional crisis and backlash from millions of angry people who cast their votes for Trump.

One point of great frustration for some liberals is that even if Trump were to suddenly change his mind about the whole being president thing, the country would still be stuck with Mike Pence. Others point to the 20th Amendment. It provides that the laws of succession kick in only after a nominee officially becomes president-elect. There’s an argument to be made that if Trump were to somehow “fail to qualify” before the Electoral College votes (or, some say, between then and the January 6 session of Congress), the country wouldn’t even be stuck with Mike Pence.

Could This Happen? If Trump were convicted of treason or another serious crime in the next month and a half, liberals could well be rid of these "horsemen of the apocalypse." Since our justice system just doesn't move that fast, however, this ultimate flight of fancy is about as likely as Tina Fey is funny. Which is to say, it's very, very, very unlikely.

Another article, written in April, has been widely recirculated. In this one, lawyer Gregory L. Diskant argues it’s possible to read the Senate’s refusal to act on Obama’s Supreme Court nomination as a waiver of its constitutional right to provide “advice and consent.”

Could This Happen? Unfortunately, most lawyers on both the right and left reject the argument for a variety of reasons. That means the odds of Obama, a notorious stickler for procedural regularity, even attempting the maneuver are about nil, no matter how many people sign this petition, or this one.

The hashtag #Calexit is being used by YesCalifornia.org as a shorthand for its efforts to “qualify a citizen’s initiative for the 2018 ballot that if passed would call for a special election for Californians to vote for or against the independence of California from the United States.” TechCrunch describes #Calexit as “Silicon Valley’s plan to pack up its toys and leave.”

Could This Happen? Because the movement is avowedly non-violent and the other states aren’t likely to let California simply ride off into the sunset, among other reasons, it’s likely a non-starter.

Along similar lines, Facebook has been host to quite a bit of chatter saying those on the West Coast ought to cease purchasing products produced in “Trumpland.” Others suggest California leverage its economic might — as well as access to goods like fruit, wine, nuts, and, you know, technology — to keep Trump from fulfilling some of his more unsavory campaign promises.

Could This Happen? A strongly-worded joint statement from California legislative leaders suggests these scenarios are the most likely of the bunch: “We will lead the resistance to any effort that would shred our social fabric or our Constitution.”

Fantasy Scenario #8: Maybe Trump Was Just Pretending To Be Conservative?

After visiting the White House, Trump tweeted that he and the president had a “really good meeting” with “great chemistry.” He also said he’d seek Obama’s “counsel” in the future. Maybe he’ll realize he’s in over his head and lean on personable Obama more with each passing day. Our beloved will become puppeteer and all will be right once more.

Or maybe Trump has been a liberal mole all along. After all, Melania sent us signals, little sartorial winks. She wore a pussy bow after her husband was outed as a grabber of them and donned a white pantsuit on election night. What if those weren't just petty digs at feminists? What if Trump really has been engaging in a form of performance art meant to teach us what is rotten in the State of Denmark?

Could This Happen? Considering who Trump's transition team is made up of, it sure doesn't look likely. But hey — we can still dream.