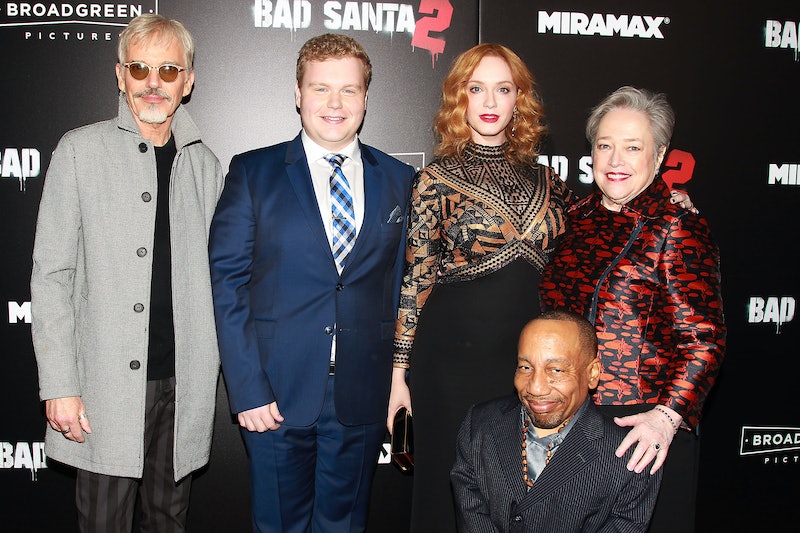 As much as we might like to believe otherwise, we all have to find out that Santa Claus isn't real at one point or another — and that, at least in the world of pop culture, he's not necessarily even that G-rated. For some people, the 2003 dirty comedy Bad Santa was the first piece of pop culture to spoil the image of Santa Claus in their minds forever, and now, there's a sequel, Bad Santa 2, set on erasing the legend's crystal-clean rep for good. Thanks to those naughty jokes and filthy senses of humor, both movies let audiences escape the traditional holiday cheer while still managing to put a smile on their faces, and at the premiere of Bad Santa 2 in New York, the movie's stars shared their own funniest Christmas memories with Bustle. Even though they aren't as bad as some of the scenes in Bad Santa and Bad Santa 2, the stories could definitely be fodder for a third movie, if one were to happen.

"My little cousins watched Bad Santa one year thinking it was an actual children's movie," said Cristina Rosato, who plays Alice Johnson, a co-worker of Ryan Hansen's and Christina Hendricks' characters at the Giving Cities charity. "It was like swearing and sex and everything, so that was pretty funny."

Even if Bad Santa 2, out Nov. 23, is a Christmas story (of sorts) with some wild stories that seem impossible to top, some of the stars' Christmas memories seem equally as dangerous as what Willie and Marcus get up to in the film. "I'm from Minnesota and we used to drive from there to Rome, New York every year for Christmas," said Jenny Zigrino, who plays Gina the security guard. "One year, my sister — she was maybe six and I was five — while my dad was driving, she put her hands over her eyes and said 'Guess who?' in the middle of driving." Luckily, Zigrino and her family made it out of that drive safely.

Kathy Bates, who plays Sunny, Willie's horror story of a mother, didn't share a funny holiday memory of her own, but she did reveal her favorite scene to shoot for Bad Santa 2. "I don't want to spoil it for you, but let's just say there's a scene with me and Billy Bob in a van after we've ripped off a bunch of rich people, and that was one of my favorite scenes," Bates revealed.

Needless to say, with almost the entire original cast and Bates on board, the sequel is bound to have just as many — if not more — laughs than the original, and maybe even a more Christmassy feel. "I think the second one is just as funny, if not funnier because it's aged really well," Zigrino said. "It's more modern. It's updated. It's just a good movie. I think everyone is going to be so happy with it. I'm happy with it, and I'm not happy with anything."

Back in 2003, the original Bad Santa showed audiences just how hilariously real life can get during Christmas time, and that not all Santas are as chipper and loving as they might seem at first glance. This film has become a funny and surprisingly sweet holiday classic for anyone looking to celebrate Christmas with a stumbling Billy Bob Thornton, and the star himself shared some words of hope for Willie and his role in the sequel. "At the end of the day this scrooge has got a heart," Thornton said at the premiere. "At the end of the day, even the loneliest drunk needs love, needs to have a little hope."

Sounds like the kind of message perfectly fitting for a movie that combines Christmas cheer with plenty of R-rated hijinks.