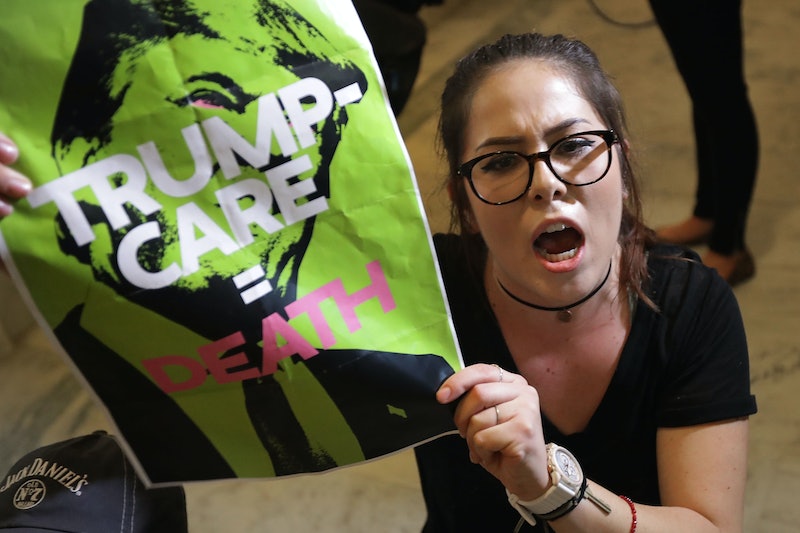 Donald Trump's comments about women and sexual assault have left a lot of people feeling triggered and concerned about survivors in this country. We probably can't change the fact that he'll soon be president, but we can support organizations for sexual assault survivors in order to combat the attitudes he and his affiliates have expressed. Our donations, time, or skills can go a long way toward making sure people have the resources they need to heal from sexual assault as much as they can — and to help prevent it from happening in the first place.

This issue came to the forefront of the election when a leaked tape from Access Hollywood caught Trump saying on a hot mic, "I'm automatically attracted to beautiful [women]. I just start kissing them. It's like a magnet. I just kiss, I don't even wait. And when you're a star, they let you do it. You can do anything — grab them by the p*ssy." Many saw these comments as condoning sexual assault, and sexual assault survivors took them as evidence that as president, Trump would likely not stand with them.

Here are some organizations that do stand with sexual assault survivors that you can support if you want to do something to counteract any harmful policies that may come about when Trump is president.

RAINN provides a hotline for people who have been sexually assaulted to speak with a counselor, and it's needed now more than ever. After Trump's Access Hollywood tape leaked, its calls increased by a third. RAINN also has a petition that lets you ask Congress to do what it can to prevent sexual assault.

NAESV is a partnership between federal and state governments and local organizations working to pass legislation that helps sexual assault survivors. The group helped establish the government-funded Sexual Assault Services Program to provide services to survivors and reauthorize the Violence Against Women Act. Donations will help experts conduct research on sexual assault policy and meet with policymakers in Washington to give recommendations.

Several Trump campaign officials have expressed plans to go easier on Title IX enforcement and possibly get rid of the the Department of Education and Office of Civil Rights, which have largely run the effort against campus assault under President Obama. To take this issue into your own hands, you can donate to EROC, which works with students and administrators to put the best possible sexual assault policies in place and support survivors on college campuses.

Along the same lines, Know Your IX helps educate students on their right to attend college without being subject to sexual harassment and assault and to push for stricter enforcement of Title IX. In addition to donating, it provides resources on changing your own school's policies and supporting survivors in your life.

The Grateful Garment Project's mission is to give sexual assault survivors who have gone to the hospital and had to forfeit their clothes for the purpose of providing DNA evidence "a fresh change of clothes and the sense that people care," which is especially important when some of our country's leaders act like they don't care. Donations can help fund outfits for survivors to wear home from the hospital.

No matter what our governments are doing, we always have the option to organize and take action on a local level. PAVE empowers people to do this by teaching students, military members, and community leaders how to fight and respond to sexual violence. Aside from giving your money, you can help start a chapter or hold an event at your school or in your community.