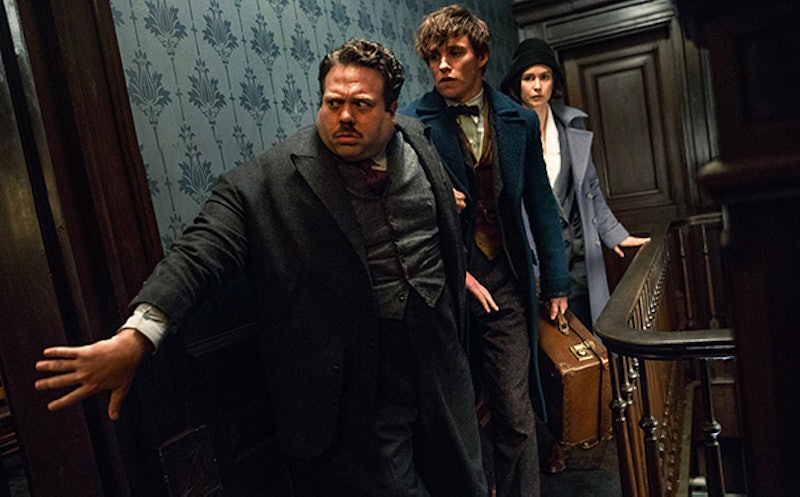 The book is not a novel, and has no real story. Instead, it's a textbook purported to be used by Harry, and is "authored" by Newt Scamander — the protagonist of the film. The book, said to be published in 1927, catalogs 85 different magical creatures, with descriptions penned by Newt following his travels across five continents. It was this bit of information that was used as a jumping off point for Rowling in writing the film. And while the film does feature a number of beasts who are featured in the book, including the Occamy, the Bowtruckle, and the Demiguise, the main focus of the film isn't really about them. Instead, the movie is about Newt's trip to New York City in 1926 with several beasts in tow, some of whom escape, which leads him to discover an even bigger problem.

That is merely the most simplistic telling of the movie's premise — an admittedly thin plot for what's going to be a five film franchise. In actuality, Rowling is telling a much bigger story; one that involves the first time a dark wizard threatened the world (Grindelwald), the early life and evolution of Dumbledore, and, at least according to some theories, the origin of Voldemort. Rowling herself basically shot down the idea that the franchise is based upon the Fantastic Beasts book last month when a fan on Twitter asked the author if she thought five movies was excessive with just one book of material to go off of. "I think, when you realize what story we're *really* telling, you'll understand that it can't possibly fit in one movie!" was Rowling's response.

Rowling has also revealed that the new series will function as a prequel of sorts to Harry Potter — something that the book isn't in the slightest. "There are ways in which we connect to the Potter books that I think people will find surprising," she said in a promotional video for the film. "We're talking about the first time a wizard rose and threatened the world order. This was always where I was interested in going. This is what I wanted to do."

Fantastic Beasts and Where to Find Them is ultimately more connected to the Harry Potter books than it is to the book from which its title derives, which should be pretty exciting news for fans of the Boy Who Lived.

More like this
Harry Potter's Viktor Krum Has Undergone A Huge Transformation Since Hogwarts
By Sam Ramsden and Meguire Hennes
'The Lord of the Rings: The Rings of Power' Revisits Iconic Spots From 'The Hobbit'
By Darshita Goyal
Nicola Coughlan Shared A Lady Whistledown Excerpt From ‘Bridgerton’ Season 3
By Grace Wehniainen, Alyssa Lapid and Sam Ramsden
Everything You Need To Know About 'Rings Of Power' Actor Charlie Vickers
By Darshita Goyal
Get Even More From Bustle — Sign Up For The Newsletter