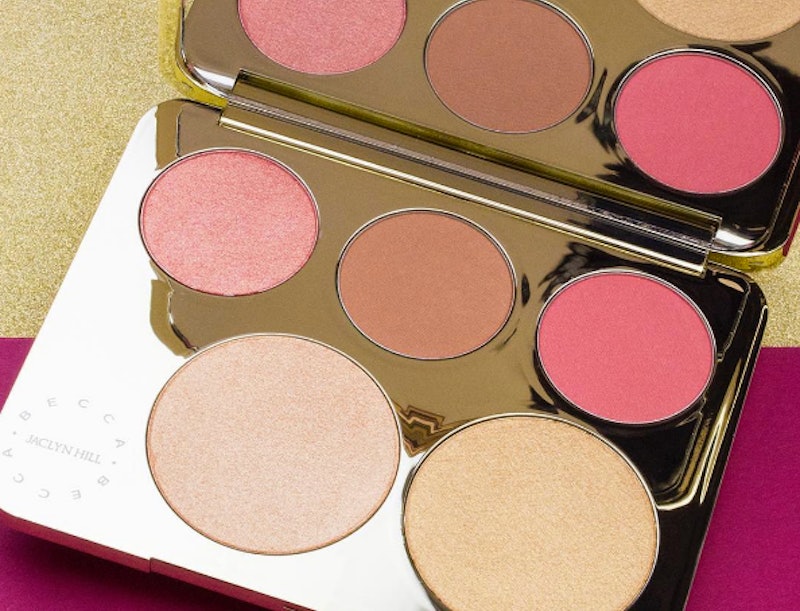 According to social media, the Becca x Jaclyn Hill Champagne Glow Palette might be making a comeback. *Cue the excited scream.* There's a catch though. Whether or not the palette will make a holiday appearance all depends on how social media votes. Although all signs point to the palette hitting shops again, it'll all come down to the votes.

In case you've been living under a rock for the past year, let me break it down for you. The highlight madness all started when YouTuber Jaclyn Hill created Champagne Pop for Becca. The shade was so well received that it became permanent. Not long after that, the company decided to have her create a brand new highlighters shade to put in a palette. Cue the Champagne Glow Collection. Fans freaked out and it sold out super fast pretty much everywhere.

The company said that once it was gone, it was gone for good. Thankfully, they've decided to let their fans decide if it should come back again. All you have to do is head over to Becca's Twitter and cast your vote. It should be a no-brainer for it to come back, right? Well, believe it or not, there are some people who have voted no.

Basically, you should stop what you're doing and go cast the Twitter ballot right now. If the palette does make a holiday comeback, there will only be limited quantities available. It'll pretty much be like the Hunger Games, beauty edition. According to the poll, it would only be available in the United States and Canada as well.

According to social media, the Champagne Glow Palette would also only be available on the Sephora website for a limited time. I'm willing to bet that it won't even last hours, if it does make a comeback. Either way, this is one heck of a holiday gift!

What are you waiting for? Go head to Twitter and vote right now! Your voice matters, beauty lovers. The future of the Champagne Glow Palette depends on you.