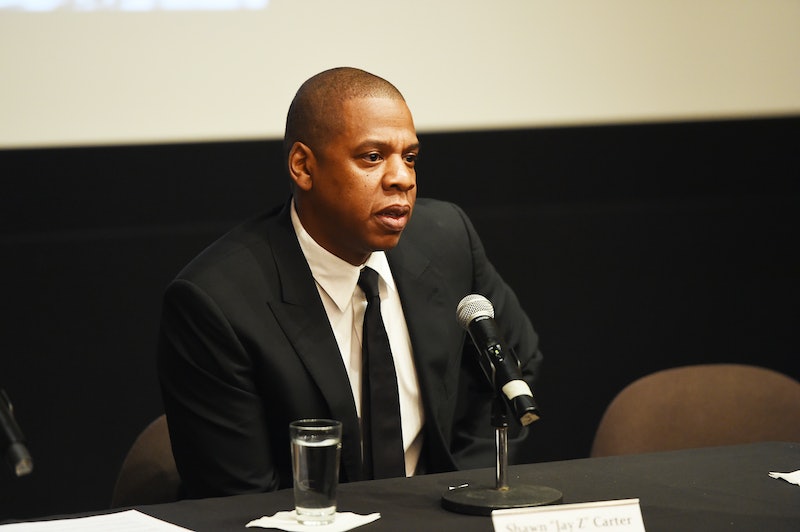 The complicated news that Prince's record label is suing Jay Z for illegally streaming Prince's music in TIDAL is a little hard to wrap your brain around, so let's take it from the top. Prince's NPG Records is suing Jay Z's record label Roc Nation for illegally streaming Prince's music on Tidal. TMZ reports that "according to docs," Prince struck a deal with Tidal, giving them the rights to stream Hit N Run: Phase 1 , the last album Prince created prior to his death. But, on June 7 this year (which fans will recognize as Prince's birthday), Roc Nation made an additional lesser-known 15 Prince albums available for streaming on Tidal. The upshot? Tidal had become the go-to site for Prince's music, offering an unparalleled online collection of Prince hits. Which would all be fine and dandy if it wasn't, ahem, quite the agreement Prince had signed — at least according to his record label.

Bustle has reached out to TIDAL, Roc Nation, and Prince's representatives for comment, but did not receive a response at the time of publication. However, according to reports, NPG is now arguing that none of this was authorized by the artist himself. The suit sounds fairly aggressive: they're not just suing Roc Nation for copyright infringement but also "to block any continued streaming of his music... outside of that final album." The estate is seeking damages and to cover their attorneys' fees.

According to Pitchfork, the case might be more serious than how it was initially presented by the first media outlets who reported on it, TMZ and The Star Tribune. Pitchfork claims that TIDAL only had an approval for a "90-day period of streaming exclusivity" for Hit N Run: Phase 1. Pitchfork also claims that, according to NPG, no attempt was made by TIDAL's camp to reach out to NPG following the artist's death. Meanwhile, according to Rolling Stone, NPG also argues that there's no proof that Roc Nation paid Prince the $750,000 advance promised for the TIDAL-exclusive record Hit N Run: Phrase 1.

However, it's not a cut and dried case. Roc Nation has filed a petition alleging that the agreements they had made with Prince came in “both oral and written” form. While it's hard to tell what Prince himself would have wanted, following the TIDL agreement, Rolling Stone cited a statement made by Prince in June 2015:

"After one meeting, it was obvious that Jay Z and the team he has assembled at TIDAL recognize and applaud the effort that real musicians put in2 their craft 2 achieve the very best they can at this pivotal time in the music industry. TIDAL have honored Us with a non-restrictive arrangement that once again allows Us to continue making art in the fashion We've grown accustomed 2 and We're extremely grateful 4 their generous support."

The statement suggests a certain amount of good will between Jay Z and Prince, so here's hoping the case gets resolved swiftly, and clarity is restored to the situation. Prince's music is far too happy for this amount of strife to be associated with it.