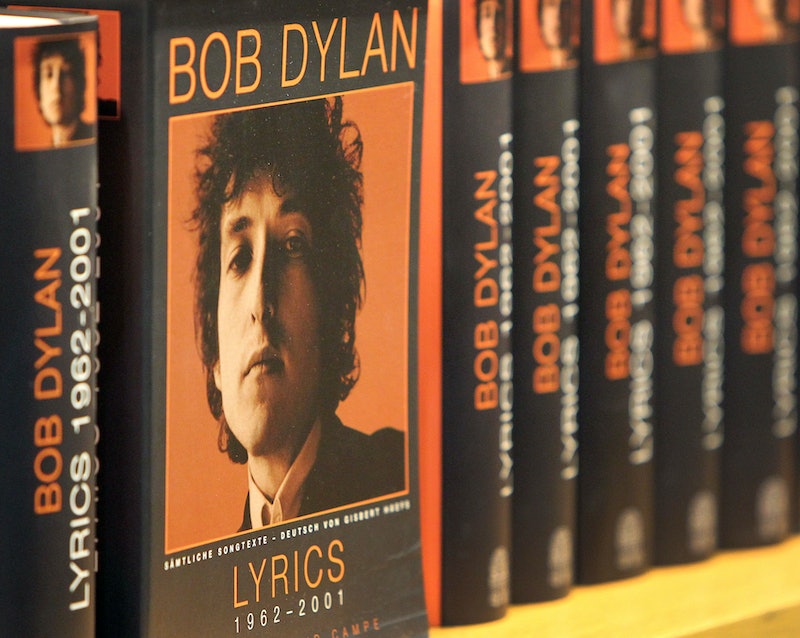 Ever since we found out that he won the Nobel Prize in Literature for 2016, the public has waited with bated breath and wondered if Bob Dylan would show up to receive the honor in person. Well, folks, the Swedish Academy finally has pinned down the answer that was blowin' in the wind, and it looks like Bob Dylan isn't attending the Nobel Prize Ceremony. According to a press release, the award-winning musician declined, politely, to attend, citing his previous commitments.

To be honest, the revelation that Bob Dylan isn't attending the Nobel Ceremony doesn't surprise anyone all that much. The Swedish Academy announced that the infamously private musician won the award on Oct. 13, but Dylan didn't acknowledge the win until a short note appeared on his website. That note was later excised, leaving journalists and fans to wonder how Dylan really felt about the whole Nobel to-do. In late October, he finally spoke out, telling The Telegraph he would "[a]bsolutely" attend the ceremony, "[i]f it's at all possible."

Unfortunately, it looks like it wasn't possible for Dylan to work the Stockholm-based Nobel Prize Award Ceremony into his busy schedule. From the Swedish Academy press release:

Yesterday evening the Swedish Academy received a personal letter from Bob Dylan, in which he explained that due to pre-existing commitments, he is unable to travel to Stockholm in December and therefore will not attend the Nobel Prize Ceremony. He underscored, once again, that he feels very honored indeed, wishing that he could receive the prize in person.

It isn't unprecedented for a laureate to decline the invitation to the Nobel Prize Ceremony. Even if Dylan were to have refused to receive the award at all, the Swedish Academy would continue to list him as its recipient, simply because "[t]he prize still belongs to [him]." As Dylan is not declining the Nobel Prize in Literature outright, he will be expected to give his Nobel Lecture within six months of the Dec. 10 awards ceremony.

The Nobel Prize Award Ceremony will be held in the Stockholm Concert Hall on Dec. 10 at 10:30 A.M. EST. You can watch the event live on the Nobel website.